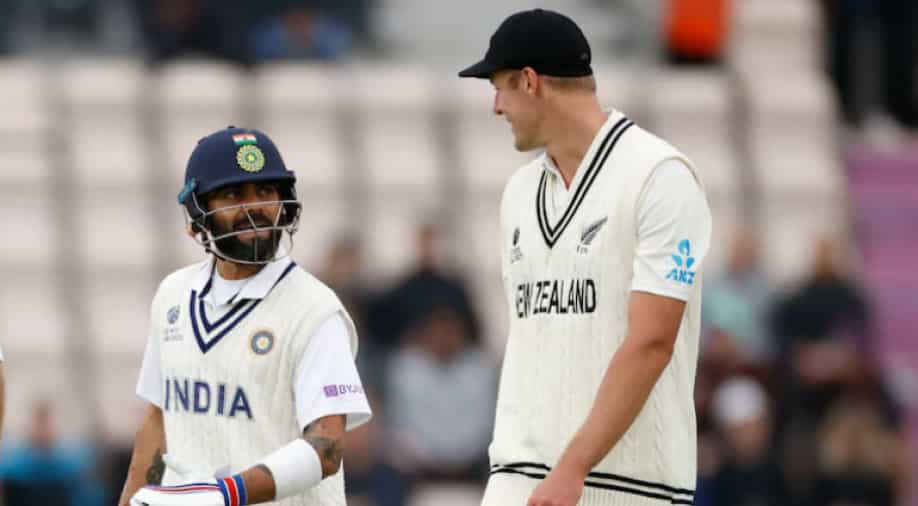 Kyle Jamieson has opened up on his now popular interaction with Virat Kohli, discrediting reports that the Indian captain asked him to bowl with the Dukes ball during IPL 2021.

Kyle Jamieson has opened up on his now popular interaction with Virat Kohli, discrediting reports that the Indian captain asked him to bowl with the Dukes ball during IPL 2021.

The story got features in the development to the World Test Championship last, with Dan Christian specifying how Virat Kohli had presumptuously asked Kyle Jamieson to bowl him with the Dukes ball in the nets.

However, Kyle Jamieson as of late put any misinformation to rest. Addressing Sporting News, he clarified how the interaction wasn't however fascinating as it might have been described. He said: “No, it wasn’t so much him asking. I think it was Dan just sort of adding some stuff for a good story. We were just talking about it at the start of the IPL with the cricket coming up with our UK tour and theirs as well and I mentioned that I had some Dukes balls, he had some Dukes balls as well.”

He dismissed Virat Kohli in the two innings at the Rose Bowl in Southampton, with Kyle Jamieson letting it out was engaging to face his IPL captain.

“Yeah, it was good, obviously, just being in the change room with him for six or so weeks was pretty cool. He's a world-class player and just to spend time observing how he operates and how he goes about things both on and off the field was pretty cool and you know it's nice just to be able to be friendly out in the middle even just having a bit of a laugh and a joke, while the game was going on."

While many feel Kyle Jamieson's time at RCB assisted him with improving Virat Kohli, the Kiwi pacer wasn't too certain whether that was the situation: “There wasn't too much specificity around in there having a game but yeah just nice to obviously have that relationship with someone I guess of his stature in the game. I don't know if that helped specifically around different queues and stuff but wasn't something that I necessarily contemplated."

"I think anytime you get to spend time with different world-class guys you sort of grow in confidence, you learn and become a bit more, I guess, comfortable, we come up against different guys so yeah, certainly, I guess from that perspective," he added.