Cricket: ICC announces player of the month nominations for June 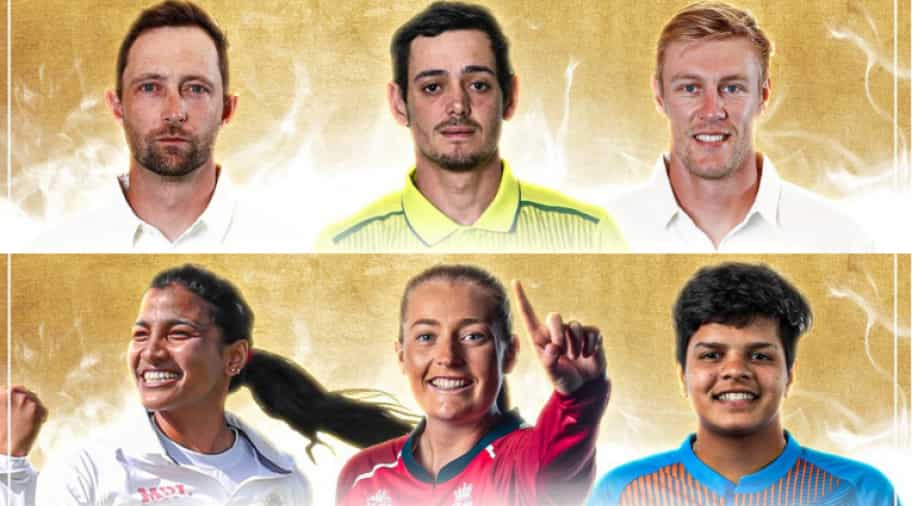 The International Cricket Council announced the nominees for May’s ICC Player of the Month Awards to recognize the best performances from both male and female cricketers across all forms of international cricket.

The International Cricket Council announced the June nominees for the ICC Player of the Month awards, instituted in January this year to recognize the best international performances across formats for male and female cricketers.

The nominees for the monthly men’s awards this time are Devon Conway, Quinton de Kock, and Kyle Jamieson while Sophie Ecclestone, Sneh Rana and Shafali Verma figure in the women’s shortlist.

An independent ICC Voting Academy* and fans around the world will now vote to decide the winners, which will be announced on Monday, 12 July. Fans registered on icc-cricket.com/awards can cast their votes till Sunday.

ICC Men’s Player of the Month Award nominees for June:

Devon Conway (New Zealand)
Opener Devon Conway smashed a double century on Test debut at Lord’s to enter the MRF Tyres ICC Men’s Test Player Rankings in 77th position with a record 447 rating points, the highest for a New Zealand batsman on debut and the third-highest ever on debut. He followed it up with half-centuries in his next two Tests, including the ICC World Test Championship Final, to aggregate 379 runs at an average of 63.16.

Quinton de Kock (South Africa)
Wicketkeeper-batsman Quinton de Kock finished as the Player of the Series against the West Indies, notching an unbeaten 141 in the first Test and 96 in the second Test for an aggregate of 237 runs at an average of 118.50. In three T20Is against the same side, he scored 135 runs at a strike rate of 142.10.

Kyle Jamieson (New Zealand)
Fast bowler Kyle Jamieson was the Player of the Match in the ICC World Test Championship Final against India in Southampton, finishing with match figures of seven for 61. He dismissed India captain Virat Kohli in both innings, while his other scalps included Rohit Sharma, Cheteshwar Pujara, and Rishabh Pant. He played two Tests during the month, finishing with 10 wickets at an average of 17.40.

ICC Women’s Player of the Month Award nominees for June:

Sophie Ecclestone (England)
The left-arm spinner was the most successful bowler in the one-off Test against India, finishing with a match haul of eight for 206 for an average of 25.75. Bagging four wickets in each innings of the Test match, she also had three in each of the two ODIs which followed during the month, her six wickets coming at an average of 12.16 and an economy rate of 3.65.

Sneh Rana (India)
All-rounder Sneh Rana had a memorable Test debut at Bristol, her unbeaten 80 off 154 deliveries helping stave off defeat against England after India were made to follow on. Earlier in the match, she finished with four for 131, accounting for well-set opener Tammy Beaumont and Amy Jones among others. She also took one for 43 in an ODI against the same side.

Shafali Verma (India)
Big-hitting opener Shafali Verma made a stunning debut against England and was named Player of the Match in the Bristol Test. The 17-year-old became the first Indian woman and fourth from any country to score half-centuries in both innings of a debut Test, notching 96 and 63. Her first innings score was the highest by an Indian woman on debut. She also aggregated 59 runs in two ODIs against India at a strike rate of 85.50.