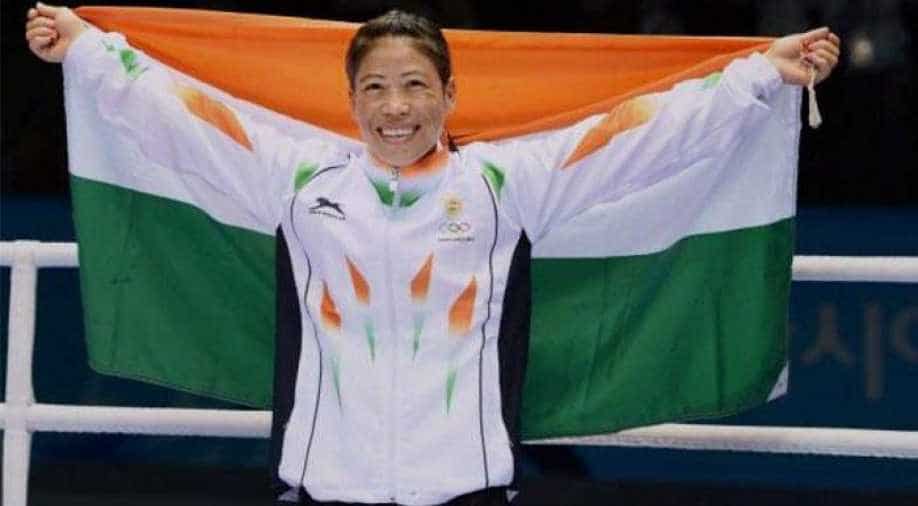 'Magnificent Mary', as she is known in India, was a bronze medallist at the 2012 Olympics in London and won a record sixth gold medal at the World Amateur Boxing Championships last year.

MC Mary Kom has spent close to two decades slugging it out in the ring but even at 36 one of the most decorated women boxers in the amateur game has no intention of quitting before she gets a chance to land the ultimate prize in Tokyo next year.

'Magnificent Mary', as she is known in India, was a bronze medallist at the 2012 Olympics in London and won a record sixth gold medal at the World Amateur Boxing Championships last year.

Her most recent gold came after a gap of eight years and, with the 2020 Olympics on the horizon, the trailblazing mother of three is not done yet.

"I believe the hunger and desire to take on challenges has kept me going," Mary Kom told Reuters in an interview.

"I always like to challenge myself and accomplish them, it keeps me motivated to take on new ones.

"The new challenge for me is to win my first ever Olympic gold medal."

The pint-sized puncher, who has also won gold medals at the Asian Games and Commonwealth Games, won her first world championship silver in 2001 and had targeted the 2016 Rio Games as her swansong.

Failing to qualify for the quadrennial showpiece was a heartbreaking setback given the amount of time and hard work she had put in for training, and she conceded the thought of hanging up her gloves had crossed her mind.

"It has happened at times," said Mary Kom, who last month signed a two-year deal with Puma to be their ambassador for women`s training in India.

"Because family is equally important, but I believe that`s where I have been really lucky as my family has always motivated me to continue boxing and since it is my only passion I have always wanted to achieve more."

As well as her opponents, Mary Kom has also had to fight negative perceptions about women`s boxing in what is still a socially conservative country.

In that regard, she considers herself fortunate to come from the state of Manipur in India`s northeast, where boys and girls are treated more equally.

In some Indian states, gender bias and sex-selective abortion are not uncommon and girls are often viewed as a financial burden because of the dowry given by the bride`s family to the groom - an illegal but prevailing social custom.

Mary Kom was also greeted with scepticism when she started her career in the ring and had to keep it a secret from her parents. It was only when her picture appeared in a local newspaper that she confessed she was a fighter.

But success came quickly and she was a world champion before her marriage. The doubters were back on her case when she returned to the ring after starting her family but Mary Kom has continued to prove them wrong.

The face of the campaign to get women`s boxing into the Olympics in London, Mary Kom`s story ultimately captured the imagination of the country`s film industry and a biopic of her life came out in 2014.

She now has three boys of her own to raise and balancing boxing and motherhood is a daily challenge, and one that is only going to get harder as the Tokyo Olympics approach.

Mary Kom won her latest world title at light flyweight but at the Olympics has to move up to flyweight, the lightest of the five categories in Tokyo.

In the past she has also faced problems in finding the right sparring partner.

"I am focusing on my diet and doing the regular training," said the Muhammad Ali fan. "The weight category will be tough and you have to be really, really focused as there are some good boxers in that category.

"I have a good coach and good support staff who are now capable enough to condition me for the best of opponents and I am going to continue with this."

Boxing`s future as an Olympic sport is shrouded in uncertainty with planning for the Tokyo Olympic tournament on hold due to financial and governance issues in amateur boxing`s governing body AIBA.

But Mary Kom is not going to allow her attention to stray.

"I think as athletes our focus is to play to the best of our potential and not think of anything else," she said. "Hopefully things will be taken care of.

"My job is to continue to train and be in the best version of myself. I should be ready for any condition."