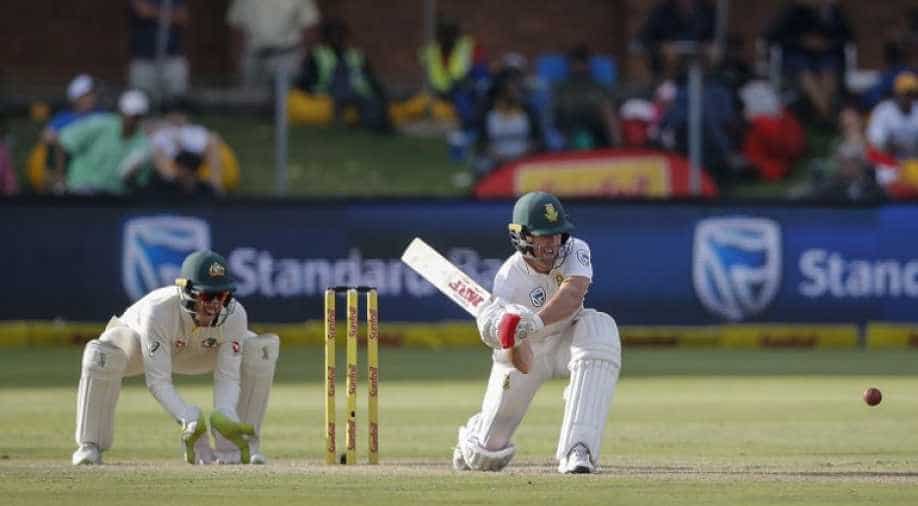 Australia fought back on the second day of the second Test but could not stop AB de Villiers taking South Africa into a slender first innings lead at St George’s Park on Saturday.

South Africa were 263 for seven at the close, a lead of 20 runs after Australia were bowled out for 243 in their first innings.

There was a flurry of wickets after tea but De Villiers counter-attacked to hit 74 not out off 81 balls with easily the most aggressive batting of an otherwise slow day.

"He’s an amazing player," said Australian all-rounder Mitchell Marsh. "He’s done it for so long. We need to find a way to nullify him as quickly as possible. That's going to be a great challenge for us. Hopefully we can find a way to get him out."

It was the second outstanding innings in the series by De Villiers, who made 71 not out in the first innings of the first Test in Durban before being run out for nought in the second innings as South Africa slipped to a 118-run defeat.

De Villiers’ innings was in complete contrast to the struggles of his teammates against superb reverse swing bowling. Dean Elgar made 57 and Hashim Amla scored 56, but they took 197 and 143 balls respectively to do it.

Only one wicket, that of nightwatchman Kagiso Rabada, fell between the start of play and the afternoon tea break. But it was painfully slow going. Only 43 runs were scored in 26 overs between lunch and tea, before a flurry of wickets and De Villiers’ batting enlivened the evening’s play.

"I thought the middle session was as good (an example of) Test cricket as you will see. We weren’t taking wickets but we felt in the game the whole session. South Africa batted extremely well to get through that period when the ball was reverse swinging and then we got our rewards later in the day," added Marsh.

Amla also hailed the quality of the cricket. "Today was a tough day of Test cricket and I think those people who are Test match lovers will appreciate the skill of the bowlers and at times, especially when AB was batting, the skill of the batting," he said.

South Africa’s quest for a series-levelling win was given added impetus by a pending disciplinary hearing which could result in fast bowler Rabada being banned for the remaining two Tests after his shoulder made contact with Australian captain Steve Smith on Friday.

Australia were frustrated for long periods by Elgar Amla, but the tourists were right back in the game when both batsmen were dismissed in the first two overs after tea, followed by two more batsmen being dismissed cheaply.

Amla was bowled by a fast, reverse swinging yorker from Mitchell Starc for 56 four balls after tea and Elgar was caught behind off Josh Hazlewood for 57 in the next over. Like Amla, Elgar fell to a full delivery which swung late.

De Villiers and Quinton de Kock put on 44 for the seventh wicket before De Kock was bowled by off-spinner Nathan Lyon with a ball which spun sharply past the outside edge of his bat.

While other batsmen had struggled to gain any momentum to the South African innings, De Villiers looked at ease and played strokes to all parts of the ground in reaching a half-century off 62 balls with ten fours. By the close he had faced 81 balls and hit 14 boundaries.

Australia delayed taking the second new ball until the 90th over but De Villiers and Vernon Philander survived until the close.