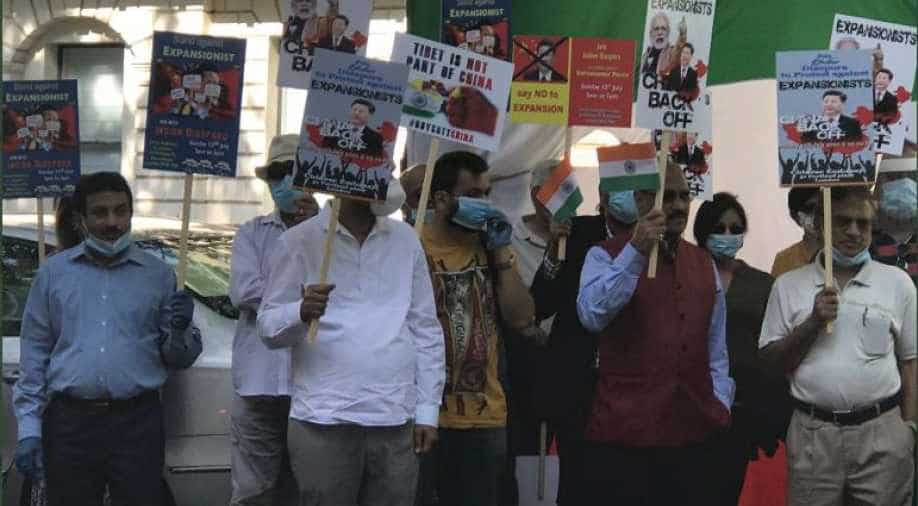 Human rights activists from Pakistan occupied Kashmir (PoK) and Iranian diaspora along with the Indian diaspora protest outside the Chinese embassy in London against their expansionist policy. Photograph:( Twitter )

Arif Aajakia, a Pakistani human rights activist who believes in speaking “bitter and naked truth” about his country, shouted “boycott China” and “down with China”.

On July 12 many Pakistanis joined Indian protesters outside the Chinese embassy in London, in a protest against Chinese expansionism.

People of Indian and Pakistani origin were seen holding ‘anti-China’ placards during the protest that happened after India and China face-off in Ladakh’s Galwan Valley.

Arif Aajakia, a Pakistani human rights activist who believes in speaking “bitter and naked truth” about his country, shouted “boycott China” and “down with China” along with the members of several Indian diaspora groups protesting against China’s expansionist policies.

“Today was also the first time in my life that I sang Vande Mataram,” said Aajakia.

"I have travelled all the way from Glasgow for this protest. I am from PoK, an Indian living under Pakistani occupation. The Chinese are wreaking havoc across Gilgit-Baltistan through CPEC (China-Pakistan Economic Corridor) and the Pakistani government continues to work for hand in glove with them," said Amjad Ayub Mirza, who hails from Mirpur in Pakistan occupied Kashmir (PoK), who has been quite vocal against oppression and injustice meted out to the people of PoK by Pakistani authorities.