Shot in the back: Dangers of being an opposition candidate in Bangladesh 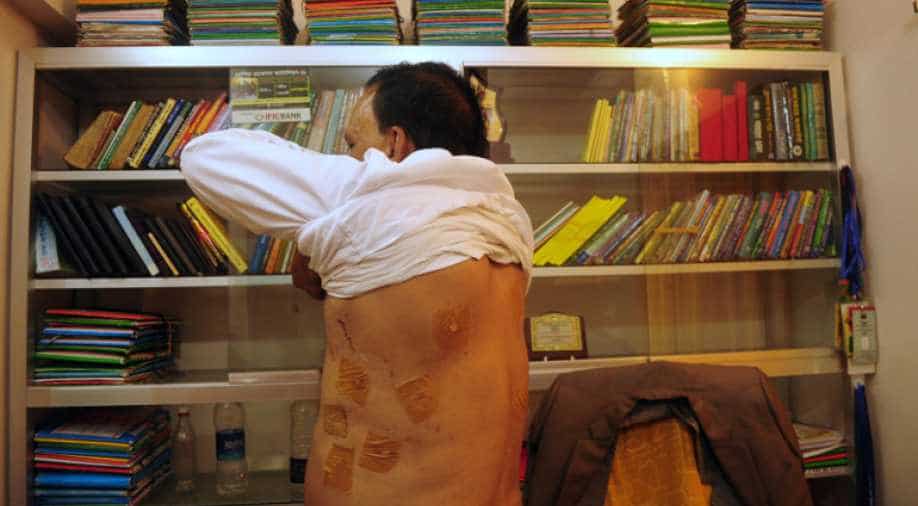 Mahbub Uddin Khokon, a National Unity Front alliance candidate contesting in the 11th general election, shows off wounds from pellets he was hit with while out for campaigning in the district of Noakhali, Bangladesh. Photograph:( Reuters )

Khokon, who is contesting Sunday's parliamentary election as a candidate for the main opposition Bangladesh Nationalist Party (BNP), alleges he was shot on December 15 by a senior police officer in Noakhali.

At a library inside a small district court in southeastern Bangladesh, barrister Mahabub Uddin Khokon stood up to take off his coat and scrunched his white shirt up to his shoulders to reveal a back covered in bandages over several shotgun pellet wounds. Settling back into an office chair, the 62-year-old smiled.

Also read: Ahead of Bangladesh vote, opposition says it faces 'a reign of terror'

"You see, my fight is not against the Awami League. It's not them I am running against," he said, referring to Bangladesh's ruling party. "It's against the police, the Election Commission, and the entire government machinery."

Khokon, who is contesting Sunday's parliamentary election as a candidate for the main opposition Bangladesh Nationalist Party (BNP), alleges he was shot on December 15 by a senior police officer in Noakhali, a mostly-rural district in the country's southeast. At the time he says he was out canvassing for votes along with hundreds of supporters, of whom about 40 were also injured.

"I thought the police was there to protect us," said Khokon, who is also secretary of Bangladesh's Supreme Court Bar Association.

The top election official in the area, who also oversees the police, has dismissed the allegations. Police, the government and the Awami League also deny opposition allegations of intimidation and say the election campaign period has been fair.

While violence during election campaigns is not new in the South Asian nation, the attack on Khokon and his supporters have fed into the opposition accusations.

The town was the scene of bloody violence on December 15.

"The (police) officer-in-charge asked Khokon to leave the place immediately and then abruptly fired pellet bullets at the petitioner (Khokon)," said a lawsuit Khokon has filed at the Dhaka High Court against specific police officers, the government and the election commission.

One pellet hit Khokon's chin, five his back and two his legs, the suit alleges, adding that 40 other opposition activists were also "grievously injured by illegal and unjustified firing of bullets by police" in that attack.

Tanmoy Das, the returning officer in charge of overseeing elections and police in Noakhali, said Khokon had made exaggerated claims and it was not the police but others, perhaps people from Khokon's own party, who shot at him because of internal discord. HM Ibrahim, the Awami League candidate Khokon is running against, echoed those statements.

"Some violence is usual in our politics," Ibrahim said, adding that Khokon's supporters had attacked an Awami League office on the same day and in the same area that Khokon was attacked. "He is a lawyer, he is trying to make a fool of the public. His own party people must have fired at him."

Das said an investigation was underway, and the police officer in charge in Sonaimuri had been "replaced" on orders of the Election Commission "due to pressure." He declined to say who the pressure was from.

"I think the situation is good here. There is a level playing field," Das said, adding that he had received no complaints of Awami League workers threatening or attacking anyone.