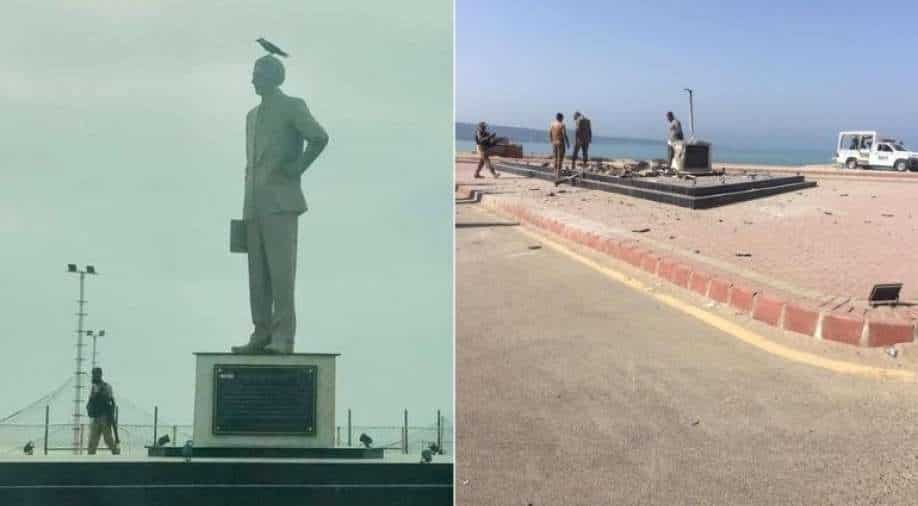 An explosive device placed beneath Jinnah's statue, which was constructed earlier this year, apparently blew it up.

On Sunday morning, a blast in the port city of Gwadar, Balochistan province, completely demolished a statue of Pakistan’s founder Mohammad Ali Jinnah.

The statue, which was unveiled in June this year at Marine Drive, was blown up by placing an explosive device beneath it, according to a report in Pakistan's English newspaper Dawn.

According to reports, the blast was carried out by the Baloch Liberation Front.

The statue, which was placed on Marine Drive in June, is designated a safe zone.The blast entirely demolished the statue.

According to BBC Urdu, Babgar Baloch, a spokesman for the outlawed militant group Baloch Republican Army, claimed responsibility for the bomb on Twitter.

"The demolition of Quaid-e-Azam's statue in #Gwadar is an attack on the ideology of Pakistan. I request authorities to punish the perpetrators in the same way as we did with those behind the attack on Quaid-e-Azam residency in Ziarat," Balochistan’s former home minister and current Senator Sarfraz Bugti tweeted.

The demolition of Quaid-e-Azam's statue in #Gwadar is an attack on Ideology of Pakistan. I request authorities to punish the perpetrators in the same way as we did with those behind the attack on Quaid-e-Azam residency in Ziarat. pic.twitter.com/BQeeZjsHg3

After that, he served as Pakistan's first governor-general until 1948, when he died.

Since 1947, Balochistan, Pakistan's most unstable province on the southwestern border, has demanded political rights, autonomy, and territorial control.

For years, the Pakistan Army has been committing human rights crimes in Balochistan.

Over the years, the area has witnessed unspeakable atrocities, ranging from mass executions to kidnappings, torture, and eventually murder.