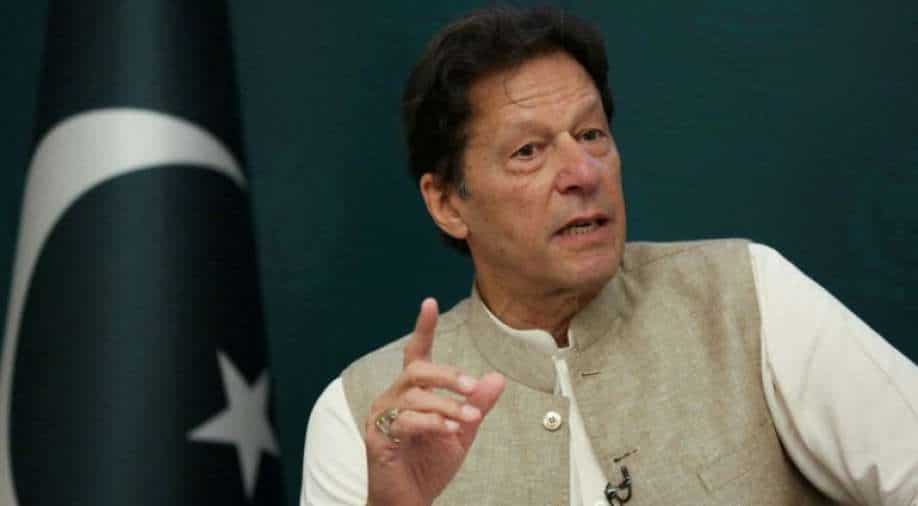 The opposition accuses Khan of mismanaging the economy and foreign policy. He denies this. Photograph:( Reuters )

Imran Khan has been alleging that there was a foreign conspiracy against Pakistan and his government. He has claimed that he has documentary evidence that foreign countries are trying to interfere in Pakistan's affairs

Pakistan Prime Minister Imran Khan on Friday said that Pakistan government had handed official protest to US embassy over what he called USA's interference in the country's internal affairs.

"We now have given a demarche to (the) American embassy," Khan told local television channel ARY in an interview, referring to a diplomatic note over what he described as a foreign conspiracy to oust him from power.

The cricketer-turned-politician is in a tough political situation as his government is due to face a tough no-confidence vote on Sunday (March 3). Khan recently got a major jolt as his coalition partner MQM declared that it would vote with the opposition on the no-confidence motion.

Imran Khan has been alleging that there was a foreign conspiracy against Pakistan and his government. He has claimed that he has documentary evidence that foreign countries are trying to interfere in Pakistan's affairs.

In a televised address to the nation on Thursday (March 31), Imran Khan explicitly named USA but backtracked during the same speech.

But on Friday evening Khan named the United States, in his interview with ARY News TV.

Reuters reported that US embassy did not immediately respond to Imran Khan's assertion on Thursday that an official protest had been handed to US embassy.

Ruling party members in Pakistan led a protest against the United States in the northwestern city of Peshawar on Friday.

In an unusual move, dozens of Pakistan Tehreek-e-Insaf (PTI) ruling party figures, led by a provincial minister, rallied in the centre of Peshawar, chanting "Down with America!"

"We have come out to support Imran Khan who has challenged the capitalist forces," the minister, Taimur Jhagra, told the rally. "We will prefer hunger over a surrender to the U.S.," said another provincial lawmaker in the rally, Fazal Elahi.

A handful of activists from an anti-America Shi'ite group also reacted to Khan's claims, holding a rally in Islamabad where they burned American flags.