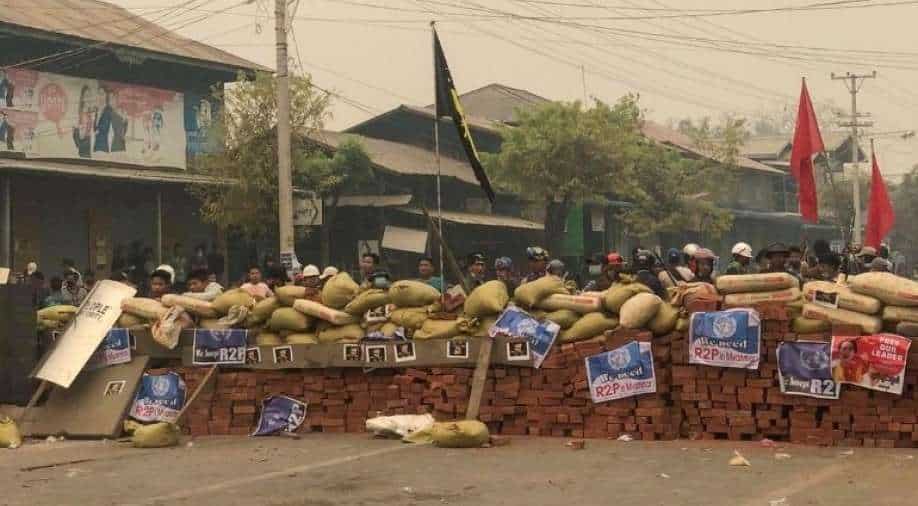 Since the military seized power and ousted an elected government led by Nobel laureate Aung San Suu Kyi on February 1, there have been daily protests and a surge of violence with security forces killing hundreds of civilians

Myanmar`s National Unity Government, set up by opponents of army rule, said on Wednesday it had formed a "people`s defence force" to protect its supporters from military attacks and violence instigated by the junta.

Since the military seized power and ousted an elected government led by Nobel laureate Aung San Suu Kyi on February 1, there have been daily protests and a surge of violence with security forces killing hundreds of civilians.

The National Unity Government said in a statement the new force was a precursor to a Federal Union Army and that it had a responsibility to "make effective reforms in the security sector in order to terminate the 70-year long civil war".

It also said it has a responsibility to deal with "the military attacks and violence from state administration council on the people”.

The unity government, established last month by an array of groups opposed to the junta, has pledged to end violence, restore democracy and build a "federal democratic union".

A spokesman for the junta did not answer a call seeking comment.

Myanmar was ruled by the military for nearly half a century from 1962 before the generals launched a tentative transition to democracy a decade ago.

That process was brought to a halt by the coup, to the anger of many people unwilling to put up with another phase of military rule.

The National Unity Government did not provide details of how the new force would be organised or armed, or how it would try to achieve its objectives. A spokesman for the unity government was not immediately available for comment.

Myanmar`s well-equipped army is one of the region`s most battle-hardened forces.

But despite that, opponents of the coup have in some places been using crude weapons to fight troops while others have sought training with ethnic minority insurgents who have been battling the military since independence in 1948 from remote border areas.

Myanmar has in recent weeks seen an increasing number of small blasts in cities and towns, some targeting government offices and military facilities.

There have been no claims of responsibility but the military has blamed people bent on destabilising the country.

Five people killed in an explosion this week, including a former member of parliament for Suu Kyi`s party, had been building a bomb, the state controlled Global New Light of Myanmar newspaper reported.

The newspaper said security forces had searched the scene of the Monday afternoon blast in the central Bago area and found wire, batteries and a damaged phone and phone parts.

The newspaper said the explosion of the "home-made mine" killed four men on the spot including a member of Suu Kyi`s National League for Democracy (NLD) while another man died of his injuries in hospital.

A spokesman for the NLD was not available for comment. Suu Kyi, 75, has been detained since the coup along with many members of her party.

The junta said it had to seize power because its complaints of fraud in a November election won by Suu Kyi`s party were not addressed by an election commission that deemed the vote fair.

The junta disputes the AAPP figure and has banned the group. It acknowledged 248 deaths in mid-April and in addition says 24 police and soldiers have been killed in the protests.

Reuters is unable to verify casualties because of curbs placed on media by the junta. Many journalists areamong the thousands of people who have been detained.

The independent Tachileik news agency based in Shan State in the northeast said on Facebook its licence had been revoked, the latest of eight such news outlets to be shut under orders of the authorities.

With mobile internet access largely cut off in a bid to quell the anti-junta protests, Myanmar has increasingly appeared headed back to a state of isolation that preceded a decade of democratic reforms.