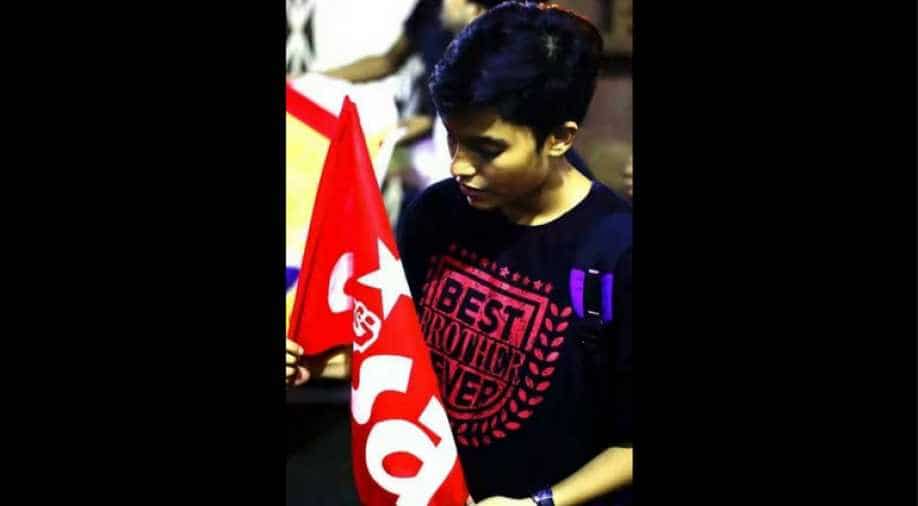 Asmita Sarkar discovered her lesbian tendencies at a young age and had no one to guide her in accepting her natural instincts. Rather, she was discouraged and subjected to humiliation. Photograph:( WION )

She was once ridiculed as "a boy-like-girl" in her school. As a child, she was alienated and isolated by a homophobic society in a small village in India's eastern state of Bengal. Her teachers and friends made fun of her short hair, attire and sexuality. Her parents refused to stand by her side as they discovered her sexuality. But all these didn’t stop her.

19-year-old Asmita Sarkar broke all stereotypes to fight the student body elections in Kolkata’s reputed Jadavpur University. She took the bold step to pitch herself as a lesbian contender in the university polls. She has become the face of the community in the university. As you enter the Arts Department unit in the university, you will find Asmita campaigning not just for herself but trying to sensitise other students about the co-existence of their LGBT counterparts. Asmita is fighting the AFSU (Arts Faculty Students Union) elections of Jadavpur University, scheduled to be held on January 25.

Her timid appearance is not to be mistaken with a young and enthusiastic student leader, brimming with confidence. In an interview with WION, Asmita shared her struggle to establish her sexuality in a country, where homosexuality is no less than a crime. She discovered her lesbian tendencies at a young age and had no one to guide her in accepting her natural instincts. Rather, she was discouraged and often openly humiliated.

“I hail from a small town. There no one knew about my sexuality till I was 12-years-old. But, as they came to know about my gender choice, everyone in my family and school insulted me. I was never welcomed at family gatherings. I was treated as an untouchable. When my family came to know about my sexuality, I was left alone. I had to cook my own food. They were worried about the fact that what anyone would think about me,” said Asmita.

In India, homosexuality and queer identities continue to be a taboo subject. It may be acceptable to more Indian youths than before, but the LGBT community is still struggling with their sexuality and gender choices. The problem is deep-rooted in the rural areas. Families in rural India conduct secret honour killings of gay men or subject lesbians to family-sanctioned corrective rapes to oppress the community as a whole.

“There is no place for the LGBT community or the transgender in Indian society. We don’t belong to this planet, for the commoners. The problem starts within the family itself. Parents fail to support their LGBT children. Then, comes the draconian laws like section 377, which makes life all the more difficult for the community,” said Manobi Banerjee, India’s first transgender College Principal.

The university polls are a platform for Asmita, where she is trying to stand up for her community. “If I win, I will try and create a cell for transgender and LGBT community members on the university campus. We demand recognition for our community in various college application forms. The fight has just begun,” added Sarkar, as she walked towards the canteen for a quick breather from the campaign.

According to an Indian Home Ministry data of 2014, a total of 778 cases were registered under section 377 of the Indian Penal Code. This law has made life difficult for the LGBT community in the country. This law makes “carnal intercourse against the order of nature” a crime. However, it fails to distinguish between consensual sex and rape. Thus, it acts as a hindrance to the sexual freedom of the LGBT community.