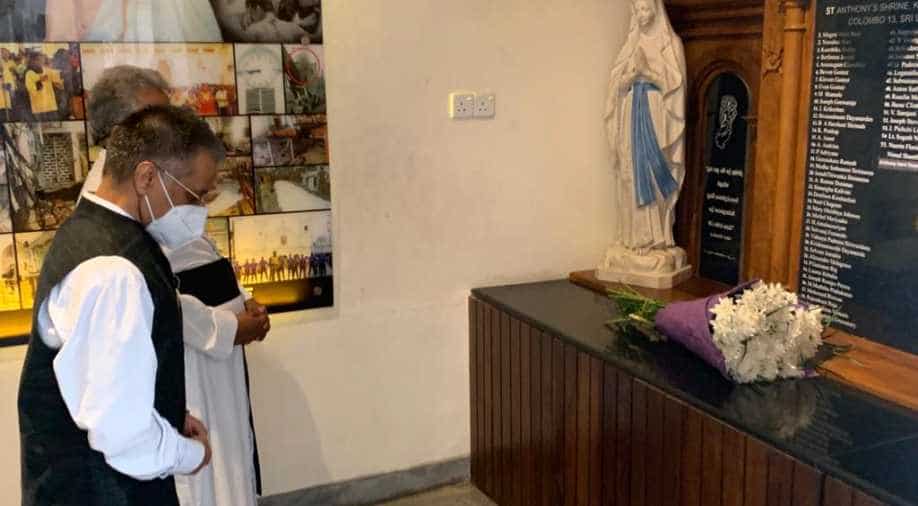 St Anthony's church in Kochchikade, Colombo saw more than 90 people die due to the attack.

In his first official engagement outside the Indian mission, the new Indian high commissioner to Sri Lanka Gopal Baglay on Saturday visited the St Anthony's church, which among several places were the target of the Easter Sunday terror attack that killed more than 260 people.

St Anthony's church in Kochchikade, Colombo saw more than 90 people die due to the attack.

In a statement, the Indian mission in Colombo said, "High Commissioner prayed for peace, safety and security of the two countries"

The administrator of the Church Rev. Father Jude Raj, "blessed the people of the two countries with health and happiness...blessed the High Commissioner in his task to foster ever closer friendship between the two neighbouring countries", the statement said.

Last year Indian Prime Minister Modi made Church the first stop of his Sri Lanka visit and paid homage to the victims of the terror attack. In 2019 PM Modi, in his first visit abroad after taking charge in the 2nd term, visited the Maldives and Sri Lanka

The high commissioner also visited Gangaramaya Temple in Colombo and was welcomed by Venerable Dr Kirinde Assaji Thero. PM Modi had visited the temple during the International Vesak Day Celebrations in 2017.

Meanwhile, PM Modi spoke to Sri Lankan President Gotabaya Rajapaksa on the current COVID crisis and assured New Delhi's "all possible support" to Sri Lanka for mitigating the effects of the pandemic.

The readout of the conversation released by Prime Minister's office said, "Prime Minister Shri Narendra Modi spoke on phone today with H.E. Gotabaya Rajapaksa, President of Sri Lanka, regarding the ongoing COVID-19 pandemic and its likely health and economic impacts in the region. "