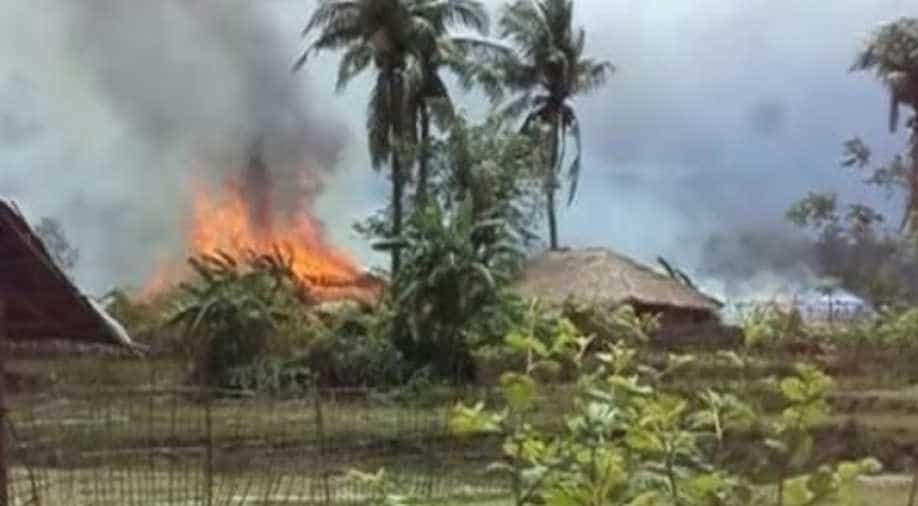 The unrest comes days after Myanmar's civilian leader Aung San Suu Kyi declared troops had ceased 'clearance operations' in the border area that have forced more than 430,000 Rohingya refugees to flee for Bangladesh in under a month.

Myanmar's army chief on Saturday blamed Rohingya militants for an explosion outside a mosque in Rakhine state, as a rights group accused the military of starting fires in the region to prevent refugees from returning.

The unrest comes days after Myanmar's civilian leader Aung San Suu Kyi declared troops had ceased "clearance operations" in the border area that have forced more than 430,000 Rohingya refugees to flee for Bangladesh in under a month.

The army claims it is targeting Rohingya militants who attacked police posts on August 25. But its operation has been so sweeping and brutal that the UN says it likely amounts to "ethnic cleansing" of the Rohingya Muslim minority, a group reviled by many in the mainly Buddhist country.

On Saturday Myanmar's commander-in-chief, Min Aung Hlaing posted a statement on Facebook saying Rohingya militants planted a "home-made mine" that exploded in between a mosque and madrasa in northern Rakhine's Buthidaung township on Friday.

The army chief accused the militants of trying to drive out around 700 villagers who have remained in Mi Chaung Zay an argument analysts have said makes little sense for a group whose power depends on the networks it has built across Rohingya communities.

"As our villagers did not want to leave their homes, the terrorists blew up the bomb during the prayer time as a way of terrorizing the villagers," the army chief's statement said.

"It is the act of ARSA terrorist group," it added, using an acronym for the Rohingya militant group whose raids on police posts in August triggered the military backlash.

No one was reported injured in the explosion.

With the government blocking access to the conflict zone, it is difficult to verify the swirl of claims and counterclaims over who is driving the unrest, which has also displaced tens of thousands of Buddhists and Hindus.

But rights groups say there is overwhelming evidence that the army is using its crackdown on militants to systematically purge the 1.1-million strong stateless Rohingya from its borders.

On Friday Amnesty International said new videos and satellite imagery confirmed fires were still ripping through Rohingya villages, scores of which have already been burned to the ground.

"Not satisfied with simply forcing Rohingya from their homes, authorities seem intent on ensuring they have no homes to return to," said Tirana Hasan from Amnesty.

According to government figures, nearly 40 percent of Rohingya villages in northern Rakhine have been completely abandoned over the past month.

Many of those who stayed behind are now living in isolated Muslim communities, gripped by fear and cut off from crucial aid, according to the UN's humanitarian coordination office, UNOCHA.

"Following continuous threats from local Rakhine people to leave, many of these vulnerable people are so terrified that they are calling the Government, the UN and others asking for additional measures to protect them," UNOCHA said in its latest update.

Human Rights Watch on Saturday also echoed allegations from Bangladeshi officials that Myanmar security forces were laying landmines along the border, where hundreds of thousands of Rohingya have crossed in the largest mass refugee movement in recent decades.

"The Burmese military needs to stop using these banned weapons, which kill and maim without distinction."