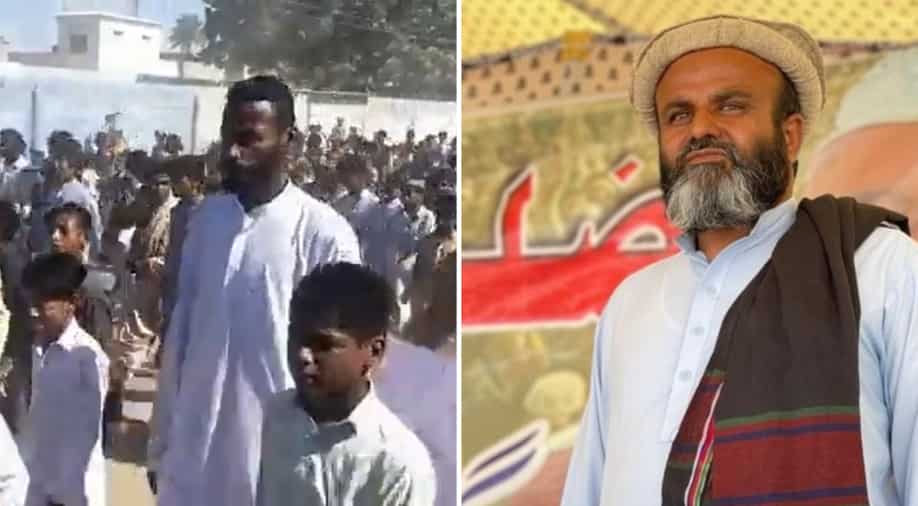 Talking to WION exclusively, Maulana Hidayat-ur-Rehman, head of the ‘Give rights to Gwadars’ rally, said that they have been agitating for over a week, seeking justice and jobs for their people. He accused the Pakistan government of being hand-in-glove with the Chinese trawlers who are threatening their livelihood by illegally fishing in the southwestern Makran coast

Thousands of people have been staging a massive protest in Pakistan’s port city of Gwadar against the government for unnecessary check posts, acute shortage of water and electricity and threats to livelihood from illegal fishing.

The protests are part of growing discontent with China's presence in Gwadar, whose port is an integral part of the USD 60 billion China-Pakistan Economic Corridor project (CPEC), the flagship project of China's multi-billion-dollar Belt and Road Initiative (BRI).

The sit-in protest is being organised by workers of some political parties, civil rights activists, fishermen and concerned citizens, who have been going on for a week at Y Chowk on Port Road in Gwadar, a coastal town in the restive Southwest Balochistan province.

The protest is spearheaded by Maulana Hidayat-ur-Rehman, head of the ‘Give rights to Gwadar' rally.

The protesters have been demanding the removal of unnecessary security check posts, availability of drinking water and electricity, eviction of  Chinese trawlers from Makran coast and opening of the border with Iran from Panjgur to Gwadar, Pakistan based Jang newspaper reported.

Talking to WION exclusively over the phone, Rehman said that they have been agitating to seek justice and jobs for their people. He accused the Pakistan government of being hand-in-glove with the Chinese trawlers who are threatening their livelihood by illegally fishing in the southwestern Makran coast.

“Today (Monday) is our 8th day, we have been here since November 15 morning. Our demand is that we want jobs, this is our sea. Big trawlers have taken over our fishing area and are depriving the local fishermen of livelihood. The provincial and federal governments are backing these elements. Similarly, on the borders (near Iran), thousands of Baloch families are facing restrictions and are unable to do business. There are thousands of security check posts which are creating a hindrance,” Rehman said.

He threatened to stop the CPEC work if the government failed to listen to them and meet their demands.

“We, by the grace of God, will continue with our protest until all of our demands are met. We have people with us, thousands more are joining. If the government continues to ignore us, we will block the entire highway from Uthal zero point till Jiwani, and also block the entire Makran Coastal highway, and eventually expand our protest across Balochistan. We will also stage a protest in front of the Gwadar port and even stop the CPEC work in the coming days,” Rehman said.

On Thursday, a delegation sent by the Chief Minister of Balochistan returned empty-handed as the protesters refused to end their protest. Meanwhile, Pakistan Radio said that the Senate Standing Committee on Maritime Affairs will hold a meeting in Gwadar on Tuesday to deliberate upon different development projects in the port city.

China's presence in Balochistan has often triggered social unrest and gave rise to anti-Chinese sentiment. It has also given a fillip to Baloch militant insurgent groups, who have carried out terrorist attacks in protest at CPEC projects.

In August this year, a suicide bomber attacked a motorcade carrying Chinese personnel on the Gwadar East Bay Expressway project in which one Chinese was injured and two local children were killed.

In October last year, gunmen killed at least 14 people near Ormara on the coastal highway after ambushing a convoy of vehicles travelling from Gwadar to Karachi and in 2019 five people, including a Pakistani Navy soldier, were killed in an attack on the luxury Pearl Continental hotel in Gwadar.

Gwadar port has long been portrayed as the jewel in the CPEC crown, but in the process, the city has become the very embodiment of a security state.

The authorities' priorities are geared towards securing the port and its ancillary interests; the welfare of those for whom the area is home counts for little. Far from the port being a harbinger of an economic boom, the opposite has happened, The Dawn newspaper reported on Friday.

Existing privations have deepened, people's mobility is restricted by security forces and there is unwarranted questioning of their activities. Many say they are made to feel like strangers in their own land, it said.