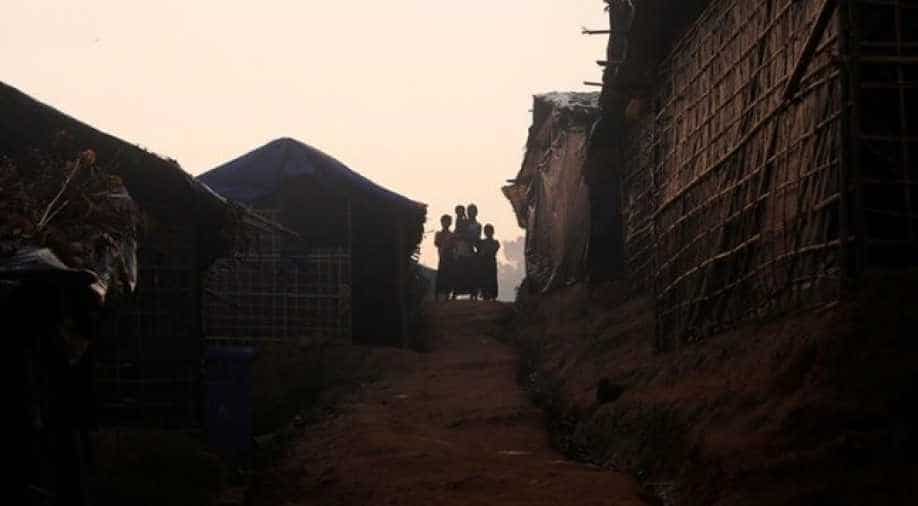 Sitting in his hillside grocery shop in a Bangladesh refugee camp, Rohingya Muslim Momtaz-ul-Hoque takes a break to listen to an audio recording on his mobile phone, while children and passers-by gather round to hear the latest news from Myanmar.

"I listen because I get some information on my motherland," said Hoque, 30, as he plays a message on WhatsApp explaining the Myanmar government's proposals for repatriating refugees.

Hoque has been in Bangladesh since an earlier bout of violence in Myanmar's Rakhine state in 1992, but the number of refugees in the camps has swelled dramatically to more than 800,000 in recent weeks, after a massive Myanmar military operation sent around 600,000 people fleeing across the border.

Tens of thousands of exhausted refugees have arrived with little more than a sack of rice, a few pots and pans and a mobile phone powered by a cheap solar battery, and many are desperate for news of what is going on back home.

With few news sources in their own language and low levels of literacy, audio and video messages distributed on apps such as WhatsApp, Facebook and YouTube have become a community radio of sorts for the Muslim minority.

Dozens of WhatsApp groups have sprung up to fill the information gap. Their offerings range from grainy footage of violence, to listings of the names and numbers of people missing in the chaos of the exodus, or even an explainer from educated Rohingya on how to adjust to life in the camps.

At a shop selling cold drinks in the Leda refugee camp, two men played "WhatsApp news" through a loudspeaker.

Out of breath, a man narrated a scene purportedly from a village in Myanmar's Buthidaung region, according to Mohammed Zubair, a refugee who translated the broadcasts for Reuters.

"They are surrounding the village. We are under attack from the military and the mogs...some people are seriously injured," Zubair translates the speaker as saying, using a derogatory term common in Bangladesh to refer to ethnic Rakhine Buddhists.

"I trust it 100 percent," Zubair said of the information.

The WhatsApp groups tend to have hundreds of members, meaning that the spread of information depends on people passing on the news.

Many of the listeners do not know who is sending the message or the trustworthiness of the broadcaster. Some said outdated or inaccurate reports were common.

"In some cases, we got audio messages of villages burning in Myanmar, and when we contact people in those villages, there's nothing," said one refugee inside a tea shop in Bangladesh's Kutupalong camp.

Other refugees said videos of violence claimed to have been filmed in villages in Myanmar turned out to be footage from other countries.

Many also worry that the unregulated nature of WhatsApp groups increases opportunities for voices keen to push an agenda rather than share facts.

Rohingya rebel group the Arakan Rohingya Salvation Army (ARSA) - whose Aug. 25 attacks on security forces triggered the latest crisis - and its followers have been among the most active adopters of WhatsApp to spread their message.

Several refugees in Bangladesh said they had no idea if the messages, often posted by people with phone numbers registered in the Middle East or other parts of Asia, were actually from ARSA members.

Refugees also worry that Bangladeshi security forces want to monitor the broadcasts, and are looking in the camps for ARSA supporters.

At the tea shop in Kutupalong camp, refugees have stopped listening to the broadcasts on loudspeakers during daylight hours, preferring to gather clandestinely at night instead.

Still, many Rohingyas say social media platforms play a crucial role in keeping spirits up among the community.