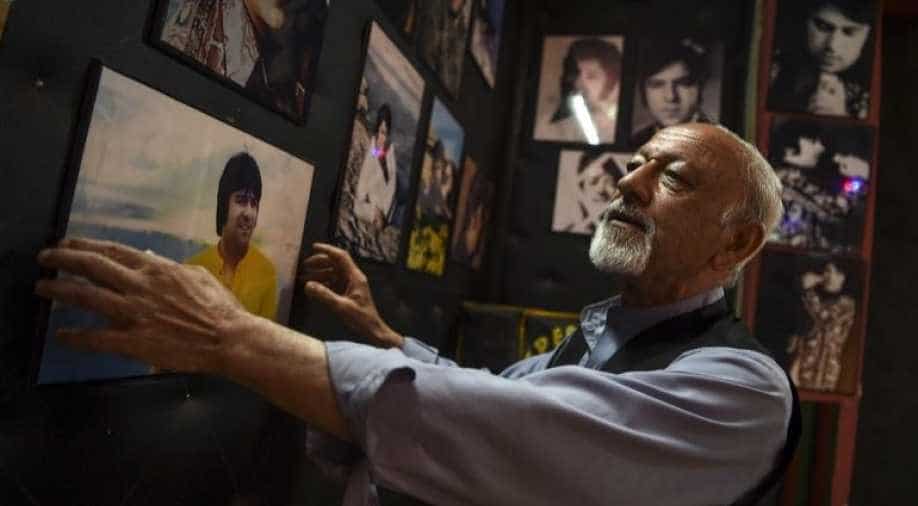 Poet Safiullah Sobat looks on as he hangs a picture of Ahmad Zahir, known as Afghanistan's Elvis Presley. Photograph:( AFP )

Zahir -- the son of a former prime minister with a penchant for brandy and his red Mercedes -- rose to fame in an era when the capital hummed with Western tourists and women strolled through the streets in high heels.

Sporting a black quiff and sideburns, Ahmad Zahir sang of love and heartbreak in liberal 1970s Kabul -- a city now plagued by war and suffering, but where the popularity of Afghanistan's "Elvis" remains undimmed 40 years after his death.

Zahir -- the son of a former prime minister with a penchant for brandy and his red Mercedes -- rose to fame in an era when the capital hummed with Western tourists and women strolled through the streets in high heels.

"Everybody loved him," 73-year-old Safiullah Sobat, a long-time friend of Zahir, told AFP.

"At nighttime girls would come outside his house and honk the horn of their cars."

But on the day of his 33rd birthday in 1979, Zahir was found dead in his car in mysterious circumstances. His death -- much like his life -- has become part of folklore.

In Afghanistan today, where space for music and dance has shrunk under the shadow of war, music channels still play his songs daily and fans -- even those born decades after his death -- continue to snap up his albums and join Facebook groups created in his honour.

"His songs will touch your heart no matter what mood you are in, happy or sad," says Hashmat, who goes by one name and is the manager of "Ahmad Zahir's Cottage", a colourful restaurant in downtown Kabul.

The 26-year-old welcomes his customers -- mostly young couples -- with tea, a hookah pipe and most importantly, their hero's songs.

Zahir -- an ethnic Pashtun -- played concerts in various locations across the country and had fans among all ethnic groups in Afghanistan, which is far more polarised now than at the height of his fame.

Wherever you go in Afghanistan, he said, "if there is music, there'll definitely be one Ahmad Zahir song playing".

He endures because when "you listen to his songs ... you think they are for you, at any time, at any place.

"The wars, the changes in society and a different generation, nothing has affected the quality of his songs," he said.

The 1960s and 70s are remembered as a golden age of music for Afghanistan, when young musicians were mostly influenced by Indian classics and would flock to "Radio Kabul" -- the only radio broadcaster at the time -- to record hits at their studio.

Zahir's best-known works were inspired by Persian poets like Rumi and Hafiz, and he sang mostly in Dari or Afghan Persian.

But he did not shy away from covering Western greats such as France's Enrico Macias and, of course, Elvis Presley.

"At a time when singers shaking their bodies or dancing on stage was seen as awkward, he appeared on stage and screen doing exactly that," said Zahir's friend Sobat, who also runs "Ahmad Zahir's Art and Culture Centre" in Kabul.

"He was talking about Elvis a lot and when you look at his hairstyle, his clothes, the way he moved his body in concerts, you realise he was inspired by Elvis."

Over the decades since his death, conflicting accounts have surfaced about whether Zahir -- who recorded more than 20 albums in his short life -- was killed or died in a car accident.

The official line was that he was killed in a crash near the Salang Pass, north of Kabul.

But many maintain the communist regime assassinated him after his songs became increasingly critical, or because of rumours he had a secret affair with the daughter of the then prime minister.

Sobat believes he was murdered.

"When I saw his body in the coffin, there was hole in his forehead with signs of burns. He was shot at close range," he said.

Years of war have followed and under the Taliban, who banned music, his grave in Kabul was desecrated.

But it has been rebuilt and since then, every June 14, his birthday, pilgrims have flocked to Shohada-E-Salehin Cemetery on the southern edge of Kabul to lay flowers on his grave and play one of his last memorable songs.

"My death shall arrive one day/ In a spring bright with waves of light/ Oh, perhaps my lovers at midnight /lay wreaths on my sorrow(ful) grave," the lyrics read.