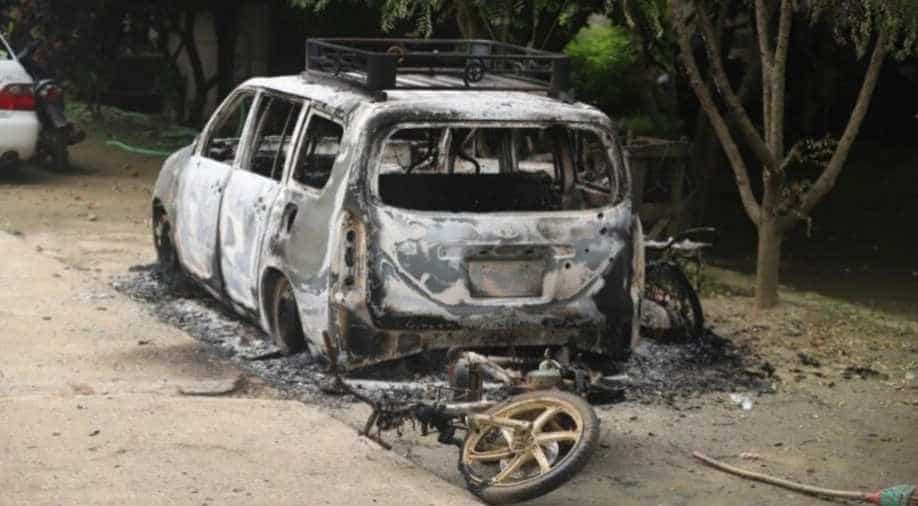 Ethnic armed rebel groups have for decades fought against the military -- and often between themselves -- for land and resources in Myanmar's east.

At least 14 people have been killed in ongoing fighting Thursday between Myanmar's military and rebels who mounted a series of attacks, including an unprecedented strike on an army academy, apparently in retaliation for massive drug seizures.

Ethnic armed rebel groups have for decades fought against the military -- and often between themselves -- for land and resources in Myanmar's east.

An AFP reporter at a police post, the site of one of the attacks, counted the bodies of seven soldiers and four policemen.

This brings the death toll to at least 14.

One of the five attacks targeted the town's Defence Service Technology Academy, where military engineers are trained, the first-ever time the training centre has been hit.

The military said rebels had fired 107mm rockets at the academy from a nearby hillside. Images from local media showing burned-out cars and damaged buildings showered in debris.

The Taaung National Liberation Army (TNLA) claimed the attacks, saying they had acted in retaliation.

"The military launched offensives in our area so we are fighting to defend ourselves," TNLA spokesman Major Mai Aik Kyaw said.

He also confirmed the attacks were coordinated with the Myanmar National Democratic Alliance Army (MNDAA) and Arakan Army (AA).

The AA is currently fighting the military, or Tatmadaw, in conflict-scarred western Rakhine state, but is in a tight alliance with the other rebel groups.

"We assume they carried out the attacks because the Tatmadaw seized tonnes of drugs a few weeks ago," military spokesman Zaw Min Tun said.

In July, narcotics police were met with heavy artillery fire when they launched a major drugs crackdown in Kutkai township in neighbouring Shan state.

Huge stockpiles of chemicals as well as millions of dollars worth of ice, the highly addictive crystalised form of meth, were seized in a single raid.

The "Golden Triangle" -- a lawless wedge of land intersecting China, Myanmar, Thailand, and Laos -- has long served as a base for opium and heroin production.

A unilateral ceasefire in Shan state declared by the military in December is officially due to finish in two weeks, even though clashes with armed groups have continued.