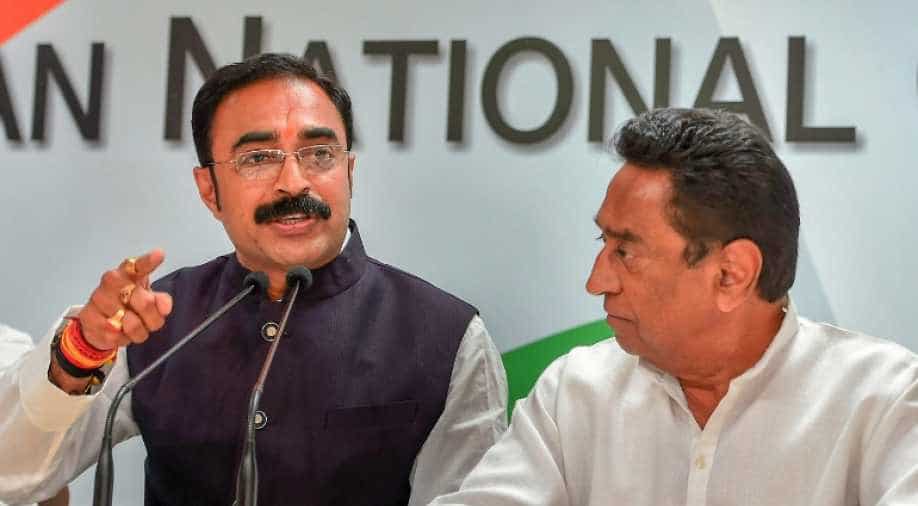 Sapaks Party is projecting itself as a third force in MP's electoral politics. Its claim notwithstanding, the Samajwadi Party, and Bahujan Samaj Party are also in the fray.

During his maiden visit to the state Congress headquarters in his new avatar on Sunday, Masani had heaped praises on Madhya Pradesh Congress unit President Kamal Nath and said that Chouhan's 13-year rule is coming to an end.

With barely two days left for the filing of nominations, BJP was struggling with the ticket distribution exercise. Till Thursday morning, the ruling party was still to announce it's nominees for 38 of the total 230 constituencies in Madhya Pradesh.

The state BJP unit has been rocked by a fierce battle for tickets. The prestigious Govindpura constituency in the state capital, which has been represented by former chief minister Babulal Gaur for a record ten terms, is under sharp focus this time. Initially, Gaur was not ready to digest the party's idea of dropping him but with some advice from the 'right quarters', he has agreed to settle for the status of a star campaigner in this election. Gaur's daughter-in-law and former Bhopal Mayor Krishna Gaur also has been pitching for this seat but she has encountered roadblocks as the grassroot party workers began demanding their piece of the cake.

Even the main opposition Congress party has been coping with endless pulls and pressures on the ticket distribution front. The rivalry among the top state Congress leaders had spilled into the open the other day when party seniors Digvijaya Singh and Jyotiraditya Scindia were engaged in a heated argument over the choice of candidates.

Till now the Congress has declared 212 of the 230 candidates in Madhya Pradesh. On Thursday, the penultimate day for filing nomination papers, the Congress party is expected to clear the names for the remaining constituencies.

In the final run-up for elections, what came as a shot in the arm for the newly floated Sapaks Party, was the letter from the Election Commission announcing it's registration on 6 November. Only two days before this, without registration and election symbol, this party had entered into an alliance with another lesser known outfit - Sampurn Samaj Party. This alliance lasted only for a day and even before the EC issued its order, Sapaks Party released its first list of candidates and declared that they would be contesting on a common symbol. Eyebrows are being raised in knowledgeable circles and it is being asked whether or not Sapaks Party had been tipped by some EC insider to walk out of the alliance as its registration had been okayed.

Sapaks Party has been formed by a group of retired officers, mainly led by promotee IAS officers. This party is entering the election on the anti-reservation and the Atrocities Act issue with the tacit support of state government employees, who are also working under the banner of SAPAK to oppose the government provision for reservation in promotion for SCs and STs.

Sapaks Party is projecting itself as a third force in MP's electoral politics. Its claim notwithstanding, the Samajwadi Party, and Bahujan Samaj Party are also in the fray.

Then there are many other untested parties - all shouting from rooftops against reservation and the Atrocities Act. The Sarv Samaj Kalyan Party that has the blessings of renowned kathavachak Devkinandan Thakur completes the full circle. These parties will make the elections in the state rather interesting.

The million dollar question is: Will this election go on caste lines and once more underscore the primacy of vote bank politics or whether the anti-reservation plank would be driving the voters in hordes.