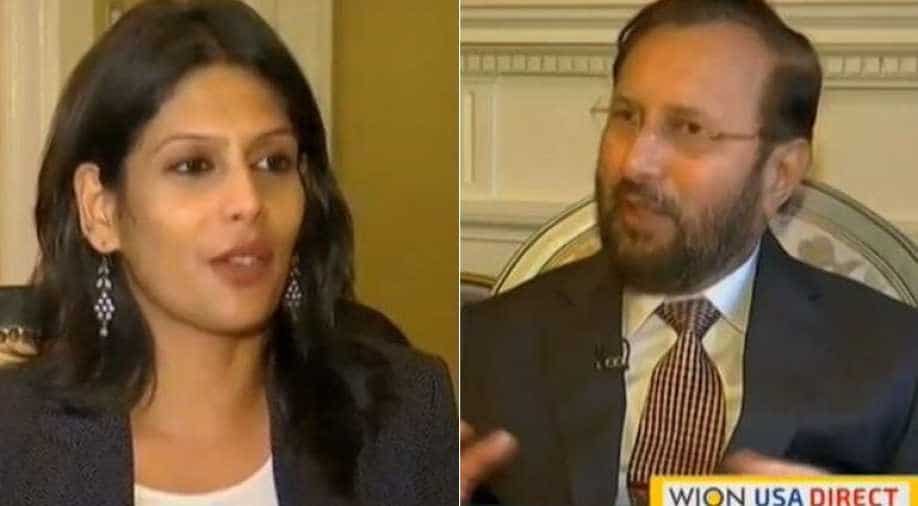 'Ever since the US pulled out of the Paris accord, today was the first time when Trump dropped in a UN meeting on climate and that too to listen to PM Modi,' Javadekar said.

On the sidelines of the UN Climate Summit, Minister of Environment, Forest and Climate Change Prakash Javadekar spoke to WION's Palki Sharma Upadhyay in an exclusive conversation. Javadekar spoke on a range of issues and stated that India has emerged as a global leader on climate change.

Here's the full transcript of the interview.

Javadekar: I think absolutely yes, it has been a stunning performance by India and what a change. Five years ago, we were considered as the backbenchers now we are leading from the front with our actions. India has done remarkably in solar energy program, renewable energy program, the water program, the sanitation program, the clean air program, the clean fuel program, bio-fuel, and many others. Our forest covers, tree covers have increased, in-forest and outside forest also to an extent of 15,000 sq kilometres. So, it's all under Modi ji's dynamic leadership that all these actions are happening in India and we can proudly put before the world.

WION: PM Modi had said that the time for talking is over and it is the time for the action, that India has come up with a roadmap.

Javadekar: The roadmap is what he laid out today. As far as renewable energy is concerned, as far as bio-fuel is concerned, then making fuel also taking it to the next level and at the same time investing more money, the increase in forest cover, the water mission, the sanitation program, single-use plastic ban call. The prime minister has not called for a ban, he has appealed to the common people to stop using single-use plastic.

That's what the program is about, collecting the uncollected plastic waste, uncollected plastic waste is a problem and that will be addressed through this public movement. We issued a notification in 2016 on plastic waste management, which also has elements on extended producers responsibility and many other factors, so now we have given some time to corporations and municipal bodies and will now be implementing it more strictly after the October 2 program launch by the prime minister.

WION: On single-use plastic ban, the prime minister said the move does not succeed unless you provide a viable alternative, your thoughts?

Javadekar: The prime minister never talked about banning. To stop using single-use plastic is a public movement, it is a voluntary action. The problem is uncollected plastic waste below 50 microns, the thin bags are a major problem. Because for grocery shops or for buying vegetables also, people use those thin plastic bags. PM Modi says to use a cloth bag instead, it was being used earlier too.

The bottles that get recycled are not a problem. The prime minister wants to change the habit of extra dependence on plastic. Let there be a public movement, let there be regulations to follow and then we can achieve the target of clean India also by addressing the last mile of waste management.

WION: PM Modi also mentioned a global behavioural change. Do you believe that any of these roadmaps with leading economies of the world like us would not follow the actions? Like the US pulling out of the Paris accord and that has dealt a blow to global climate action.

Javadekar: I don't know the records actually but ever since the US pulled out of the Paris accord, today was the first time when US President Donald Trump dropped in a UN meeting on climate and that too to listen to PM Modi.

WION: Does that denote a change of heart?

Javadekar: I don't know, but lets always be hopeful that things will change for the better.

WION: Another point that was raised today was a disaster-resilient infrastructure. At a time when the global economy is under pressure if you talk about meeting emission norms, if you talk about pushing global climate action, it puts immense pressure on emerging economies like India. How do we balance with that?

Javadekar: That is the real issue, therefore the role of finance and technology transfer, seamless technology transfer becomes more important. Because you should not profit from possible disaster or a certain disaster of climate change. So, technologies we can reduce emissions must be available to the world at an affordable cost. That's the point which we are raising. The last two days we were in a meeting for industrial transitions and low carbon path. That's very important.

We need innovations and technologies to be cheaper, technologies to be affordable so that it is a win-win situation where you reduce the emissions and can still manage it effectively without increasing the price and without becoming uncompetitive in the markets.

WION: The prime minister also linked it to the Indian tradition and called it a people's movement. Movements and policies succeed when there is a political push and political will. In recent general elections in India, talks of climate change were in the manifesto but it was not in front of any political parties' manifesto or agenda. Do you think the PM wants climate change as the central point for the political agenda as well?

Javadekar: He is not setting the political agenda, what he is doing is taking India's legacy forward. We have a very good term in our tradition which is 'charachar srishti' which means flora and fauna becomes a family, that is what India's ethos is all about. We care about the environment, our theme is that the environment will give you enough but your greed cannot be fulfilled because we have limited resources - that is the message of the Indian culture. You know that the Bishnoi tribes in Rajasthan sacrificed their lives so that the trees could not be cut, that's a huge thing.

WION: We know that Delhi, during Diwali, will become a gas chamber. Is the government going to do anything about it?

Javadekar: We have already done 5 major things, therefore the good days - as far as clean air is considered - have increased and the number of bad air days has reduced. Point 2.5 and point 10 mg of dust particles have also reduced in the last 5 years because of our concentrated actions. Eastern peripheral expressway was completed by this government and therefore around 60,000 vehicles which use to pass through Delhi are now not coming to Delhi, which used to add great pollution to that extent.

We have already closed the Badarpur power plant and Rajghat power plant. We have already switched to BS-Vi fuel. Vehicles from April 1 will be BS-Vi compliant. Thousands of three-wheeler vehicles are already e-rikshaws. All this has had an impact on air pollution.

Even in stubble burning, there is a reduction of 30 per cent because the central government has invested, state governments have invested, we are offering incentives so that they don't burn and use that for many other uses. So everything is going as per the plan.

In November, yes, there is always a problem because we have windless and rainless winters. These are two naturals things which worsen the air quality, but we have at least accepted that there is a problem, we started AQI, the prime minister launched and we also established hundreds of air quality monitoring stations. We are doing localised experiments also. Everything is resulting favourably as far as Delhi's air pollution is concerned.