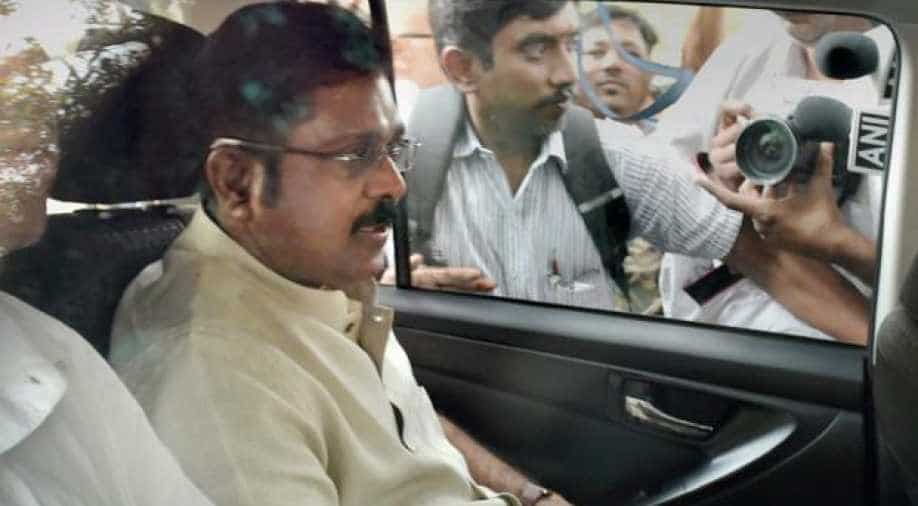 Dhinakaran had asked for the 'pressure cooker' symbol as under it he had in December last year won the Radha Krishnan Nagar Assembly by-election with a margin of over 40,000 votes.

The Supreme Court on Thursday said that the 'pressure cooker' symbol can be allotted to TTV Dinakaran-led Amma Makkal Munnetra Kazhagam (AMMK) for the upcoming Thiruvar bypolls if Delhi high court doesn't decide on the 'two leaves' symbol case.

The Delhi High Court had on March 9 last year directed the Election Commission (EC) to allot a common symbol, preferably that of a 'pressure cooker', and a name to the then AIADMK (Amma) faction led by Dhinakaran.

A bench of justices A M Khanwilkar and Ajay Rastogi said if the high court does not dispose of the pending case regarding allocation of symbol within four weeks then the EC may proceed as per the March 9, 2018 order.

The top court also vacated its earlier order of abeyance on the high court's order, which was issued after the Tamil Nadu Chief Minister E K Palaniswami-led AIADMK faction had moved the apex court.

The high court's order was passed on an application by Dhinakaran in his main petition challenging an EC order of November 23, 2017, which had allotted the 'two leaves' symbol to the group headed by Palaniswami and his deputy O Panneerselvam who opposed the grant of any relief in the matter.

The interim plea had sought the allocation of a name and symbol till the pendency of the main petition, claiming that otherwise the poll panel might declare it as a separate party.

Dhinakaran had asked for the 'pressure cooker' symbol as under it he had in December last year won the Radha Krishnan Nagar Assembly by-election with a margin of over 40,000 votes.

The Palaniswami-Panneerselvam group had opposed Dhinakaran's plea on several grounds, including that his faction has to register itself as a separate party to get a name and symbol and that the appropriate forum for the matter was the Madras High Court.

Rejecting their contentions, the court had said Dhinakaran's faction cannot be compelled to register as a new political party and then apply to the EC for a symbol as then his plea laying claim to the 'two-leaves' symbol would become a fait accompli.

Another reason given by the court to reject the Palaniswami-Panneerselvam group's contention was that there had been "no final determination of the question as to which is the splinter group and which group truly/actually represents the AIADMK party".

On the issue of jurisdiction, it had said merely because most of the respondents, who belong to the Palaniswami-Panneerselvam group, are situated in Tamil Nadu, does not take away the jurisdiction of the Delhi High Court to hear the matter.

It had also noted that the group led by Palaniswami have been entitled to the exclusive use of the AIADMK party name and 'two leaves' symbol and "would not be prejudiced by an order allotting a separate non-identical common symbol to the splinter group".

The EC in March, 2017 had given the 'hat' symbol to the Dhinakaran group after it froze the use of the 'two-leaves' symbol to which the group led by Palaniswami and Panneerselvam had also laid claim.

The Palaniswami-Panneerselvam faction had at the same time been granted the 'electric pole' symbol.

However, on November 23, 2017, the poll panel had ruled in favour of the Palaniswami-Panneerselvam faction by allotting the 'two-leaves' symbol to them.

The symbol issue has been lingering since April last in the aftermath of the announcement of the by-election to Radha Krishnan Nagar Assembly constituency in Tamil Nadu following the death of AIADMK chief J Jayalalithaa in December 2016.

Earlier, rival factions led by Sasikala and Panneerselvam had staked claim over the symbol. Palaniswami was then in the Sasikala camp. Later, a large number of legislators led by Palaniswami revolted against Sasikala.