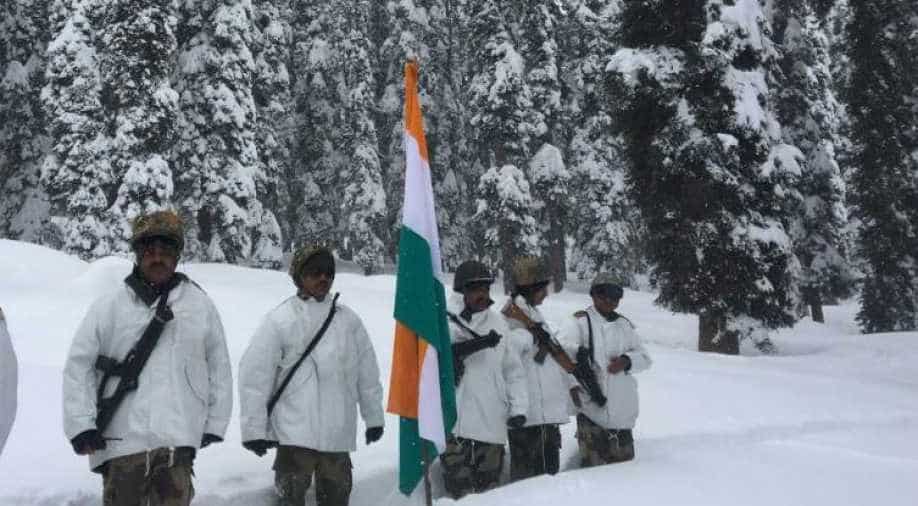 Every morning, wearing special white jackets, security personnel head out on their usual patrol with heavy guns and other equipment to guard the fence. Photograph:( WION )

Security personnel happily celebrate Republic Day with their colleagues. Special meals are cooked and self-made sweets are distributed to mark the occasion.

The winter is harsh and temperatures have dipped to minus 20 degrees Celcius at the line of control between India and Pakistan. The Border Security Force (BSF) personnel are maintaining a tight vigil around the fence, despite all odds. The snow is 8-feet deep and the enemy can fire from anywhere, its an act of bravado that keeps these men going at an altitude of 4 thousand metres.

Every morning, wearing special white jackets, security personnel head out on their usual patrol with heavy guns and other equipment to guard the fence. They look at every suspicious movement and look out for an unusual enemy - an avalanche. The bunkers are mostly covered with snow and walking on frozen snow is difficult.

"During the day, we patrol the fence and at night we set special points where we do our duties in shifts, so that enemy doesn't come beyond the fence. If someone comes close, we have orders to fire and kill", said BSF Sub-inspector, Brij Tyagi.

BSF jawans carry tri-colour with them to hoist it near the line of control and remember those who have fallen in the line of duty. For them, celebrations are limited but the morale remains high even in adverse conditions. They say that they are happy in celebrating Republic Day with their colleagues with whom they have developed a strong bond over the years. Special meals are cooked and self-made sweets are distributed to mark the day.

"On national festivals, we have to be extra vigilant and carry out extra patrolling. Our nation should remain happy and people should distribute sweets without any worry. We are here for the protection of our nation," noted Head constable Bharat Singh.

The operations don’t stop even for a minute here. A round-the-clock vigil is the only way to keep a sneaking enemy at bay. In this area here, the lull only breaks with the bang of guns.