Rs 3.5 lakh crore will be invested in Jal Jeevan Mission in next 5 years: PM Modi 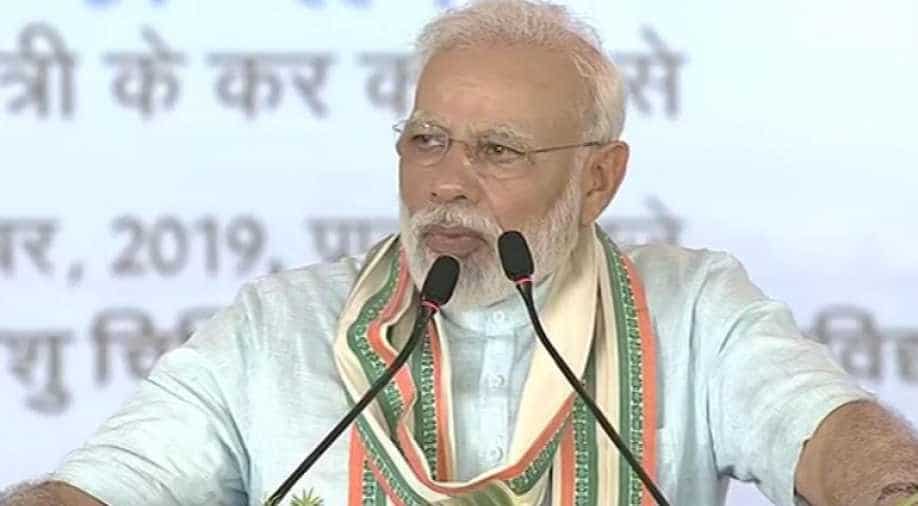 The traditional water system in villages should be revamped and a new system should be developed where the household water is recycled and is used for irrigation, Modi said.

Prime Minister Narendra Modi on Friday said that his government would invest Rs 3.5 lakh crore in five years to cater to the need of water for drinking and irrigation purposes, reported news agency ANI.

"I will put maximum emphasis in the next five year on the water under the Jal Jeevan Mission. We are planning to spend Rs 3.5 lakh crore in the next five years so that our mothers and sisters, and farmers don`t have to face the shortage of water. Our effort is to ensure that farmers do not have to rely only on weather," Modi was quoted as saying in an election rally.

The traditional water system in villages should be revamped and a new system should be developed where the household water is recycled and is used for irrigation, Modi said.

"It is imperative that we revive the old systems of water management, which used to exist in villages. We want to create systems that can help in recycling household water and which can be used for irrigation. And I`m hopeful that the country will be successful in doing so by 2024," said Modi.

Slamming the opposition parties, Modi said its leaders are busy fighting among themselves and cannot give stability to Haryana.

"When the BJP government in Haryana was taking decisive steps for the development, what was the opposition doing? They could not fight with us. So they were busy fighting among themselves. They destabilised their parties for self-interest. Can they give stability to Haryana," asked Modi.

He said that the opposition has no right to ask for votes in Haryana as it has given the share of the state water to Pakistan during its rule at the Centre.

He said that the "water over which Haryana farmers have the right will not flow into Pakistan now.

The assembly elections in Haryana are scheduled to be held on October 21. The votes will be counted on October 24.