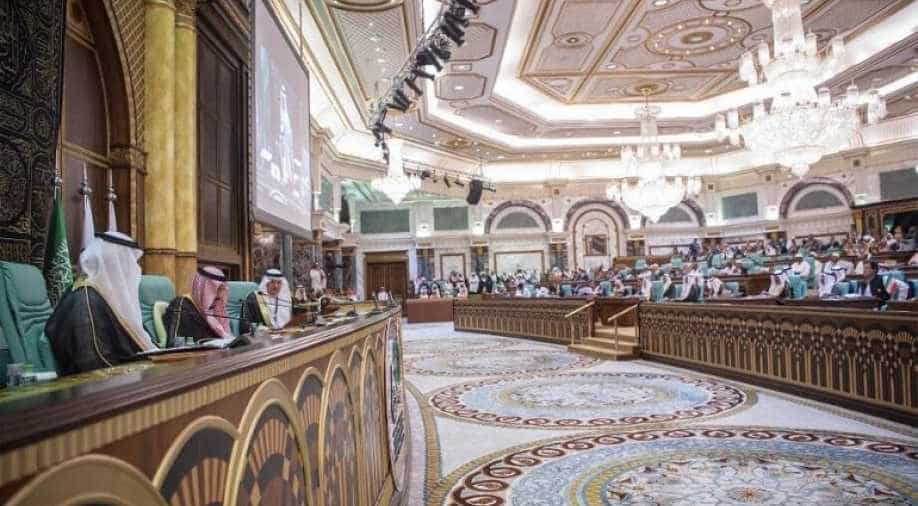 This handout photo released by the Saudi Royal Palace shows a general view of a summit meeting of the 57-member Organization of Islamic Cooperation (OIC) held in the Saudi holy city of Mecca on June 1, 2019. Photograph:( AFP )

Indian govt sources told WION that the Jeddah based organisation has no locus standi & New Delhi's position is clear on it.

No call has been taken by The Organisation of Islamic Cooperation (OIC) on if any OIC Foreign ministers meet on Kashmir and India's citizenship amendment law will take place or not, OIC member countries have confirmed.

Over the weekend, reports from the Pakistani press, quoting Pakistani govt sources emerged that said during the Saudi Foreign Minister Prince Faisal bin Farhan Al Saud's Pakistan visit it was agreed that Riyadh can call for an OIC FMs meet on Kashmir/CAA.

While no formal call has been made it doesn't look like an open-ended OIC FMs meet would happen by April 2020, as Pakistani govt sources were claiming. Islamabad could try to form a consensus for OIC Executive Committee Council of FM which includes 4 countries — Saudi Arabia, Gambia, Turkey, UAE. Saudi govt sources have so far said, that they have no information yet on any planned OIC FMs meet.

The Saudi FM's call on with Pakistani PM Imran Khan also saw Kashmir being raised by the latter. A Pakistani PMO release said, "The enhanced role of the OIC in the context of Jammu & Kashmir dispute was discussed."

While no official reaction has come from India on the developments, Indian govt sources told WION that the Jeddah based organisation has no locus standi & New Delhi's position is clear on it.