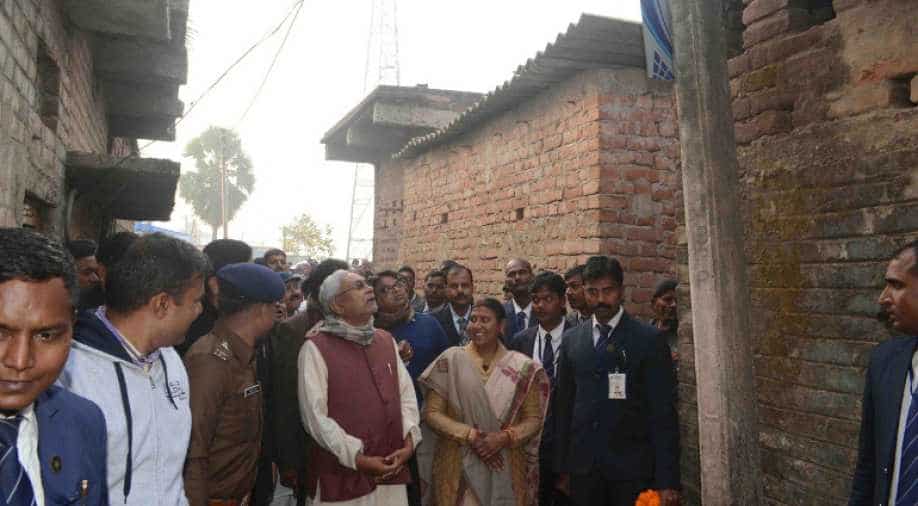 Nitish Kumar is known for his interest in archaeology. Photograph:( Twitter )

A mound spotted by Bihar Chief Minister Nitish Kumar at a village in Sheikhpura district has yielded potsherds, perhaps dating back to 1000 BC.

Potsherds are pieces of broken ceramic pot or other earthenware that have archaeological significance.

"We visited the site yesterday and were thrilled to discover a number of potsherds which give a hint about the antiquity of the mound," Executive Director of the K P Jayaswal Research Institute, Bijoy Kumar Chaudhary, said yesterday.

The state-run institute, located in the Patna Museum building, research in the field of history and archaeology.

"Black slip wares and black and red wares found at the site appear to be of a period around 1000 BC. We also found some red furnished ware that could date back to the Neolithic period," Chaudhary told PTI.

A team of archaeologists conducted preliminary explorations at Pharpar village in Ariyari block after getting a call from Chief Secretary Anjani Kumar Singh.

The chief secretary, who was accompanying the chief minister during his visit to the village on Friday, telephoned Chaudhary after Kumar noticed the mound and observed that it looked like a site of historical and archaeological importance, he said.

The village is about 120 kilometers from the state capital.

The archaeologists also found some fragmented sculptures of Buddha, Lord Vishnu, and some female deities.

"Fragmented sculptures had been found in the village earlier also when our institute was carrying out state-wide explorations. But the mound was overlooked at that time," Chaudhary said.

Preliminary exploration has established the archaeological significance of the spot, he said.

"We now plan to conduct a comprehensive exploration which may yield many more artifacts and shed light on the historical significance of the obscure spot," Chaudhary said.

The spot was noticed by the chief minister on Friday when he was there on his 'Vikas Samiksha Yatra', to take stock of the development work carried out by his government.

Nitish Kumar is known for his interest in archaeology.

At his instance, a "Bihar museum" has been set up in the state capital, which was inaugurated a couple of months ago while museums across the state are being given a face-lift.

After the ancient Nalanda University got the UNESCO World Heritage status in 2016, Kumar is now making efforts to get the same tag for the cyclopean wall at Rajgir.

A cyclopean wall is constructed without mortar, using enormous blocks of stone.