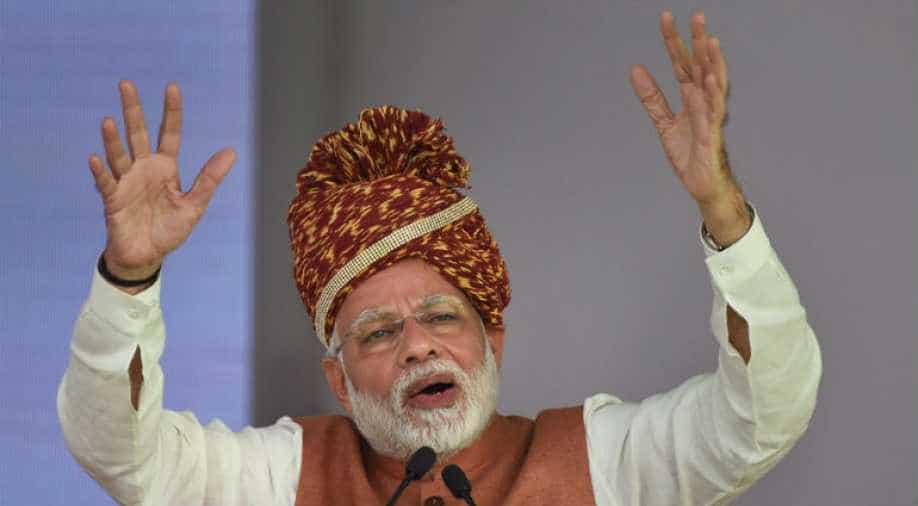 The prime minister said the credit given to people by banks between 2006 and 2014, when Congress was in power at the Centre, was more than the money given to people since Independence.

Blaming the previous Congress rules for bank defaults, Prime Minister Narendra Modi on Monday alleged the defaulters used to carry the party's name as "taveej" (amulet) as a shield but his government has acted strongly against such people and even "big crorepatis" have been forced to pay up.

Modi alleged that banks were "looted" by "naamdaar" who used to make telephone calls to the lenders to sanction loans.

Addressing an election rally here, he said those shedding "crocodile tears" for farmers should come to Rajasthan "to see" whether lands of farmers were purchased at a throw away price or not by people allegedly close to the Congress party in Delhi.

"Had the farmers known about the future and potential of solar power park, would they have sold their lands," the prime minister said.

Talking about the 'amulet', Modi said it saved people who looted government money.

The prime minister said the credit given to people by banks between 2006 and 2014, when Congress was in power at the Centre, was more than the money given to people since Independence.

The prime minister said the BJP government, which came to power in 2014, enacted a law to recover money from defaulters. He said his government made stringent laws such as the Insolvency and Bankruptcy Code, under which Rs 3 lakh crore were recovered from loan defaulters.

"We brought big crorepatis on roads and recovered money," he said.

The opposition parties have been accusing the government of being soft on big corporates and of doing nothing to recover unpaid loans.

"Those travelling with a rose on their shirt had knowledge about parks but not farming. Those who are not able to differentiate between mustard and sesame are giving lessons. Had Sardar Vallabhbhai Patel been the first prime minister,farmers of the country would not have faced misery," Modi said.

He also talked about the Swaminathan Commission, saying the final volume of its report came in 2007 but UPA government did not act on its recommendations on the Minimum Support Price to farmers.

Citing contribution of the Bishnoi community, he said members of the community laid their lives to protect the environment and India received the accolade of 'Champions of Earth' due to their efforts.