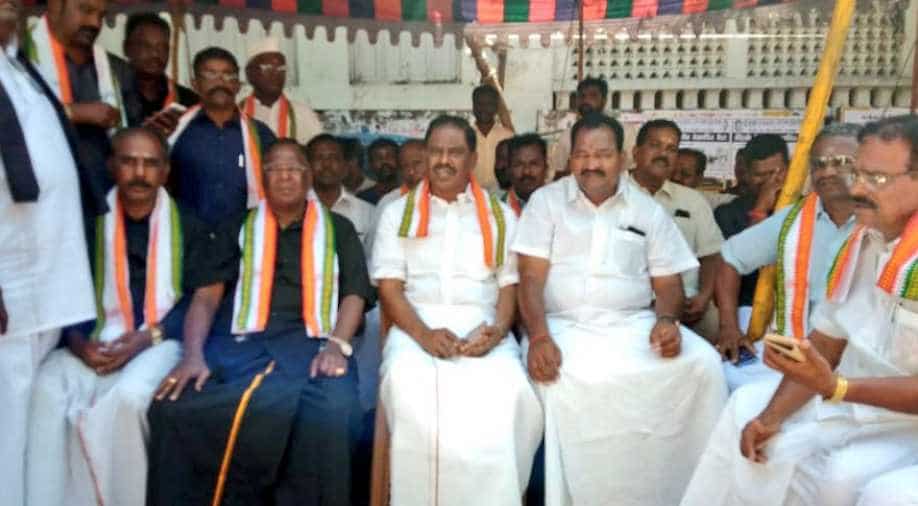 The protest led by Puducherry Chief Minister V. Narayanasamy in front of the Raj Nivas against Kiran Bedi entered the fourth day on Saturday Photograph:( Twitter )

Responding to the letter posted by Bedi on her blog, Narayanasamy in a series of tweets hit back at the Governor questioning her efforts to work for the people of the state.

As the protest led by Puducherry Chief Minister V. Narayanasamy in front of the Raj Nivas against Kiran Bedi entered the fourth day on Saturday, the Lieutenant Governor wrote an open letter inviting the Chief Minister for a discussion in a public forum.

Responding to the letter posted by Bedi on her blog, Narayanasamy in a series of tweets hit back at the Governor questioning her efforts to work for the people of the state.

"Please do not fool Puducherrians by your social media campaigns," he tweeted.

Delhi Chief Minister Arvind Kejriwal too took to Twitter to express solidarity with his Puducherry counterpart.

"An elected CM @vnarayanasami is being forced to sleep on road since last three nights. What kind of democracy is this? Those elected by the voters are begging in front of those defeated. Why is the vote of those living in Delhi n Puducherry inferior to other states?" Kejriwal said.

Meanwhile, DMK MP Kanimozhi tweeted saying, “it is condemnable that the Lt Governor Kiran Bedi is functioning in such a manner as to disrespect the elected government and to disrupt the working of the administration.”

In her `open` letter, Bedi said that she is ready to discuss all issues in presence of the state Chief Minister and his cabinet ministers.

"I am open to discuss all issues in an open public forum where HCM, his cabinet colleagues and members of the public are present along with Chief Secretary and the Finance Secretary and others on financial issues raised by anyone to inform the common people how we have carefully worked to save money for the poor," she said.

Bedi in her letter talked about how the Raj Nivas had been working for the last two and half years for the betterment of Puducherry despite resistance from certain vested interests.

In her letter, Bedi also said, "Efforts were also made to strictly work within the allocated budgets passed by the Legislative Assembly so that we do not borrow more (within limits) which shall have to be paid back by our children after some years. We used all money correctly for the poor and never allowed any diversion.  We were supported by the Chief Secretary and the Finance Secretary in doing so."

The L-G also posted on her twitter, a photograph of the Chief Minister sitting at the protest venue flanked by his secretary. “Is this lawful Mr. CM... What if a common man had done this outside your office. What would you have expected the police to do?” Bedi wrote.

To this the Chief Minister retorted on Twitter: " Police is doing its duty in upholding the law with your RAF friends. Being in charge of the Home portfolio in #Puducherry, I am also doing my job perfectly for maintaining peace here.