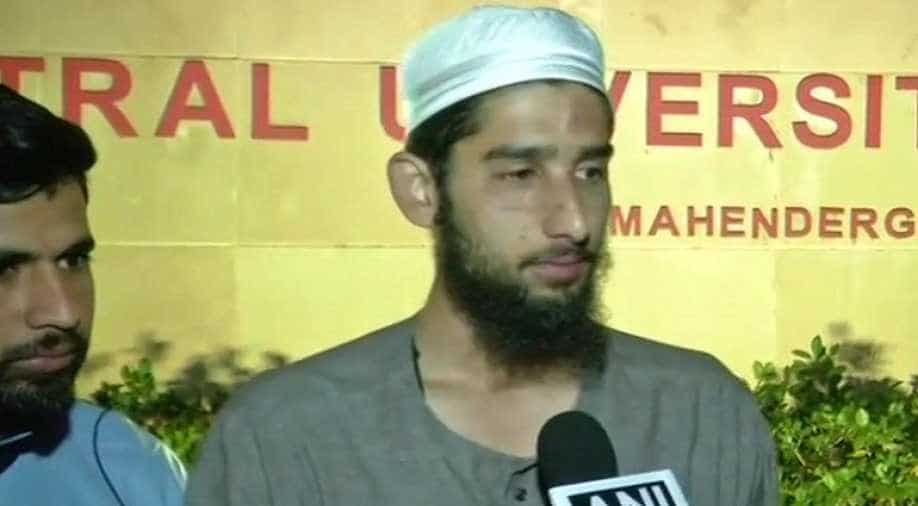 CM Mehbooba Mufti said she was 'shocked and disturbed to hear reports of Kashmiri students being assaulted in Mahendragarh, Haryana.' Photograph:(ANI)
Follow Us

The Haryana police on Saturday informed that out of six people accused in the alleged assault of Kashmiri students in Haryana, three have been arrested while the other three have been identified.

The police informed the arrest took place on the basis of the CCTV footage.

#Haryana Total 6 people are accused in incident of assault on 2 Kashmiri youth in Mahendergarh out of which 3 people have been arrested and 3 others identified on the basis on a CCTV footage. Investigation is underway: Kamaldeep, SP, Mahendergarh pic.twitter.com/KTxHUZLCgg

Jammu and Kashmir Chief Minister Mehbooba Mufti has urged the Haryana government to take stringent action against the perpetrators for assaulting Kashmiri students and demanded a probe into the case.

Mehbooba made the statement on Friday, hours after reports of the Kashmiri students of the Haryana Central University being assaulted surfaced.

The victims were beaten up while returning to the campus after offering congregational Friday prayers in Mahendragarh town.

"Me and my friend had gone to the mosque to offer namaz yesterday after we came out of the mosque, we noticed some people following us. Just as we were leaving on my motorbike, a group of 15-20 people started to beat us, said  Aftab, a Kashmiri student at the Central University of Haryana in Mahenderhgarh.

"No one came forward to help us. Soon after police arrived at the spot. We went to the hospital for a checkup and returned to the university campus. We told faculty about the incident and lodged a complaint with University," Aftab, added.

Shocked & disturbed to hear reports of Kashmiri students being assaulted in Mahendargarh, Haryana. I urge the authorities to investigate & take strict action. @mlkhattar

Former Jammu and Kashmir chief minister Omar Abdullah tagged Prime Minister Narendra Modi in a tweet and said that the incident was against the spirit of his outreach for Kashmiris.

This is terrible & goes against the spirit of what @PMOIndia @narendramodi ji said from the ramparts of the Red Fort. I hope the authorities in Haryana act quickly against this violence. https://t.co/5vBU2CxHMD

The reason behind the attack is not known yet.

Jammu and Kashmir Director General of Police Shesh Paul Vaid has been coordinating with his Haryana counterpart to ensure the safety of the Kashmiri youths.

"In touch with DGP Haryana. Police is taking cognisance of the incident," he said.

With regard to physical assault on some students of J&K in #Haryana's Mahenderhgarh, Haryana Police has taken cognizance. FIR u/s 148/149/341/323 IPC has been lodged in Mahenderhgarh police station. 0ne of our officers is in touch with the boys as well: Jammu and Kashmir Police

The victims suffered injuries in the attack and were taken to the local hospital.

They were, however, released after treatment.

Meanwhile, the Opposition in J&K assembly also raised the issue of students assault and sought a reply from the state government.

Opposition in Jammu & Kashmir assembly raised the issue of alleged assault on two youth by a mob in Haryana's Mahendergarh, demand reply from state government.