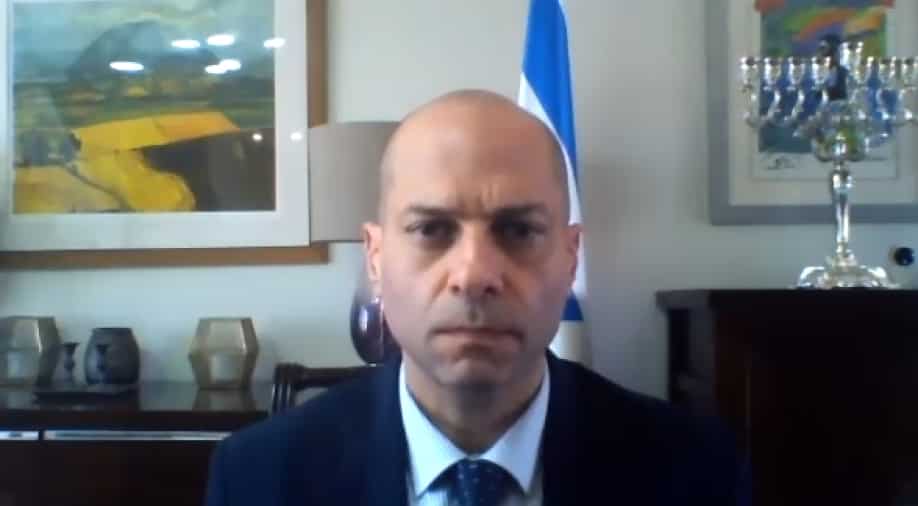 Zadka said, "It was important for us to be able to send somebody in person to be with the family".

"Very emotional" visit, that is how Israel's top diplomat in South India, Consul General Jonathan Zadka, described his visit to the house of Soumya Santhosh in Kerala. Soumya, an Indian caregiver, was killed in Israel's Ashkelon due to Hamas airstrikes from Gaza.

Speaking from Bengaluru to WION Principal Diplomatic Correspondent Sidhant Sibal, Zadka said, "It was important for us to send somebody in person to be with the family". Soumya is survived by a nine-year-old son and her husband.

Zadka also appreciated the "positive response" his country has got from India, which he said is due to "friendly relations we have between Israel and India for such a long time".

An outpouring of support has been seen on Indian social media for Israel amid the current situation emerging with Palestinian territories.

Sidhant Sibal: You were in Kerala at the house of Soumya Santhosh and met the family. It was seen as a warm gesture. Your reaction.

Jonathan Zadka: I just got back from Kerala late last night. It has been a very short and intense visit, very emotional and logistically complicated on my part. It was a last-minute decision and like you said, a basic humanitarian gesture, nothing more than that. It was important for us to be able to send somebody in person to be with the family, in this time of need and show our tangible personal support to them in this time of grief.

Sidhant Sibal: And Since the mortal remains arrived, we have seen the presence of Israeli diplomats. In Delhi, Rony Yedidia-Clein was present at the airport. Call taken at the higher-ups?

Jonathan Zadka: It even goes further than that. We have been trying to support and to make the process of moving the body to India for burial as smooth as possible. Support the efforts of the Indian government, both in the embassy in Tel Aviv and elsewhere. By doing this here in Delhi and elsewhere, even if it was no coordinated, this is something that is an automatic gesture on our part. Being in the situation we are in right now, and being her killed by the same terrorists targetting us, this is a bond that cannot be broken and the response we have taken, the steps that have been done on the ground, I think are very personal and combine as a whole gesture towards the unbelievable situation the family finds itself in.

Sidhant Sibal: How many Indians are present in Israel?

Jonathan Zadka: It is difficult to say about the number of Indians working in Israel, It varies between people that are staying between the people who are staying for the long part, for the short part. People are in the transition at any given time regardless of the covid. To pinpoint a number is extremely complicated. At any given time, there are between hundreds and thousands of Indian workers in Israel, permanently, and aside from that, we have students and business people that stay there for a longer period. I can tell u part of the more emotional reactions that I got were actually from fellow Indian caretakers in Israel that have watched reporting from India about the funeral and have provided me with a positive reaction to the steps we have taken here.

Sidhant Sibal: How do you see the spontaneous support on social media for Israel?

Jonathan Zadka: The support is amazing. We see it in all layers and all levels of society. Ordinary usual ongoing contact people, just the people on the street or the people that may have known as including officials and so on. We are enjoying I think such a positive response, because of the good nature and the friendly relations we have between Israel and India for such a long time. From the other end, very humanitarian basic, a show of solidarity in our time of need and we extremely appreciate it. Reflects the good nature of relations we have with India, in all level to be honest.

Sidhant Sibal: Do you think the situation will abate when it comes to what is going on?

Jonathan Zadka: We have been under this sort of indiscriminate rocket attacks from Gaza for the past week. The situation on the ground as you can imagine is very complicated. Millions of Israeli citizens are still under the threat of rockets and just before coming into this interview, there was another rocket launched towards the south part of Israel. From the whole perspective, you know, this is a very complicated and enduring situation. Israel is trying to make sure that such infrastructure that can pose a future threat to Israel would not be available. The fact that Hamas, Islamic Jihad organization and other fractions can threaten Israel, threaten Israeli citizens, and target civilian targets in Israel as hospitals, schools, regular homes is something that no country will be able to tolerate and Israel will do whatever it needs to defend itself and to defend its citizens. I do hope the situation will ease in the next few days, or as soon as possible and we can come back to a normal quiet, and peaceful co-existence but this very much depends on the way Hamas decides to act. This is to remind you, this is a terrorist organization, that controls Gaza for the last decade and holds the population of Gaza hostages, trying to attack Israel on different occasions for its purposes and interest. This is the result we see on the ground, and from any objective point, no one will tolerate such a situation.

Sidhant Sibal: Assistance from Israel has reached South India too. Can you provide the details?

Jonathan Zadka: A lot of equipment was sent from Israel to India, coordinated by our embassy in Delhi. Part of the equipment was allocated to south India. We were very fortunate to get 2 of the oxygen generator plants to be placed in Karnataka. One, I can happily share with you operated last evening in Kolar in Karnataka and the other will be installed in Yadgir, north Karnataka, hopefully. Aside from that, we are expecting, to be receiving a few hundred smaller oxygen generators to support the Karnataka government.