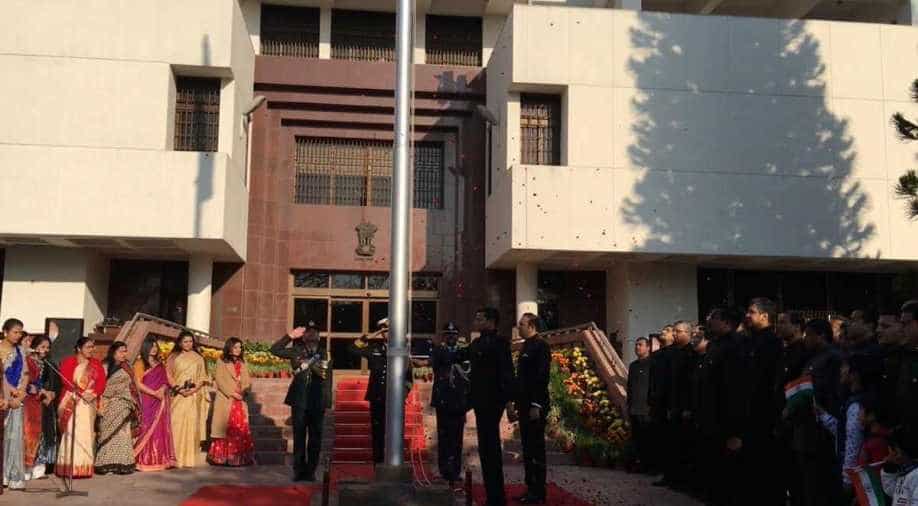 From Afghanistan to South Sudan, Indian communities and missions celebrate Republic Day on Saturday. One of the first countries to celebrate India's Republic day was New Zealand with High Commissioner Sanjiv Kohli unfurling the national flag.

In South Asia, Indian missions and communities celebrated India's Republic Day with full enthusiasm. In Bhutan, the National Flag was unfurled by Ambassador Jaideep Sarkar. Dasho Ugyen K. Namgyel, Gyalpoi Zimpon to Bhutanese King, presented a scarf to the Ambassador on behalf of the Royal Government of Bhutan. Zimpon along with the Cabinet Secretary, Foreign Secretary and the Chief of Protocol represented Royal Government of Bhutan in the ceremony. Over 500 members of the Indian community were present at the ceremony.

Indian ambassador to Afghanistan Vinay Kumar unfurled the flag at the Indian embassy in Kabul. New Delhi is playing a vital role in the country and is a leading development partner. There have been a number of engagements between Afghan and Indian government in January 2019 itself. External Affairs Minister Sushma Swaraj met the Afghan Foreign Minister Salahuddin Rabbani and Afghanistan National Security Adviser (NSA) Hamdullah Mohib visited New Delhi.

In Herat, the Indian flag was unfurled by Indian Consul General Kumar Gaurav. Herat is the same province in which India Afghanistan friendship dam is located. Indian PM Narendra Modi has been to Herat in 2016 to inaugurate the dam built by New Delhi's help. India is also building a number of schools in the western Afghan province.

Republic day was celebrated with full enthusiasm at the Indian mission in Islamabad. High Commissioner Ajay Bisaria unfurled the tricolour and read Rashtrapati Kovind's message. Speaking to WION correspondent Anas Mallick in Islamabad, Indian high commissioner Ajay Bisaria said, "we are celebrating the 70th Republic day. It is also a special moment because we also celebrating the 150th birth anniversary of Mahatma Gandhi. This has a special resonance in Islamabad because of common history and common legacy and we hope 2019 is going to be a positive year and a breakthrough year for India-Pakistan relationship. There are many challenges and we need to work hard to get there."

The Indian troops who are part of United Nations peacekeeping forces in South Sudan celebrated the Republic day at the Indian mission in capital Juba. The event began with the hoisting of the tricolour by the Indian Ambassador to South Sudan, SD Moorthy.

Indian peacekeeping forces are part of the United Nations Mission in South Sudan (UNMISS). New Delhi has provided a battalion of 2400 defence personnel for the peacekeeping operations in South Sudan. The Indian troops are deployed at Juba, Jonglei and Upper Nile Regions.

With Love, from Russia

Talking about India-Russia ties, he said, "The relations between our countries are dynamically developing in the spirit of a privileged strategic partnership. I am convinced that further advance of the entire gamut of Russia-India ties fully meets the interests of our friendly peoples and contributes to ensuring international stability and security."

Republic Day celebrations in Germany were led by Indian Ambassador Mukta Dutta Tomar while in the United Kingdom it was led by the new Indian High commissioner to  Ruchi Ghanashyam.

Ruchi Ghanashyam spoke about how the Father of the nation Mahatma Gandhi has been a source of inspiration for many countries in Asia, Africa and across the world.

In Helsinki, Finland, more than 250 members of the Indian community gathered and the tricolour was hoisted by the Indian ambassador to Finland Vani Rao.

Indian flag was unfurled with full pomp and ceremony by Indian ambassador to Nepal Manjeev Singh Puri. The ceremony was attended by over 1500 Indians. On the occasion, the Ambassador presented the keys of 30 ambulances and 6 buses to various hospitals, non-profit organizations and educational institutions of different districts of Nepal.

Since 1994, India has gifted 722 ambulances and 142 buses to various organizations across Nepal. The Embassy also announced book grant to 54 educational institutions and libraries across Nepal to promote access to educational material to students in remote areas.

The Ambassador honoured 2  Veer Nari, 9 widows and 3 next of kins of deceased soldiers of Indian Armed Forces by distributing their dues worth Nepali Rupees 7.26 Crore and a blanket to each.

Over 700 members of the Indian community gathered to celebrate the Republic day. Ambassador Navdeep Suri unfurled the Indian tricolour. The Embassy also commemorated the 150th birth anniversary of Mahatma Gandhi.

Indian ambassador Akhilesh Mishra unfurled the national flag in presence of members of the Indian community in Maldives. The Ambassador emphasised the valuable contribution of Indians working in the Maldives. Recalling the visit of Prime Minister Modi in the Maldives in November of 2018 during the oath-taking ceremony of the new president of Maldives Ibrahim Solih, Ambassador said both governments are continuing the efforts to further strengthen ties.

Ceremonial Border Personnel Meeting (BPM) took place at the Indian BPM huts at Chushul-Moldo and Daulat Beg Oldie-Ten Wen Den meeting points of Eastern Ladakh. The Indian delegation was led by Brig V K Purohit and Col S S Lamba while the Chinese delegation was led by Sr Col Bai Min and Col Song Zhang Li. "Both sides sought to build upon the mutual feeling to maintain peace and tranquillity along the borders," according to an army release.

Other Part Of The World

Republic day was celebrated at Indian mission in Ukraine as ambassador Partha Satpathy unfurled the national flag. Republic day was also celebrated in far off countries like Estonia. Indian Ambassador to Finland and Estonia Vani Rao presided over the celebration in Estonia with Foreign Minister Sven Mikser as the chief guest.