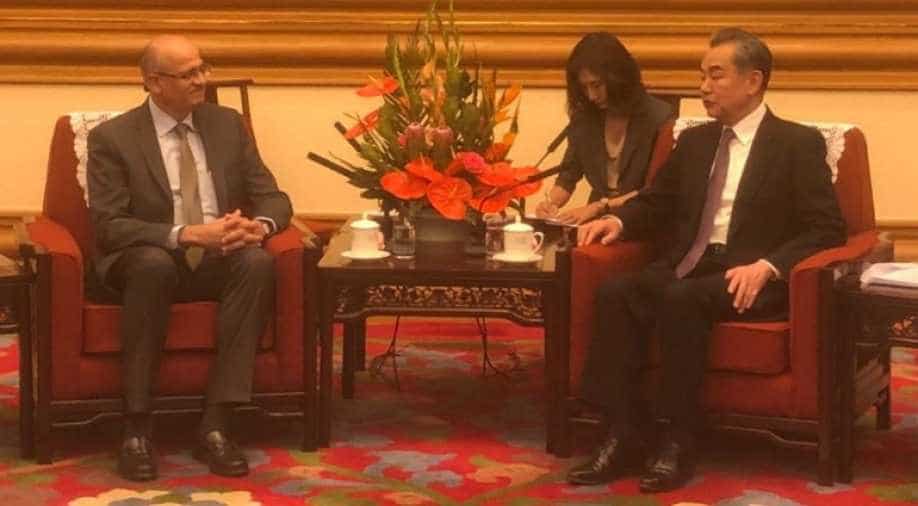 In his opening remarks, Gokhale said it has been a year since Prime Minister Narendra Modi and Chinese President Xi Jinping met at the Chinese city of Wuhan where the two leaders reached many understandings.

Foreign Secretary Vijay Gokhale on Monday held talks with Chinese Foreign Minister Wang Yi and discussed the progress in bilateral ties since the Wuhan summit last year and said both sides were implementing the decisions in a manner in which "we are sensitive to each other's concerns".

His meeting with Wang, who is also the State Councillor, a high-level post in the hierarchy of the ruling Communist Party of China (CPC), took place as both the countries grappled with a host of issues, including Beijing's continued attempts block efforts list Pakistan-based Jaish-e-Muhammed (JeM) chief Masood Azhar as global terrorist by the UN.

In his opening remarks, Gokhale said it has been a year since Prime Minister Narendra Modi and Chinese President Xi Jinping met at the Chinese city of Wuhan where the two leaders reached many understandings.

He said both sides were making efforts to implement the understandings reached the Wuhan meeting.

"As your Excellency said we will work together with the Chinese side to deepen understanding to strengthen trust to implement the decisions that are taken by leaders and to do it in a manner in which we are sensitive to each other's concerns," he said.

He also referred to the "brisk" political exchanges since the Wuhan summit, including Wang's visit to New Delhi to launch people to people mechanism and External Affairs Minister Sushma Swaraj is "looking forward to coming to China this year".

Gokhale, who arrived here on Sunday is also scheduled to hold detailed talks with Chinese Vice Foreign Minister Kong Xuanyou on Monday.
In his opening remarks, Wang said China and India are two emerging market countries besides neighbours and "each other's strategic partners."

"In that sense, it is important for the two countries to work together to increase strategic communication, deepen mutual political trust and strengthen strategic cooperation on international and regional issues.

"Given that it is timely and important for you to have regular consultations with the Chinese side," he said.

One of the issues that were expected to figure during this round talk was China's continued attempts block efforts list JeM chief Azhar as a global terrorist by the UN.

China blocked Azhar's designation for the fourth-time recently stalling efforts by the US, the UK, France move at the 1267 UN counter-terrorism committee following the February Pulwama terrorist attack. It was the first technical hold put up by China post-Wuhan summit.

Also, India continues to have strong reservations to join China's mega Belt and Road Initiative (BRI) due to its objections over the China-Pakistan Economic Corridor (CPEC) as it is being laid through Pakistan-occupied Kashmir.

Both the issues have become major irritants in the bilateral ties.

In order to counter China's technical hold in the 1267 committee, the US, the UK and France have taken the Azhar issue to the UN Security Council (UNSC), which Beijing firmly opposed, saying that it should be resolved by the UN's 1267 Sanctions Committee.

China also said the issue moved towards settlement and accused the US of attempting to scuttling its resolution.

India, like the first BRF held in 2017, is reportedly not attending its second edition being held here from April 25-27.

Foreign Minister Wang said on Friday that differences over the BRI would not come in the way of the development of India-China relations and China is preparing for a Wuhan-style summit meeting this year.

He also said the CPEC is an economic project and has nothing to do with the sovereignty issues.

"One of our differences is how to look at the BRI. The Indian side has its concerns. We understand that and that is why we have stated clearly on many occasions that the BRI including the CPEC is only an economic initiative and it does not target any third country and has nothing to do with the sovereign and territorial disputes left from history between any two countries," he said.