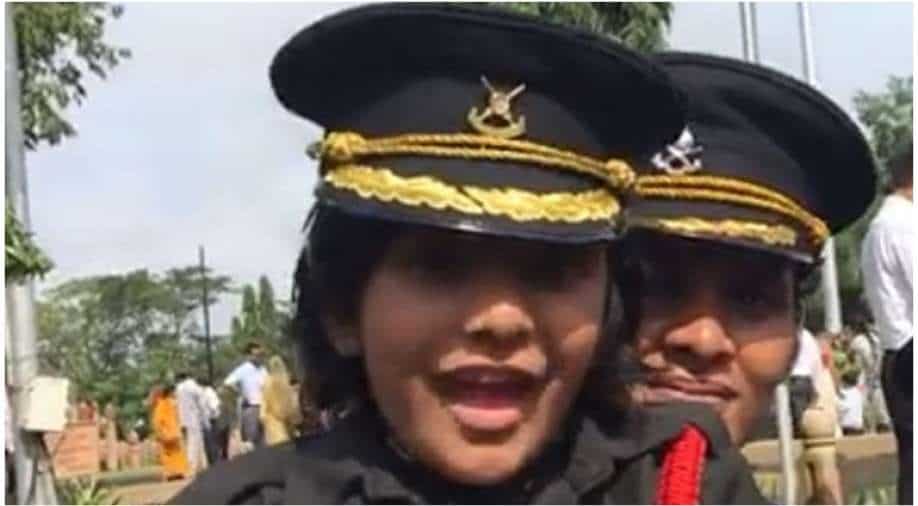 Jyoti Nainwal (at the back), wife of late Indian Army major Deepak Nainwal with her daughter Lavanya Photograph:( WION )

153 Indian cadets(124 men and 29 women) were commissioned into the army as Lieutenant-rank officers, while 25 personnel (16 men and 19 women) from countries such as Afghanistan, Maldives and Bhutan, also completed this course at the Army OTA, on Saturday

“Kadam Kadam Badhaye Ja, Khushi ke geet gaye jaa, Ye zindagi hai qaum ki, Tu qaum pe lootaye ja”
(March, march on forward… Singing songs of happiness as you go… this life belongs to our Motherland, lay it down for the Motherland), 11 year old Lavanya Nainwal sings along with hundreds of other Indian Army officers, soldiers, retired personnel and their families. She is no ordinary girl, she’s an inspiration to a generation! Lavanya is the daughter of late Indian Army Major Deepak Nainwal, who made the supreme sacrifice for the country, fighting terrorists in India’s Jammu and Kashmir. In what is little Lavanya’s most cherished moment, her mother, Jyoti Nainwal, has been commissioned as a Lieutenant-rank officer in the Indian Army, after completing a grueling, 11-month training programme at Chennai’s Officers Training Academy.

153 Indian cadets(124 men and 29 women) were commissioned into the army as Lieutenant-rank officers, while 25 personnel (16 men and 19 women) from countries such as Afghanistan, Maldives and Bhutan, also completed this course at the Army OTA, on Saturday. As they were getting commissioned, the officers sang along as the band played the iconic “Kadam Kadam”, which was the regimental quick march of the Indian National Army (INA), that was led by freedom fighter Netaji Subhash Chandra Bose, in pre-Independence India. The song is also the regimental quick march of the Indian Army and a patriotic song for Indians.

“I’m feeling very proud of my Mumma, she used to always say that I will become an army officer and today she fulfilled her dream…She is best mother in the world, I love her very much”, a jubilant Lavanya Nainwal, told WION. Dressed in Army uniforms, Lavanya and her seven-year-old brother Retansh, are jubilant of their mother’s feat.

“So proud of my mother who has become an army officer, she’s the best mother... I will become an army doctor” says Lavanya as her mom holds back tears and her little brother retansh hugs them #india #IndianArmy @Def_PRO_Chennai @adgpi pic.twitter.com/BcE7clm5wm

The Passing out Parade, at the famed Major Parameswaran Drill Square was reviewed by the Vice Chief of Army Staff Lt Gen CP Mohanty, who urged the young Officers to live fearlessly and walk with their heads held high. Sharing his advise with the newly-commissioned officers, he said that they were all living in glass houses, where the men and women under their command were watching all their actions.

“They are part of your conscience, there is nothing hidden from them. Be that person, for whom they are willing to lay down their lives” he added.

Among those passing out of the academy were youths from various academic and socio-economic backgrounds who were the first in their respective families to join the armed Forces, while some others were second or third-generation soldiers, while two of them joined as ‘Veer Naris’. While Veer Naris undergo the same training as their younger counterparts, the army only relaxes the age criteria to accommodate the women, whose respective husbands had made the supreme sacrifice for the country. However, there is no descrepancy in physical training or academic standards.

“My motivation and inspiration was my mother. I have seen her being devoted to the nation for 28years of her service, she retired as a Lt Colonel. I want to strive and be deserving of her legacy and that was my motivation,” Abhijith Nair, a newly-commissioned lieutenant told WION.

The young engineer with a specialization in Electronics and Communication, found his stint with the National Cadet Corps (NCC) very useful in preparing for the challenging and adventurous army life. Holding back her tears, Abhijith’s mother (Retd) Lt Col Vanaja said that it was a very proud moment as a mother and that she had been motivating her son from his formative years.

Abhijith Nair, an electrical engineer and former NCC cadet on how he’s inspired by his mother, a retd army Lt col.. she had been motivating him from a very young age...

NCC gave him a great deal of exposure and experience...

He wants to strive and match his mother’s legacy pic.twitter.com/bbHMGV9eNc

“Being from an army family, pursuing my school education in an army school has been a great motivation and enrolling in NCC is one of the most important factors that motivated me to go to OTA. Its been a great journey and I’ll be serving the nation with great effort and hard-work” she told WION.

Himanee Singh Bisht has done her family proud... her dad is a retired non commissioned army officer... today, himanee is a lieutenant, a commissioned officer and has surpassed her father and has a long journey ahead.. she will give it all and serve Indian army pic.twitter.com/Ebe4AcuJgm

Thakur Bhagwan Singh Bhati from Jodhpur is an elated man after having seen both his daughters get commissioned into the Indian Army as officers. The retired banker’s elder daughter Divya Singh Bhati is a serving army captain, whereas the younger daughter, Dimple Singh Bhati got commissioned on Saturday, while also winning the OTA Silver medal for overall performance. It was a special moment as Divya and Dimple posed before the ‘Rezang La’ block of the OTA, along with their father, as their family are related to Param Vir Chakra Maj Shaitan Singh, who made the Supreme sacrifice for India in the 1962 war against China, at Rezang La.

Major Shaitan Singh led nearly 120 Indian soldiers in a battle against over 1300 Chinese troops. Indian soldiers fought till the last man was standing and last bullet was fired and inflicted heavy casualties on the Chinese, this, while operating in the inhospitable terrain and temperatures at an altitude of 17,000 feet or nearly 5100 metres.

Bhagwan Singh is a proud dad,both daughters of this retd banker are serving the Indian army. elder daughter Divya is a captain rank officer..younger one, dimple won the silver medal and has been commissioned as a lieutenant

They are related to 1962 hero PVC Maj shaitan Singh pic.twitter.com/NDLQMvSSuT

“Army always supported me, because of which I’m here.. I’m inspired by my daughter, she was too young to understand what was happening. I wanted to show my daughter and every woman, that when life puts you down, you always have to come back strong,” Lieutenant Chinamaraju Mounika, a Veer Nari and wife of army aviator, late Major Gopikrishna, told WION.

@adgpi always supported me.. my daughter was my greatest inspiration , she was too young to understand (her dad’s demise).. all woman who have fallen have to come back strong, says veer nari Monika, w/o late army aviator, late major Gopikrishna pic.twitter.com/GtS3yzGy6P

Having completed their course and Commissioning, these scholar-soldiers of the Indian Army will be posted to various parts of the country, to serve, defend the motherland and bring glory.

Full #josh on course completion, after 11 months of blood and sweat being shed at ota #Chennai @CMOTamilnadu @mkstalin pic.twitter.com/ffRMCyQo0B

After push-ups, they carry their course mates on their shoulder and scream out loud their company war cry and similar patriotic slogans... #india #IndianArmy