Easier to do business in India than China: Trump Jr 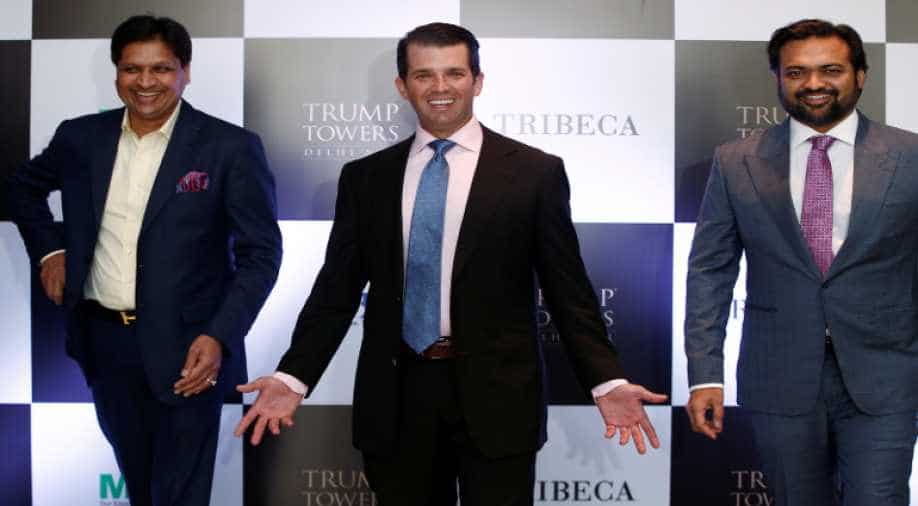 Donald Trump Jr. gestures as Basant Bansal, Chairman and Managing Director of M3M India and Kalpesh Mehta, founder of Tribeca Developers, look on during a photo opportunity before the start of a meeting in New Delhi, India, February 20, 2018 Photograph:( Reuters )

The United States President Donald Trump's son Donald Trump Jr on Friday praised the overall business environment in India and reiterated that it was easier to do business in India as compared to China.

Speaking at the 4th Global Business Summit here, Trump Jr. said: "Indians do have a special entrepreneurial flair. It's easier to do business with Indians, because of the language, common law, the ability to build reliable relationships. It is almost like doing business back in the United States. For me, it has been, certainly been, easier to do business in India."

He was replying to a question during the meeting on why the Trump Organisation chose to build ultra-luxury apartments in India first than in China.

Acknowledging that real estate in India had been going through a tough time, he saw it as a period of cleansing.

"I have been coming here for ten years. Real estate was a four-letter word. People promised X, and delivered X minus a lot if anything at all." Things have changed a lot here, Trump Jr. said.

On the development of luxury real estate projects in India, Trump Jr. stated that his business brought "authentic and truly global luxury" to India.

"This is now a mature market, our clients fly the world over; they know what luxury is and they are seeking it here. India was behind in such projects, but it has now caught up with the global standards," he said.

Also, he added that ever since Trump took over the president last year, the Trump Organisation would not sign any deals with any country, in order to avoid "conflict of interests" from the White House.

Trump Jr. is on a week-long visit to India to endorse his luxury real estate project, the Trump Towers in Gurugram, Pune, Mumbai and Kolkata.

He called on several real estate developers at Oberoi Hotel in Delhi and met with the members of real estate firms- M3M India and Tribeca Developers.

According to business partners in India, many units in the Trump Towers are selling about 30 percent per square foot higher than the current market rates. Trump Jr.'s visit to India is expected to reinforce the trend.

The Trump Organisation has more business entities in India than in any other foreign country, financial filings show, with licensing bringing in estimated payments of 1.6 million dollars to 11 million dollars since 2014.