Discrimination not acceptable to any nationalist: Venkaiah Naidu 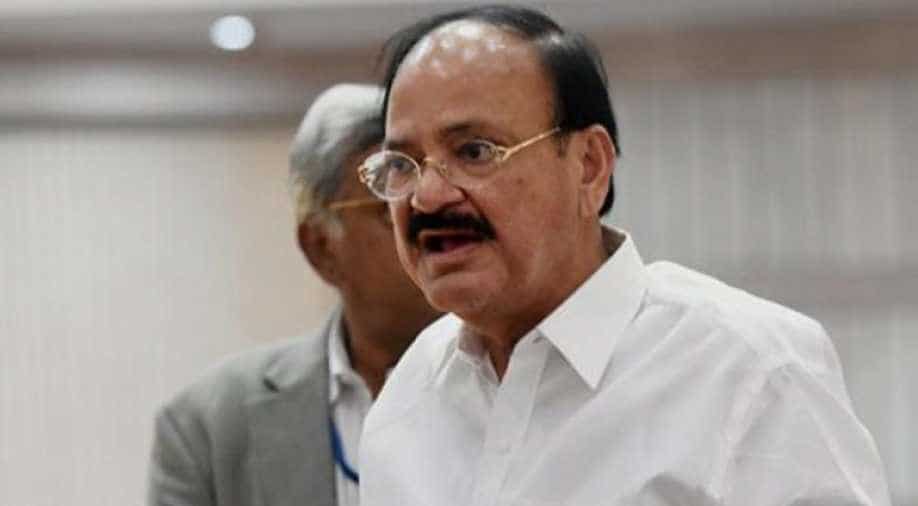 Discrimination on the basis of religion, caste or gender is unacceptable to any "nationalist" and this approach should be followed by everyone, Vice President Venkaiah Naidu said today.

Mr Naidu, who is also the Rajya Sabha Chairman, called for deciding upon a national policy on the need for the Upper House in state legislatures, and urged political parties to evolve a consensus on the code of conduct for their members both inside and outside legislatures.

Noting that the last session was called the "Session for Social Justice", Mr Naidu said it was important to consider and pass legislations that reflect collective commitment to social justice.

"In order to build a more inclusive society, there is a need to move towards ensuring proportional representation of all groups, especially those which have till now been under represented," he said.

"There is a need to cleanse politics, strengthen parliamentary and governance institutions, give a big push to next level of reforms to harness the entrepreneurial and economic potential, harness the energies of young India, and ensure sustainable and remunerative agriculture," Mr Naidu said.

He also called for upholding the rich traditions of cultural diversity and nationalism.

"Nationalism, according to me -- Bharat Mata ki Jai...it means 'Jai Ho' to all the 130 crore people irrespective of their caste, creed, sex or religion.

Talking about the issue of political defections, he said the anti-defection laws should be implemented in letter and spirit expeditiously, within three months. "I know that this is absolutely feasible since I could dispose off the petitions that I received within this time frame," Mr Naidu asserted.

The Rajya Sabha chairman in his remarks urged all political parties to evolve a code of conduct for Member of Parliament and lawmakers, both within and outside the Houses for effective functioning of legislatures to restore the confidence of the people in parliamentary institutions.

Voicing concern over the functioning of legislators in the country, he also urged parties to come together, transcending political considerations, on issues of national importance.

Mr Naidu described the book launched today, as a report to the people on his mission and its outcomes during the year since he was sworn in as vice president on August 11 last year.

"While there is cause for a great deal of celebration in the way Indian economy is shaping up and how India's standing in the comity of nations has been steadily going up, I am a little unhappy that our Parliament is not functioning as it should," he said.

The Vice President also said election petitions and criminal cases against political leaders should be decided quickly by special benches of higher courts. He also urged political parties to consider issues concerning women dispassionately to ensure their safety and dignity. He called for ending discrimination against women on the basis of religion and other factors.

Mr Naidu called for reservation for women in all spheres, including legislatures.

Stressing that agriculture is the basic culture of the country, Mr Naidu said, "There is a need for a bias towards farmers in resource allocation to ensure remunerative farming and a robust food security."

Last year, in 60 visits to different parts of the country, including all the seven northeastern states, Mr Naidu said he interacted with the youth, farmers, and scientists, and made an effort to promote public discourse on four key issues of broader concern.

He said the four key issues were the huge untapped demographic dividend, an effective and enabling ecosystem for remunerative farming in the country, orienting scientific and research efforts to better the lives of the people, and enhancing public awareness about rich Indian heritage and inculcating national pride in "our pluralistic, inclusive, harmonious world view".

"But I have also referred to the new tidings during the recently concluded Monsoon Session raising hopes. So, there is a hope but we need to stay on course. My earnest endeavour has been to facilitate informed and dignified debates befitting the stature of this hallowed institution," he said.