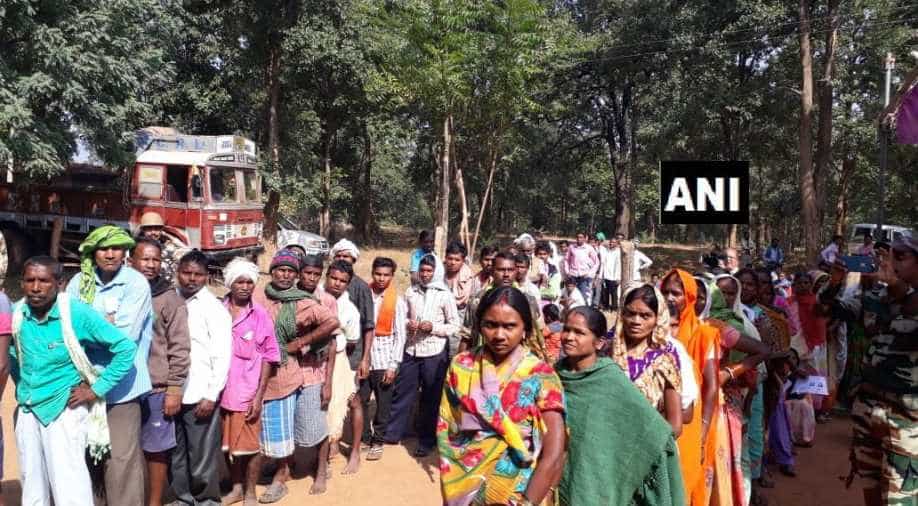 People line up to vote in Rajnandgaon. Photograph:( ANI )

Voting has ended in the 18 seats that went to the polls in Chhattisgarh today. Voter turnout was recorded at 70 per cent.

Voting has ended, turnout is 70% till now in the first phase of #ChhattisgarhElections2018. Figures will be updated later: Umesh Sinha, Election Commission pic.twitter.com/I26aNS7qB7

While polling percentages were high — most of the areas mentioned above are in the Naxal-hit districts of southern Chhattisgarh — polling was marred by violence.

Five CRPF personnel were injured and five Maoists killed in an encounter that broke out in Bijapur's Pamed area.

The Maoists had called for a boycott of the polls and had carried out six attacks over the last fortnight.

After the Nilwaya naxal attack, the challenges have gone up. Naxals had threatened villagers against voting. We assured the villagers of a secure environment, put in place a three level security so that people can vote without fear:CRPF official #ChhattisgarhAssemblyElections2018 pic.twitter.com/gqV7H5Vb4F

#Chhattisgarh: People in Dantewada's Madenda village cast their votes even after threat from the Naxals to cut their fingers if the ink mark is seen on their fingers. Local says, "there are 263 registered voters in the village and many are voting even after the threat." pic.twitter.com/WPDYX9OiEs

Three of the attacks were major, leaving 13 people dead including a Doordarshan cameraman. The Maoists are not known for attacking journalists but the DD cameraman and his colleagues, who were covering the elections, were travelling with security forces.

One lakh security personnel meanwhile had been deployed in Chhattisgarh for the polls.

The remaining seats in the 90-member house will go to the polls on November 20.