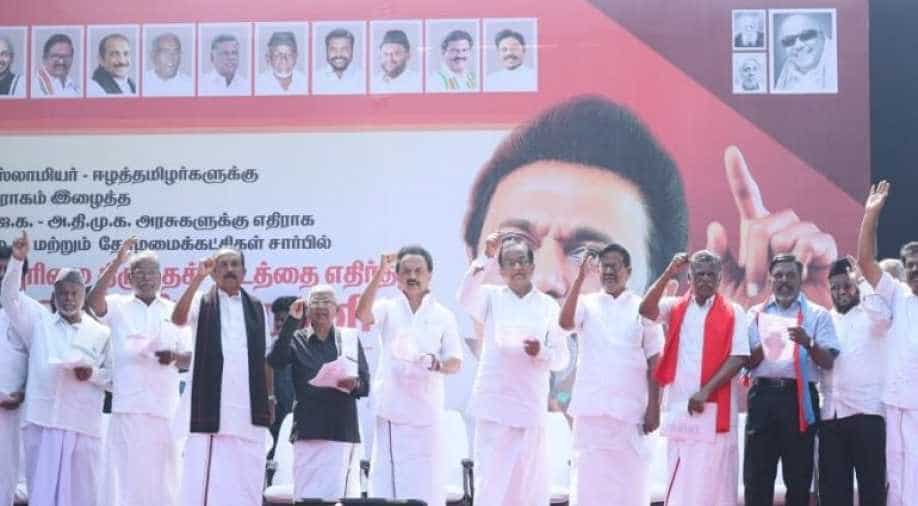 The top rung leaders held anti-CAA placards, demanding its withdrawal, while the party cadre chanted slogans against the contentious act and waved their respective party flags.

DMK President MK Stalin on Monday led the opposition charge from Tamil Nadu against the Citizenship Amendment Act(CAA). Stalin led an anti-CAA rally in Chennai, joined by leaders and cadre of their alliance parties. Stalin was joined by senior DMK functionaries and MDMK Leader Vaiko, Congress Leader P.Chidambaram and leaders of Left parties in the nearly 2km march towards the Rajarathinam Stadium in Chennai’s Egmore.

The top rung leaders held anti-CAA placards, demanding its withdrawal, while the party cadre chanted slogans against the contentious act and waved their respective party flags. Over 5000 Police personnel were deployed in the locality, as the rally was held without the requisite Police permission. The major opposition towards the CAA has been the exclusion of Muslims and particularly in Tamil Nadu the issue of Sri Lanka not being categorized as a neighbouring country, provision of citizenship for Sri Lankan Tami refugees has come to fore.

Late Sunday evening, the Madras High Court had directed that DMK's rally against the Citizenship Amendment Act be captured on video if the party went ahead with it despite Police permission being denied. It gave the interim direction in response to PILs that were filed opposing the rally. This was done after the Tamil Nadu government counsel informed that Police have denied permission, as there was no firm commitment from the organizers on taking responsibility in case of any violence and damage to property.

Right from the time, it was being debated in parliament the DMK and their allies’ parliamentarians had expressed their vehement opposition to the then CAB. After the bill was passed the DMK went on the offensive against the AIADMK government in Tamil Nadu, whose MPs along with those of PMK had voted in favour of the bill in the Rajya Sabha (Upper house of parliament). The AIAMDK and PMK are allies of the BJP and had joined the NDA ahead of the 2019 General Elections.

“The Indian Constitution is secular and the government cannot enact any law that will discriminate against people based on religion. By excluding the Sri Lankan Tamils, the BJP has shown that it is not only against the Muslims but also the Sri Lankan Tamils” Stalin said during an agitation in Kanchipuram district in the previous week.

However, on various occasions, Tamil Nadu Chief Minister Edappadi K Palaniswami had assured the people that the AIADMK would ensure that no harm would occur to the minority communities and how the CAA was not a threat to Indian citizens, irrespective of their religion. In a statement, he also mentioned that rumours were being spread across the Muslim community and urged the citizens to not fall for false propaganda. The statement also emphasized that the Chief Minister had personally met the Prime Minister and Home Minister to provide dual citizenship for Sri Lankan Tamils.

The CAB (it was known as Citizenship Amendment Bill before being passed) has been a talking point in India, ever since it was tabled in the Parliament over three weeks ago. The CAA grants citizenship to refugees from Hindu, Christian, Sikh, Buddhist and Parsi communities fleeing religious persecution from Pakistan, Afghanistan, and Bangladesh, who arrived in India until December 31, 2014. After it was passed by both houses of Parliament and received the assent of the President of India, the bill has seen opposition from students, celebrities, academicians and opposition parties, besides protests that occurred in various parts of the country have turned violent.