AIADMK leadership writes to cadres, urges them to join hands and safeguard party 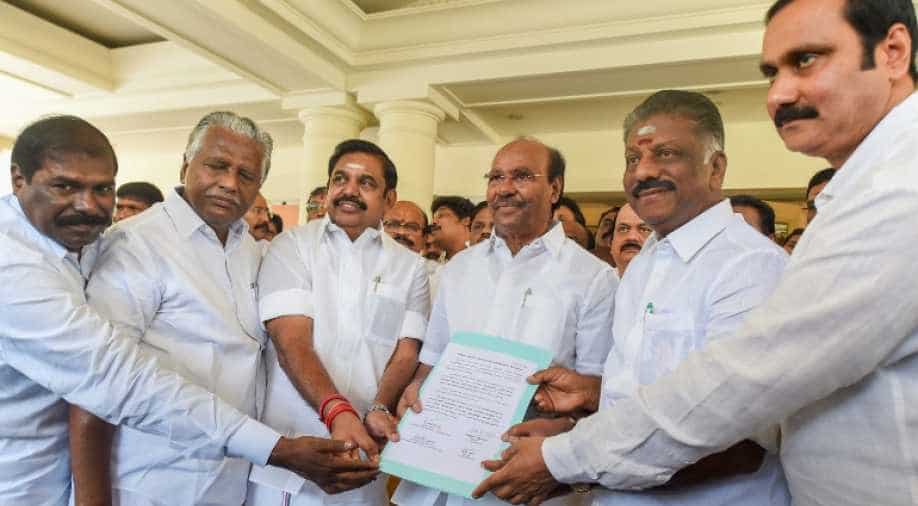 In an attempt to downplay the controversy, Chief Minister Palaniswami termed all the AIADMK cadre and functionaries as leaders and brushed off concerns about the leadership crisis.

A day after an AIADMK MLA VV Rajan Chellappa made a strong pitch for a single charismatic leader to steer the party, the party leadership has written a letter to party cadre urging them to remain disciplined, united and follow the political lessons imparted by their late leaders and former Chief Ministers MG Ramachandran and J Jayalalithaa.

Speaking to reporters at Madurai, Chellappa said, three weeks after the election results and the dismal performance the party high command was yet to convene a general council meeting and analyse the reasons behind the rout. The AIADMK currently has two top posts of coordinator and co-coordinator held by Deputy Chief Minister O Panneerselvam and Chief Minister Edappadi K Palaniswami respectively.

This public call for a single charismatic leader is on the lines of the practice that was prevalent during the MGR and Jayalalithaa years, where they held the top post of party General Secretary. The MLA and senior party leader refrained from naming anyone for the top post, only saying that any leader with influence among the people, charisma and who is recognised by Amma (Jayalalithaa) should come into power.

He also asserted that the AIADMK cannot be defeated by the DMK and no ruling MLA would switch to the opposite camp, adding that he aired his views only to strengthen the party.

In an attempt to downplay the controversy, Chief Minister Palaniswami termed all the AIADMK cadre and functionaries as leaders and brushed off concerns about the leadership crisis.

In the letter issued to the party cadre and functionaries, the leadership urged them to exercise caution while going public with their opinions regarding the goings-on in the party, the debacle in the elections and organisational matters of the party.

Speaking to WION on the developments, senior journalist and political analyst Sumanth C Raman said, "this letter was most needed as some MLAs have been making indiscreet statements of late ."

On the calls for a single leader and the way ahead for the party he said, “its a recipe for disaster, what is working currently should not be disturbed and for the next six months to one year the EPS-OPS combine must tighten their grip.”

Amid the demands for a singular top leadership and calls for discussing the reasons for the poll rout, AIADMK MLAs, MPs and senior functionaries are expected to meet on Wednesday.

The AIADMK received a drubbing in the recently concluded Lok Sabha Polls, with the party winning only a single seat from the 38 seats across Tamil Nadu, against its 2014 performance where they swept 37 seats.

However, the party which is currently ruling the state managed to bag nine seats in the Assembly bye-polls, hence ruling out the possibility of them being unseated.