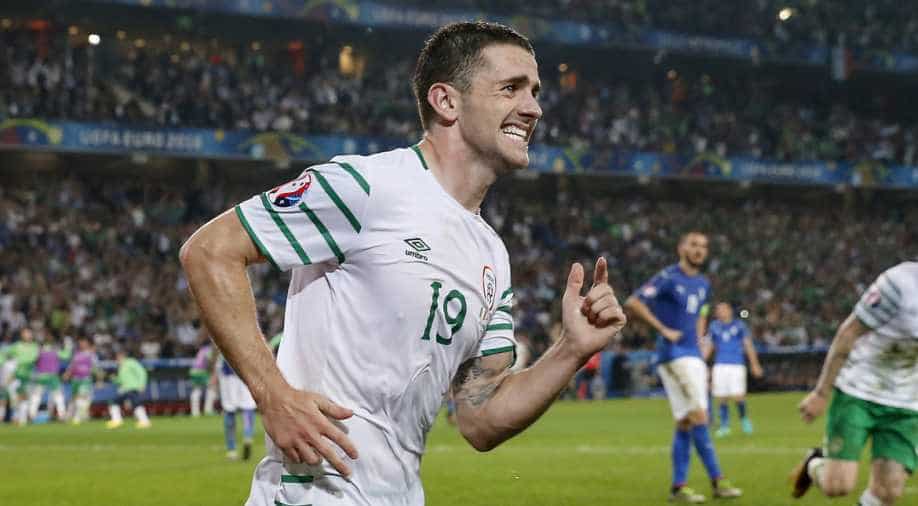 Follow Us
Robbie Brady scored a glorious late winner for Ireland to put them through to the knockout stages of the European Championship for the first time with a 1-0 win over Group E winners Italy.

Brady scored his 85th minute headed goal from a pinpoint cross by his Norwich City clubmate Wes Hoolahan, who had just spurned a golden opportunity to seal the well-deserved victory himself.

It delivered Irish football one of its most famous nights against a second-string Italy side, with the three points securing third place in the group and setting up a last-16 tie against hosts France in Lyon on Sunday.

"It's what dreams are made of. I grew up dreaming about this stage and to go and do it in front of my family is the best feeling in the world," said Brady, who reckoned that scoring the goal felt like "an out of body" experience.

"All applause is for Wes Hoolahan. He put the ball right on my head. I would have done well to miss it. We rode our luck a couple of times, but we got the result in the end. If we stick together like we did tonight, we can take on anyone."

With his team already guaranteed to top the group, Antonio Conte made eight changes, with only Leonardo Bonucci, Andrea Barzagli and Alessandro Florenzi surviving from the side that started against Sweden.

The Irish began like a team on a mission, full back Seamus Coleman thundering into a tackle in the opening seconds to lay down a marker, and plenty of tough challenges from both sides followed.

Ireland almost took an early lead when Jeff Hendrick created some space at the edge of the box and hit a left-footed piledriver that flew just wide of the top corner.

In the 21st minute, Daryl Murphy met Brady's outswinging corner with a powerful header, forcing Salvatore Sirigu to make a flying save and tip the ball over the bar for another corner.

Italy had to wait until just before halftime for their first decent chance, Ciro Immobile dragging his shot just wide after a well-worked short free kick.

Moments later the Irish were denied what looked like a clear penalty when James McClean was pushed in the back by Federico Bernardeschi, but referee Ovidiu Hategan turned down their appeals, leaving coach Martin O'Neill incandescent with rage.

Simone Zaza almost broke the deadlock on a rare Italian foray forward with a fizzing shot after the break, but then Ireland dominated almost the entire second half.

With Italy content to soak up the considerable pressure, the Irish mixed up their play, alternating between long balls and short passes, and set pieces continued to be a potent weapon.

The Italians were not content to simply concede, and Lorenzo Insigne came on in the 75th minute to make his first appearance at the Euros. Within two minutes, he had curled an exquisite shot past Darren Randolph only to see it come back off the post.

With 13 minutes left and the Irish tiring, O'Neill threw on playmaker Hoolahan, who netted the goal in Ireland's 1-1 draw with Sweden, in a last-gasp effort to finally unlock the Italian defence.

He missed a glorious chance to put his side ahead minutes later, shooting straight at Sirigu when he got through one-on-one and it looked as if Ireland were heading for elimination.

Yet he made amends soon after, crossing for Brady to head Ireland into the lead and send the Irish fans into raptures.

When Hategan sounded the final whistle, there were wild celebrations from players, coaching staff and fans alike with Ireland's Euro dream still very much alive.

"We stuck at it and put in a great performance," Brady said. "In the end we got the result we deserved. Roll on France!"