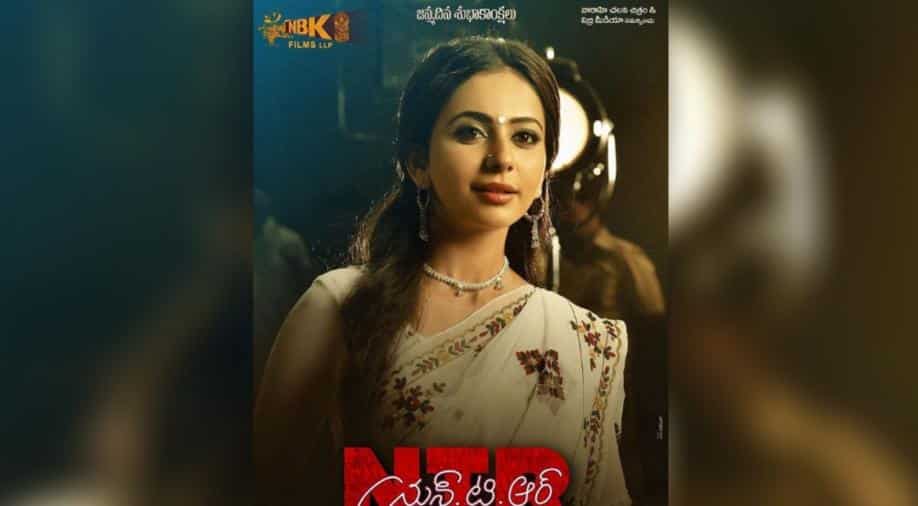 Work on NTR biopic is underway as actress Rakul Preet Singh who has been roped to play Sridevi posted the first look of her character in the film. We must say, she doesn’t disappoint!

Rakul took to Instagram to share the first look of her as Sridevi. Wearing a traditional sari and centre-parted hairdo (that Sridevi used to carry effortlessly in her films), Rakul will remind you of legendary actress Sridevi.

For those who are unaware, NTR and Sridevi acted in a total of 14 films together. Rakul’s role as Sridevi in the film is limited to a cameo appearance with a song and some scenes.

Talking about her role, Rakul said, “This is going to be the most challenging character I’ve played so far because Srideviji is a legend. She was and is still loved by millions. I have been a big fan and recreating the diva on screen for the first time is a big responsibility. I hope I can do justice to it. The makers have full faith in me and I hope I can live up to it.”

Presenting first look of #sridevigaru in #ntrbiopic !! ❤️ hope you like it !

Other Bollywood actors who are playing an important role in the film include Vidya Balan and the ‘Baahubali’ star Rana Daggubati. Rana will be seen playing Andhra Pradesh Chief Minister N Chandrababu Naidu in the biopic on Telugu actor-turned-politician Nandamuri Taraka Rama Rao (NTR).

The biopic will be made in Telugu, Tamil and Hindi since NTR was a popular figure across India.

It is jointly being produced by Balakrishna, Vishnu Induri and Sai Korrapati. The film’s music is composed by MM Keeravani.