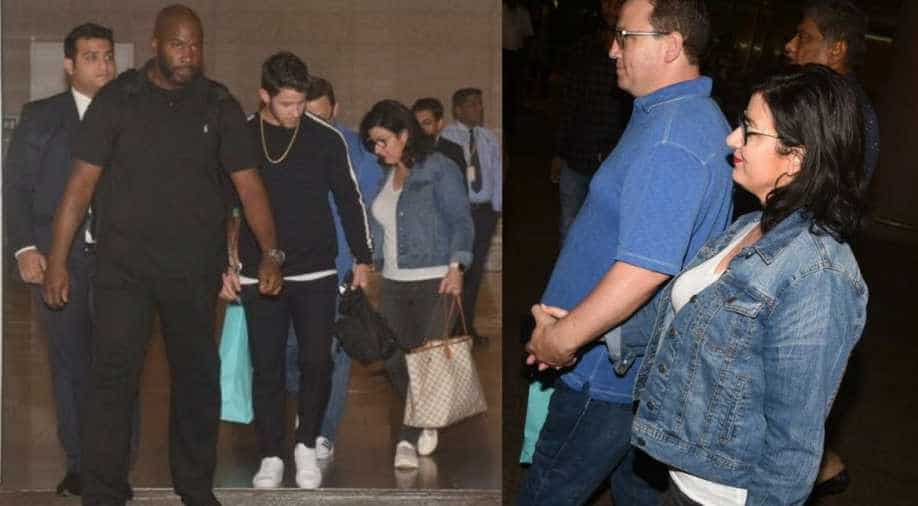 Nick Jonas has reached India with parents in tow -- almost confirming the news that Nick and Priyanka Chopra will host an engagement bash for her friends in Bollywood this weekend.

The American singer, 25, was spotted arriving at the Mumbai airport on Thursday evening with mother Denise and father Kevin Jonas Sr. The parents, as they left the airport, had a huge Tiffany & Co. bag with them -- hinting at more gifts for Priyanka? It’s reported that Priyanka said yes to Nick in London where he proposed to her with a Tiffany diamond ring. Apparently, he shut down their London store to buy an engagement ring for her.

This is the first time when Nick’s parents are coming to India. Reportedly, they wanted to meet his fiance before their wedding.

According to a report published in a US-based daily, the two will tie the knot in October. “It’s going to be the first time that their families intermingle and get to know each other. It’s a tradition for them to meet before the wedding and Priyanka’s family insisted on hosting the Jonas family in their country."

Priyanka is now hosting an engagement bash where we hope, she will spill the beans on their relationship and make it official. She is currently shooting for 'The Sky Is Pink' in India.

According to a report published in US magazine, “They are so happy,” said a source close to the couple, that began dating in May and attended the 2017 Met Gala together.

Another source was quoted: “His friends and family have never seen him like this, and they’re all really excited for him. He’s definitely very serious about her.”

This is Nick’s second visit to India, as he first attended Mukesh Ambani’s son’s post-engagement bash in Mumbai with Priyanka.

It’s said that when Priyanka and Nick tie the knot in October, it will be a desi wedding for them, according to Indian traditions and customs.