Marie Antoinette's jewels up for auction in Geneva 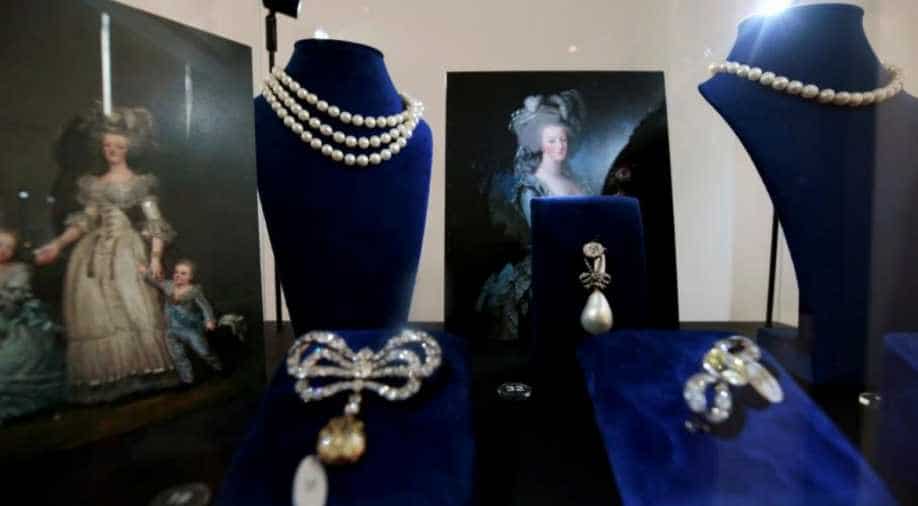 Jewels once belonging to Queen Marie Antoinette of France are seen at Sotheby's in Dubai, UAE, October 9, 2018. Photograph:( Reuters )

It has been billed as one of the most important royal jewellery auctions in history.

Marie Antoinette's diamonds and pearls, not seen in public for two centuries, go under the hammer in Geneva Wednesday in what has been billed as one of the most important royal jewellery auctions in history.

Ten dazzling treasures that belonged to the ill-fated queen are part of a 100-piece collection, held by the Italian royal House of Bourbon-Parma, being sold by Sotheby's auction house.

Marie Antoinette, the last queen of France before the revolution, was guillotined in Paris in October 1793 at the age of 37.

He described Wednesday's auction at the luxurious Mandarin Oriental Hotel on the Shores of Lake Geneva as "the sale of the 21st Century".

Jaw-dropping prices have been paid for precious gems at recent Geneva jewel auctions, with some rare, flawless coloured diamonds fetching tens of millions of dollars each.

Marie Antoinette's pieces are not expected to approach those heights, but buyers may still part with hundreds of thousands of dollars to own a piece of history.

"It is one of the most important royal jewellery collections ever to appear on the market and each and every jewel is absolutely imbued with history," said Daniela Mascetti, deputy chair of Sotheby's jewellery in Europe.

The jewels have followed a winding path highlighting European power dynamics in the 18th and 19th centuries.

According to accounts written by the queen's lady in waiting, Madame Campan, Marie Antoinette spent an entire evening in the Tuileries Palace wrapping all her diamonds, rubies and pearls in cotton and enclosing them in a wooden chest.

They were sent to Brussels, governed by her sister Archduchess Marie-Christine, before being sent on to the French queen's native Austria, and into the safe-keeping of her nephew, the emperor.

In 1792, the royal family was imprisoned in Paris. The king and queen were executed the next year, and their 10-year-old son Louis XVII died in captivity.

Only their daughter, Marie Therese of France, survived. She was sent to Austria in 1796, where she was given her mother's jewels.

She had no children herself, but passed on the jewels to her niece and adopted daughter, Louise of France, Duchess of Parma, who in turn left them to her son, Robert I (1848-1907), the last ruling Duke of Parma.

They have been privately owned by relatives ever since.