Emily Ratajkowski is a work in progress 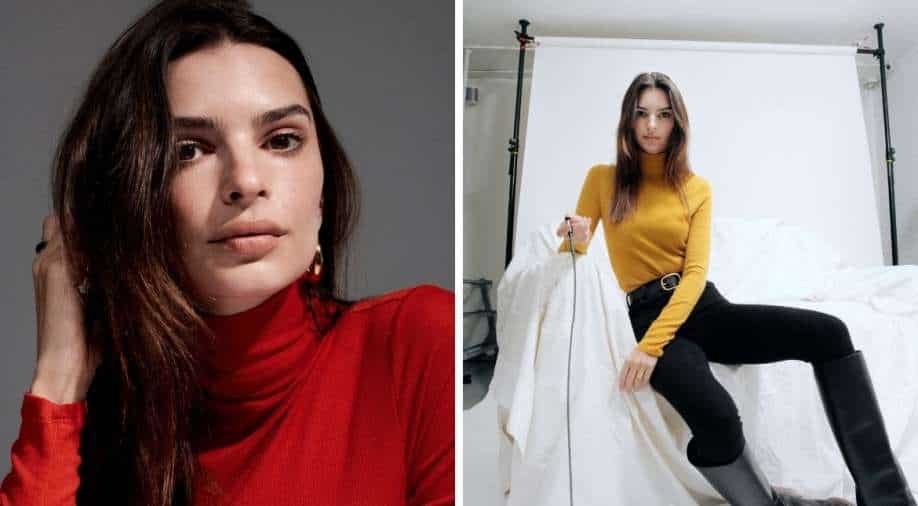 In her book, she articulates the pressures she’s felt to defer to men, from dancing in a nude thong, to dating a boy who forced himself on her in high school, to playing the “model wife” at a Hollywood party.

On a September morning in SoHo, the airy, light-filled Inamorata office was filled with women. Beside racks of bathing suits and “city sets” (matching crew necks and bike shorts bearing versions of the logo also found on the hand towels in the bathroom), they sat around communal tables, cooing over a baby.

Sylvester is the 8-month-old son of the apparel company’s founder and chief executive, Emily Ratajkowski. He and her giant Husky mix, Colombo, were the only boys around.

“As you see, you’re in my safe space,” Ratajkowski said, sitting on a pink velvet couch facing the room where her team was tending to her child. “Having your own company, you’re the one who decides what the images are of your body that are going out in the world.”

Control is big for the supermodel. Ever since 2013, when she became famous for dancing seminude in Robin Thicke’s “Blurred Lines” music video, images of Ratajkowski have diffused across the internet. From David Fincher’s “Gone Girl” to paparazzi photos to fashion ads to her own social media posts, her face is so ubiquitous she said she even gets tagged in tattoos.

In 2018, when she was at the height of a modeling career she’d thought would be temporary (she dropped out of UCLA in 2010 and needed the money), her mother, Kathleen Balgley, a former English professor, was diagnosed with amyloidosis, a chronic, abnormal protein buildup in her hands.

Around then, Ratajkowski said, “I felt like something was really missing.” Alone in Los Angeles while her husband, movie producer Sebastian Bear-McClard, was working in New York, Ratajkowski began to write.

The resulting essays, collected in “My Body,” out from Metropolitan Books on Nov. 9, reveal a person whose politics and sense of self are very much in progress.

“They were written to try to figure out what I believed,” she said.

In the essay “Blurred Lines,” Ratajkowski returns to the set of a video that was criticized as degrading and even “rape-y,” and considers misogyny and her role in it. Back then she was 21 and found the experience “empowering,” she writes, a chance to embrace her sexuality on camera and use it to her advantage.

“Whether you’re wearing a burqa or a bikini,” she said, “we’re operating in the very specific confines of a cis-hetero, patriarchal, capitalistic world.” (She added: “I always freak people out when I use words like that, just as far as it’s, like, a little obnoxious.”)

It may not be especially radical to explore the power imbalance between the beholder and beheld. But Ratajkowski, who has worked to amass a social media following in the tens of millions, comes to the subject with an unusually influential voice.

“It’s almost like she’s a secret agent who infiltrated the beauty industry, reached its heights, and is now telling us what it’s like in unsparing terms,” said Michael Schulman, the writer who moderated a conversation between Ratajkowski and comedian Amy Schumer at The New Yorker Festival last month.

But the industry has also infiltrated the secret agent. In the essay “Bc Hello Halle Berry,” Ratajkowski has an existential crisis about being paid to post a picture of her butt on a free vacation in the Maldives, writing, “I wanted to be able to have my Instagram hustle, selling bikinis and whatever else, while also being respected for my ideas and politics and well, everything besides my body.” She writes that her hypocrisy gives her a headache.

To earn that respect, Ratajkowski did her homework. In December 2019, she contacted author Stephanie Danler (“Sweetbitter,” “Stray”) asking for advice, and they became friends.

“She really taught herself how to write that book,” Danler said. “She just read nothing but nonfiction, book after book, in a kind of self-made MFA program.”

Among Ratajkowski’s influences: Leslie Jamison’s “The Empathy Exams” (“obviously”), Lacy Johnson’s “The Reckonings” (“one of my favorite books and nobody knows it, which I just think is crazy”), Alexander Chee’s “How to Write an Autobiographical Novel,” Lisa Taddeo’s “Three Women.”

Sara Bershtel, her editor at Metropolitan, said they signed a deal in the fall of 2020, shortly after The Cut published “Buying Myself Back,” an essay that is included in the book. In it, Ratajkowski recounted moments when she had seen photos and images of her bought, sold and shared without her consent, including in one case by a photographer she accused of sexual assault. It was the magazine’s most-read piece of the year.

“I have learned that my image, my reflection, is not my own,” she wrote.

The essay resulted in an outpouring of support. Even so, as she prepares for the release of her book, Ratajkowski insists her name is a handicap.

“I’ve internalized the way that I have not been taken seriously, and just been treated like a body,” she said. If you’re a celebrity who wants to write a book, she added, “what happens is a lot of doors open for you, but not in the right way.”

Ratajkowski said she asked Metropolitan to publicize “My Body” as comparable to “Misfits,” the memoir by Emmy-winning screenwriter Michaela Coel.

“I love how that happened for her with ‘I May Destroy You,’ I think it was so interesting, it started those conversations, which is really all I want,” Ratajkowski said. “It was weird to realize, oh, it’s not going to be the same for me.”

In her book, she articulates the pressures she’s felt to defer to men, from dancing in a nude thong for Thicke and Pharrell, to dating a boy who forced himself on her in high school (“I wish someone had explained to me that I owed him nothing”), to playing the “model wife” at a party for Bear-McClard in Hollywood, where she was grabbed and insulted by his “boys’ club” colleagues.

But “one takeaway I hope people know about this book is that it isn’t just, Oh, I’ve been so hurt, and another #MeToo story,” she said. “This is a book about capitalism. I just have an asset that I traded on that was specific, and I think most women do. Even if it’s in your marriage.”

She doesn’t plan to quit modeling, because she likes it, and because “I want to continue making money.” Besides, even if she did quit, she said, “I’m still going to be connected to celebrity, because we all are.”

Ratajkowski knows she is in the minority of models — and authors — who have the means to control the narrative as she does: to mint a self-portrait as an NFT and sell it at auction for $175,000, which she did in May; to forgo child care “because I like doing it”; to trademark her own brand. And yet, sending a book out into the world also requires letting go.

“It’s scary that somebody is just going to pull a quote and be like, this is what she said about this juicy bit of gossip,” Ratajkowski said, correctly predicting a Times of London headline that ran just weeks later: “Blurred Lines singer Robin Thicke assaulted me on set, says Emily Ratajkowski.” (Representatives for Thicke didn’t respond to requests for comment.)

Thicke is one plot point of many in a narrative that will inevitably be mined for clickbait.

“This is not a book where I’m trying to cancel the men I’ve known in my life,” she said. “I’m trying to defy expectations and also talk about nuance — in my identity, but also just in life, and in political beliefs. And this is not a nuanced time.”

Kanye West: This Thanksgiving, I'm thankful for the family my wife has given me