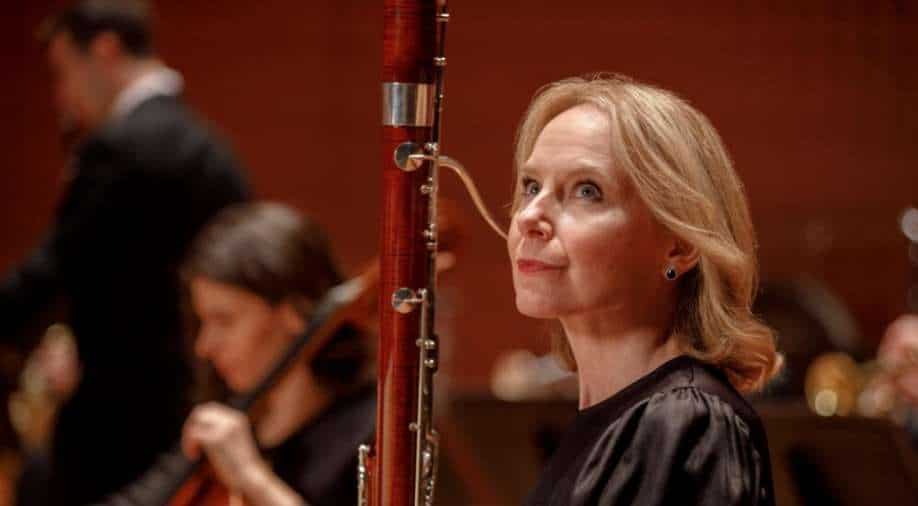 "I was watching “Fleabag,” and the nephew character — I was like, “The bassoon! He’s playing the bassoon, oh my God!” I was so excited," Amy Ryan told The New York Times.

This interview contains major spoilers from the season one finale of “Only Murders in the Building.”

“Never trust a bassoonist,” Amy Ryan said with a laugh.

She would be the one to know: Ryan plays one in the first season of the whodunit comedy “Only Murders in the Building,” the finale of which arrived to Hulu on Tuesday. And that bassoonist, it turns out, was the maniac behind the central murder of the show’s first season. (The series has already been renewed for a second.)

After numerous twists and red herrings — at one point, musician Sting is suspected — Jan’s jig is up after hard-luck Broadway producer Oliver Putnam (Martin Short) realizes that what he thought was a sex toy found in murder victim Tim Kono’s apartment is actually … a bassoon cleaner. Kono’s older neighbor, it seems, was also his former lover.

But she’s not going down before she takes her new flame, washed-up former TV star Charles-Haden Savage (Steve Martin), down with her — by way of a handkerchief laced with poison.

“I want you to know this is definitely one of my rougher breakups, Charles,” she coos as she slips a couch pillow under his head after watching him slump to the floor. “I really did fall in love with you.”

It is, of course, not the end for Charles, who is discovered by Oliver and their young partner in true-crime podcasting, Mabel (Selena Gomez). With Charles in a stroller, the three of them manage to reach the boiler room just in time to prevent Jan from gassing the whole building. Then they go to get Charles’ stomach pumped.

Ryan’s role as the cunning murderer down the hall is a big departure from what is perhaps her best-known character, dorky human resources representative Holly Flax on “The Office.” But the actress has tackled her share of tough-gal roles before, including Baltimore police Officer Beadie Russell on “The Wire” and hardened welfare mother in “Gone Baby Gone,” which earned her an Oscar nomination. She has also had a notable Broadway career, with Tony nominations for her roles in the 2000 revival of “Uncle Vanya” and the 2005 revival of “A Streetcar Named Desire.”

In a recent phone conversation from her home in New York, she discussed the inspirations for her character on “Only Murders,” mastering the bassoon (sort of) and working with Martin and Short. These are edited excerpts.

Q: Did you know before you took the role that Jan was the murderer? Or one of them at least?

A: Yes. Before I joined, (series co-creator) John Hoffman gave me the outline of the whole series — he didn’t have scripts fully written yet — and shared that I was the murderer.
Q: Did you believe she was capable of murder?

A: There was an article in The New York Times about a woman — a New Yorker — who went off into a QAnon kind of world from writing comedy. And the dial just turned so slowly for her, for her reality to bend. And I thought, “That could be Jan, too.” Living alone on the Upper West Side, losing your friends one by one. Not that QAnon people are murderers, but just someone not dealing with reality — I thought that could be her way in.

Q: Was Kono her first victim?

A: No, she’s definitely done it before. In that last scene with Steve when he’s on the floor and she recognizes all the signs — oh, yeah, there goes the slurring, oh, yep, you’re right on target — I think Tim Kono is not her first. (Laughs.)

Q: Is she a psychopath?

A: I know someone who committed murder — they’re not a close friend — but they snapped. I don’t know what pushes someone closer and closer and closer. And that was a one-time thing, so what is a person who repeats? I imagine they must be a sociopath. So I think that is Jan.

Q: Does she really love Charles? Or is it all just an act?

A: She knows she’s lying when she’s telling him, “I’m first chair and I have a big performance tonight,” but when she said that, she believed it. I believe, in that moment, she does love Charles. She does.

Q: The fact that she props his head up on a pillow after she poisons him is twistedly romantic.

A: Yeah. (Laughs.) Charles is probably the most special of the group. He was probably the first one to tell her he loved her back.

Q: You have such an ability to manipulate your facial expressions, from the slightest narrowing of your eyes to the tensing of your cheekbones. Do you look in a mirror to practice?

A: (Laughs.) No. I just haven’t done anything to alter my face — I’ve never been injected with anything. When I was a kid, I used to look in the mirror and practice when I thought I wanted to be an actor, but not now, no.

Q: Did you get a kick out of that all-black power ensemble you’re wearing in the final confrontation scene?

A: Oh my God, I love it. They gave me that outfit when I left. I don’t know if I can really wear it now — maybe around the house, it might spook people. I love the clothes that they put Jan in. We kept finding shoulders that were femininely cut — lots of puffy shoulders. When I filmed this series last January through April, I came out of sweatpants and got to wear all those clothes, which was such a delight.

Q: How comfortable were you shooting a gun?

A: I shot a gun quite a bunch on (2016 action comedy) “Central Intelligence,” which was not fun. Even fake guns, shooting blanks — the recoil, the vibrations, and you’re doing it for six hours a day. I don’t like it; I don’t like guns. The violence of having to put a gun in Tim’s mouth — that was horrible to do. We’re playing make-believe, but it’s still such a violent gesture, and you want to just get it over quickly. I’m not in full character in that moment where I’m murderous and full of hate. I’m the actor who’s making sure I’m not pulling his necktie too tight to choke him, and that I’m not chipping his tooth when I put this gun in his mouth.

Q: Did you learn to play the bassoon?

A: There wasn’t time, but I worked with this wonderful musician, Jackie Henderson. I had her record some of the pieces that Jan plays in the show, and then I would study the video of Jackie — when and where she took a breath, and her finger movements on the keys. I would hit the keys and play along with the video, and by the time we filmed it, I would do it at the rhythm like 3-2-1-2-2-3-3-2-2-1, over my fingers. So it was just kind of mimicry.

Q: I’m sure the bassoonists who are watching the show feel seen.

A: I was watching “Fleabag,” and the nephew character — I was like, “The bassoon! He’s playing the bassoon, oh my God!” I was so excited.

Q: Are you a true-crime person?

A: I’m not a true-crime fan — I don’t have the patience for it. I’m not a puzzle solver. I want to know right away.

Q: Do you have any fun stories about working with Martin and Short?

A: I know all Steve Martin’s films; I listened to his albums when I was a kid. My sense of comedy was like, “Oh, I should just try to repeat his.” So there is a moment that I’m there on set, and I can’t shed my 12-year-old self. It’s weird — how do you just be present, and now this just happens to be the actor that you work with, and his name is Steve Martin, and no, that’s not the person who inspired you as a kid? You can’t just geek out on him, but it’s hard.

And the same with Martin Short. I also knew it’s best to keep quiet — just let them do their thing; don’t interject, don’t try to play along when we’re off set. Their banter is so brilliant, and they’re constantly writing and working. You’re just there, and these gems are thrown about the stage. It’s remarkable how fast their brains work.

A: Maybe Jan will be back, I’m not sure — someone will have to come bring her a cake in jail, I suppose. Jan can be in a cell with Selena or something, lose her mind.

Q: Of course, she’ll find a way to get her bassoon back and drive all the other prisoners crazy.

A: That would be amazing.