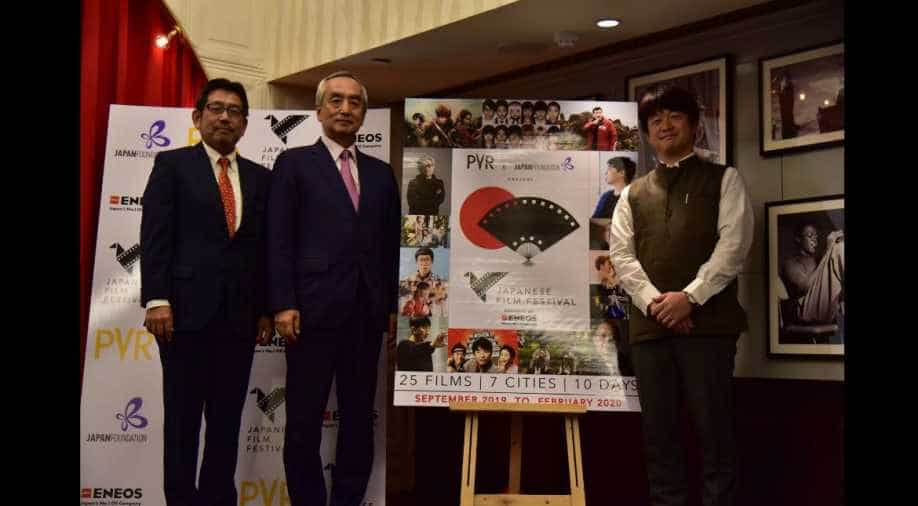 Japan Foundation recently announced the launch of the third edition of Japanese Film Festival in India in partnership with PVR Cinemas as they bring a selection of 25 films for screenings in different cities of the country.

Announcing a multi-city tour in India starting September 27 for the next six months, Japan’s Ambassador to India, Kenji Hiramatsu and Director-General of Japan Foundation, Kaoru Miyamoto spoke to WION about an increasing demand of international films, a long-standing culture of exchange of arts and cinema between India and Japan, Rajinikanth and popular culture.

Kaoru Miyamoto explained how the panel at Japan Foundation made a selection of 25 films out of 30 to 40 that was picked for its story, message, mass recognition and more such parameters. He said, “While making the selection, we chose to get a variety for the Indian audience. We made sure that these were films from different genres.” True to that, the selected films are spread over genres like romance, drama, comedy from contemporary Japanese cinema, including feature, award-winning and anime films.

Japan’s Ambassador to India, Kenji Hiramatsu at the inauguration said, "From the films which the Japan Foundation has brought to you this year, you will discover what Japanese people laugh at, what they are moved by, and what they like, etc. I hope that, through these interesting stories, you will feel closer to Japan and the Japanese people. I am sure this film festival will help further consolidate the friendship between the people of our two countries.”

On the cross-cultural exchange that has facilitated these ties between the countries, Kaoru said, “Both countries’ prime ministers are visiting each other. Indian people’s interest in Japan, culture and films is on an all-time high while at the same time Indian films are doing great business. The Japan Film Festival is (thus) getting bigger.”

He then continued with an example of a Japanese film ‘Weathering With You’ that is now coming to India on October 11, 2019, after an Indian Anime Movement started a petition in April this year, urging makers to release it in the subcontinent.

He said, “It encouraged people in Japan to respond to that. There is a lot of interest on both sides, it opens a space for us to create something together. Japanese people also want to see a lot of Indian films.”

Rajinikanth and the common theme between successful Indian-Japanese films

From reading about the iconic filmmaker Akira Kurosawa and seeing his films in chapters of golden years of world cinema in India to a massive fan following for South Indian superstar Rajinikanth in Japan, Kaoru admitted there was a lot that the two countries share a passion for. He spoke of the inherent love for Indian cinema among Japanese masses like the KS Ravikumar directed ‘Muthu’ starring Rajini becoming a cult classic, so much so that it was restored to 4K resolution and was re-released in Tokyo last year.

Ambassador Kenji on the common theme among films that work in both the countries said, “Deep, personal stories about families and how they evolve and love each other are extremely popular. A lot of Japanese films are about family and relationships. I know that a lot of Indian films also have a lot dealing with family, love and children. Those kinds of stories are very popular in Japanese films.”

He added, “I think the common theme between Indian and Japanese films are family issues. Last year’s famous Japanese film, ‘Shoplifters’ was about a broken family that held on to each other in difficult times.”

Japanese culture got an entry into mainstream Indian consumption via the hugely successful anime TV shows like ‘Shinchan’, ‘Dragon Ball-Z’, ‘Doraemon’ and the likes.

On what the filmmakers need to do to tap into a new market, Kaoru said, “If we want more filmmakers to get inside Indian market then that is the first step, to get the children to watch it and to make content that even adults enjoy. Initially, for Shinchan, the parents didn’t like it but when it came in the form of films, it wasn’t that bad. He (Shinchan) became better, the story became more relatable,” and added jokingly, “In that aspect, I should speak to filmmakers to make more such content.”