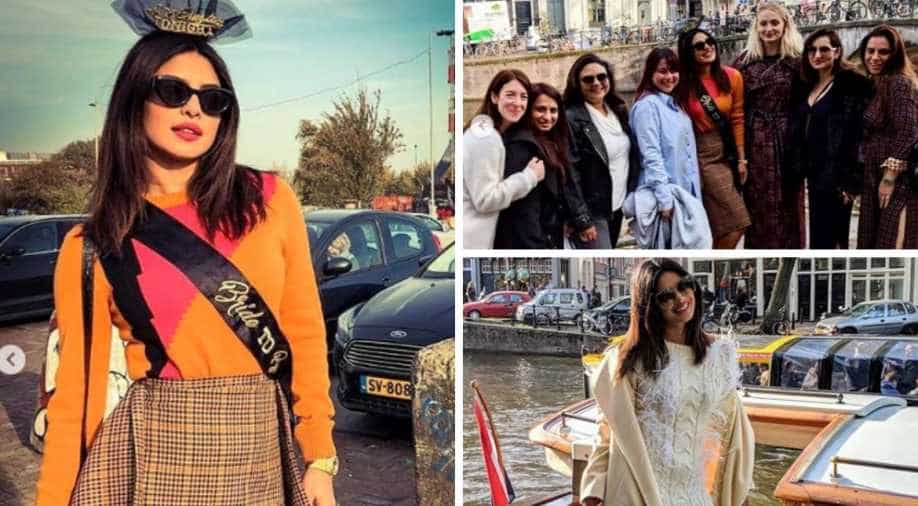 Priyanka Chopra is living her life to the fullest. After throwing a bridal shower in Tiffany & Co's Blue Box Cafe and having over her friends from Hollywood to cherish these good times with her, the star is now off on her bachelorette trip to Amsterdam.

Her trip is an all-girls invited vacay or so it seems with her close friends including future sister-in-law Sophie Turner (‘Game of Thrones’ fame). Taking to Instagram, Priyanka shared a few pictures from her getaway as she looks stunning in different attires, obviously having a lot of fun.

In the firsts of many, she posed in white sweater paired with matching knee-length socks and snake-printed boots with a soft jacket thrown over it. She took her girls on a cruise as her friends posted envious images and videos of the inside.

The star then changed into a yellow sweater and check skirt. She completed the look with a cute hat that reads: “I’m single”.

A day in the life of... #bachelorette

In another video, Priyanka is seen carrying Sophie after a girl drinking-out night. She can be heard saying that apparently, this is what you gotta do for sister-in-law as feet hurt badly after being in heels for long.

Priyanka makes me wanna go out, get a boy and have a bachelorette party like this with your dream girl squad 😭🔥(🎥: @elizabethchambers)

Priyanka Chopra is engaged to Nick Jonas as he proposed her in London with a Tiffany ring. They then came to India to get engaged according to Indian rituals and celebrate with Bollywood friends.

It is said that Priyanka might tie the knot with Nick Jonas on December 2 in a heritage palace in Jodhpur city of Rajasthan.