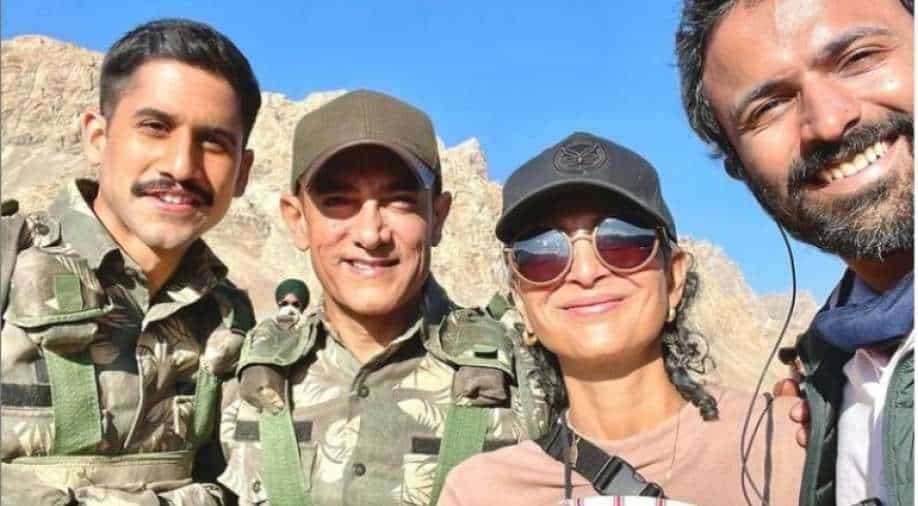 Telugu actor Naga Chaitanya is all set to make his Bollywood debut with Aamir Khan starrer 'Laal Singh Chaddha'. The actor joined the team on Friday.

Naga, who has a massive fan base in Tollywood, took to his Instagram handle and shared a picture from the sets of the upcoming movie in Ladakh.In the picture, Naga is seen posing with Aamir, his ex-wife and producer of the film Kiran Rao and director Advait Chandan. Both the actors who will soon share screen space are seen dressed in the Indian Army uniform.

Aamir's upcoming film 'Laal Singh Chaddha' has been making headlines ever since it was announced and movie buffs will soon get to witness the actor`s magic on screen. The team is currently shooting for the final schedule of the film in Kargil.

Apart from playing the lead character in the upcoming film, Aamir is also producing the project along with his ex-wife Kiran.A source close to the production earlier said, "Aamir has made Laal Singh Chaddha his passion. What`s more, he`s even looking into the edit and backend work of the film himself. He`s completely focused on the film and has decided to switch off his mobile phone until the film hits the theatres, enabling him to concentrate on the film hundred per cent."

'Laal Singh Chaddha' reunites Aamir and Kareena Kapoor Khan, who last worked together in '3 Idiots'. Apart from Kareena, Mona Singh will also be seen in the movie.Adapted by Atul Kulkarni and directed by Advait Chandan, 'Laal Singh Chaddha' is an official Hindi remake of Robert Zemeckis` Oscar Award-winning 1994 film `Forrest Gump`, that featured Hollywood star Tom Hanks in the titular role.`Laal Singh Chaddha` will reportedly unfold some of India`s historic events as seen through the eyes of a man with a low IQ.

Reportedly, Shah Rukh Khan and Salman Khan will appear in cameo roles in the upcoming movie.Being touted as the most anticipated release of this year, the upcoming movie is slated to hit the big screens on Christmas.