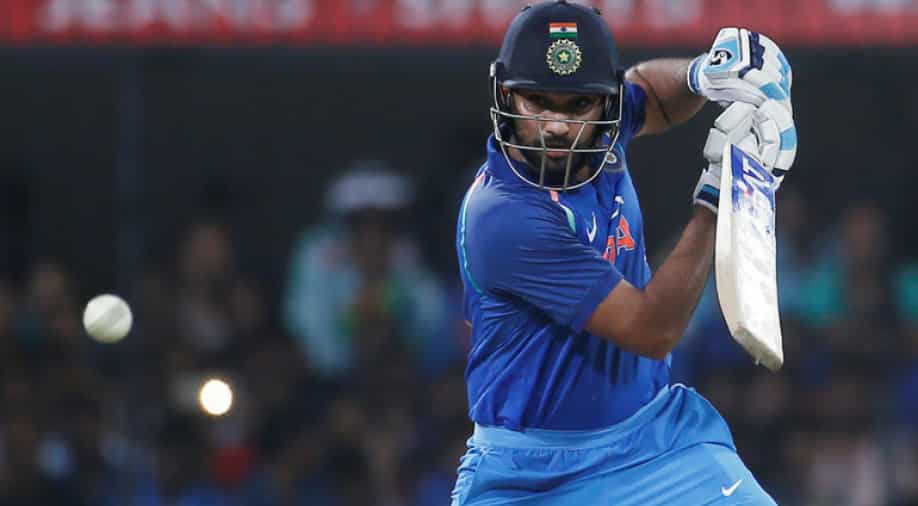 Sharma finished as the leading scorer in the five-match ODI series against Australia which India won 4-1. Photograph:( Reuters )

Flamboyant opener Rohit Sharma, who finished as the leading scorer in the five-match ODI series against Australia which India won 4-1 on Sunday, has moved up four places to reach the fifth position in the ICC ODI Player Rankings.

Sharma's 296 runs in the series, which included a brilliant 125 in the last match in Nagpur, contributed significantly to India's convincing victory over the Steve Smith-led side that helped grab the No.1 position in the ICC ODI Team Rankings.

The Mumbaikar is now on a career-best 790 rating points but his highest ranking has been third, which he attained in February 2016.

His opening partner Ajinkya Rahane has moved up four places to reach 24th position while Australia's opening pair of Aaron Finch and David Warner have proved more prolific and the results show in the latest rankings that also take into account the five-match series in England which the home side won 4-0 against the West Indies.

Finch has gained nine slots to reach 17th position while Warner has closed in on No. 1 ranked Virat Kohli, bridging the pre-series gap of 26 points to just 12 points as he has moved to 865 points.

In the rankings for bowlers, South Africa leg-spinner Imran Tahir has regained the top spot after Australia pace bowler Josh Hazlewood missed the India series due to a side strain and lost 18 points in the process. Tahir is now just four points ahead of Hazlewood at 718 points.

In other movements, India's left-arm spinner Akshar Patel has reached a career-best seventh position after moving up three places while wrist spinners Yuzvendra Chahal (up 24 places to 75th) and Kuldeep Yadav (up nine places to 80th) have also moved northwards.

Other bowlers to move up include Australia's Nathan Coulter-Nile (up 49 places to a career-best 44th position) and Pat Cummins (up seven places to 21st), and England's Liam Plunkett (up three places to 10th) and Adil Rashid (up four places to 12th).

In the list of all-rounders led by Bangladesh's Shakib Al Hasan, England's Ben Stokes has moved into the top five.