In Japan, the business of watching whales overshadows resumption of hunt 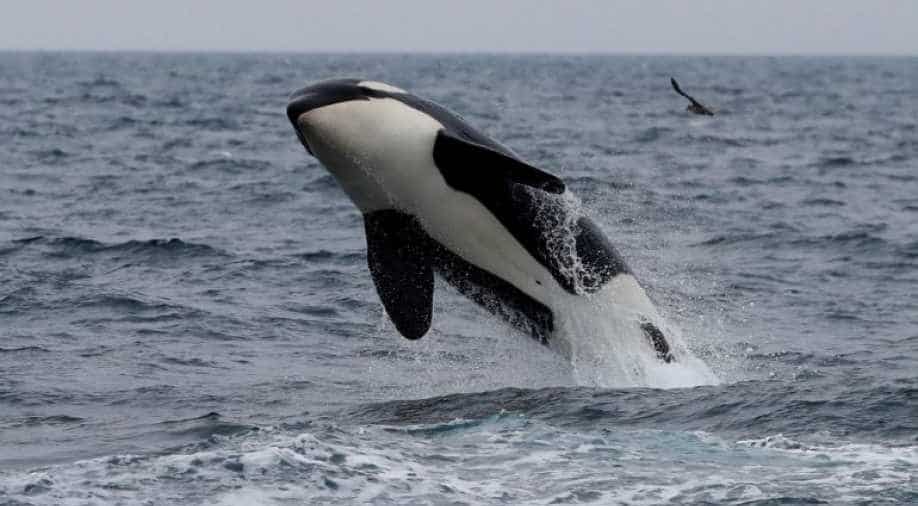 In Kushiro, just 160 kilometres south of Rausu, where the four dozen people laughed and cheered, boats were setting off on Japan's first commercial whale hunt in 31 years.

People packed the decks of the Japanese whale-watching boat, screaming in joy as a pod of orcas put on a show, splashing tails at each other, rolling over, and leaping out of the water.

In Kushiro, just 160 kilometres south of Rausu, where the four dozen people laughed and cheered, boats were setting off on Japan's first commercial whale hunt in 31 years.

Killed that day were two minke whales, which the boats in Rausu also search for glimpses of - a situation that whale-watching boat captain Masato Hasegawa confessed had him worried.

"They won't come into this area - it's a national park - or there'd be big trouble," the 57-year-old former pollock fisherman said. "And the whales we saw today, the sperm whales and orcas, aren't things they hunt."

"But we also watch minkes," he added. "If they take a lot in the (nearby) Sea of Okhotsk, we could well see a change, and that would be too bad for whale watching."

Whale-watching is a growing business around Japan, with popular spots from the southern Okinawa islands up to Rausu, a fishing village on the island of Hokkaido, so far north that it's closer to Russia than to Tokyo.

The number of whale watchers around Japan has more than doubled between 1998 and 2015, the latest year for which national data is available. One company in Okinawa had 18,000 customers between January and March this year.

In Rausu, 33,451 people packed tour boats last year for whale and bird watching, up 2,000 from 2017 and more than 9,000 higher than 2016. Many stays in local hotels, eat in local restaurants and buy local products such as sea urchins and seaweed.

"Of the tourist boat business, 65 per cent is whale watching," said Ikuyo Wakabayashi, executive director of the Shiretoko Rausu Tourism Association, who says the numbers grow substantially each year.

"You don't just see one type of whale here, you see lots of them," she said. "Whale-watching is a huge tourist resource for Rausu and this will continue, I hope."

Wakabayashi was drawn to Rausu by whale-watching; a native of the western city of Osaka, she fell in love with the area after three trips there to see orcas.

"I thought this was an incredible place," she said. "Winters are tough, but it's so beautiful."

Hasegawa, who says he has a waiting list of customers in high season, has ordered a second boat.

"Right now, the lifestyle we have is good," Hasegawa said. "Better than it would have been with fishing."

The five whaling vessels moored at Kushiro port on Sunday, the night before the hunt resumed, were well-used and well-maintained. Crew members came and went, carrying groceries or towels, heading for a public bath.

Barely 300 people are directly involved with whaling around Japan, and though the government maintains whale meat is an important part of food culture, the amount consumed annually has fallen to only 0.1 per cent of total meat consumption.

Yet Japan, under Prime Minister Shinzo Abe - himself from a whaling district - left the International Whaling Commission (IWC) and returned to commercial whaling on July 1.

Whaling advocates, such as Yoshifumi Kai, head of the Japan Small-type Whaling Association, celebrated the hunt.

"We endured for 31 years, but now it's all worth it," he said in Kushiro on Monday night after the first minkes were brought in to be butchered. "They'll be whaling for a week here, we may have more."

Everybody acknowledges that rebuilding demand could be tough after decades of a whale being a pricey, hard-to-find food. Consumption was widespread after World War Two, when an impoverished Japan needed cheap protein, but fell off after the early 1960s as other meat grew cheaper.

"Japan has so much to eat now that food is thrown out, so we don't expect demand for whale will rise that fast," said Kazuo Yamamura, president of the Japan Whaling Association.

Pro-whaling lawmaker Kiyoshi Ejima said that subsidies were unlikely, but that the government should be careful not to let the industry founder. About 5.1 billion yen ($47.31 million) was budgeted for whaling in 2019.

"If we pull away from our hands too soon, a lot of companies will fail," he added.

"The alternative ... is to just limit the supply of whale meat to some of the major places in Japan that have a good tradition of whale eating," Morishita said, adding that the meat is difficult to thaw and cook.

In areas for which whaling is a tradition, this niche market could promote tourism, which Abe has made a pillar of his economic plan.

"Whale eating in a sense is ideal - it's different, it's well-known, and for better or worse, it's very famous," Morishita said. "Taking advantage of this IWC withdrawal, I think there are business changes that are viable."

For Rausu, on Hokkaido's remote Shiretoko Peninsula, the viable business is whale watching.

Foxes run through the streets of the city's downtown, which clings to a narrow strip of land below mountains and faces the Nemuro Strait. Summer often brings thick fog, while winter storms can leave waist-high drifts.

Though fishing was long Rausu's economic backbone, the industry has taken a hit from declining fish stocks, which locals blame on Russian trawlers and falling prices. The population has dropped by several hundred annually, slipping below 5,000 this year.

Hasegawa, a fourth-generation fisherman, began his tour boat business in 2006. Though the first few years were a struggle, he is now happy with his choice as Rausu's reputation grows globally.

On a recent weekday, customers packed the parking lot at a wharf lined with squid-fishing boats, waiting to board Hasegawa's boat and those of three other companies. Hasegawa's customers came from all over Japan and several foreign countries.

"Today there were more (whale) jumps than usual; it was fantastic," said Kiyoko Ogi, a 47-year-old Tokyo bus driver who's been whale-watching in Rausu three times. "I'm opposed to commercial whaling; seeing whales close is so exciting."

Whale hunting was never big in Rausu, and though Hasegawa said there once was "trouble" with people hunting small Baird's beaked whales nearby, those fishermen now stay far from the tours and will tell him where to find orcas and sperm whales.

But he's dubious about whether demand for whale meat will ever pick up. Restaurants and hotels in Rausu avoid serving it.

"We get a lot of kids in summer vacations. If you tell them on the boat that 'this is the whale we ate last night,' they'd cry," he said.

"If they serve whale, nobody from overseas will come, especially Europeans," he added. "Given that the national government is trying to woo overseas tourists so much, its thinking (on whaling) seems a bit wrong."