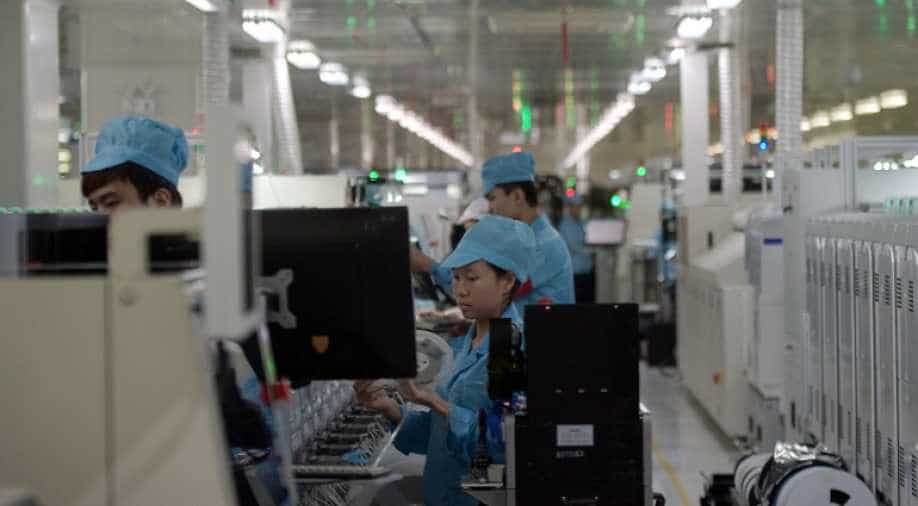 The crucial manufacturing sector is struggling in the face of weaker global demand and excess industrial capacity left over from a debt-fuelled infrastructure boom.

The data comes as China hosts an international summit showcasing its Silk Road plan, an ambitious infrastructure project it hopes will revive ancient trading routes and breathe life into its sputtering economy.

Industrial production rose 6.5 per cent from a year ago, the National Bureau of Statistics said, compared with 7.6 per cent in March and forecasts of 7.0 per cent in a survey by Bloomberg News.

Other figures also disappointed. April retail sales rose 10.7 per cent year-on-year, below the previous month's reading and estimates of 10.8 per cent.

Fixed-asset investment excluding rural areas -- a gauge of spending on real estate, roads and bridges -- rose 8.9 per cent in the first four months of the year, compared with 9.2 per cent in January-March.

"All the data sends the same message: The economy slowed down meaningfully in April," Larry Hu, head of China economics at Macquarie Securities in Hong Kong, told Bloomberg News.

"But given that growth is still fine, in the second quarter policymakers will still focus on reducing financial risk."

China's One Belt, One Road initiative -- a massive network of ports, railways, roads and industrial parks in Asia, Europe and Africa hailed by President Xi Jinping as "a project of the century" -- could provide fresh impetus for growth in the Asian giant.

In recent years China has been transitioning from an investment-driven economic model to one more reliant on consumer spending, but it has been a bumpy ride.

The crucial manufacturing sector is struggling in the face of weaker global demand and excess industrial capacity left over from a debt-fuelled infrastructure boom.

Years of unregulated and risky lending has also raised fears of a looming debt crisis that the International Monetary Fund has warned could "imperil global financial stability".

But analysts have expressed scepticism about Beijing's willingness to quit its debt addiction cold turkey given freewheeling credit has underpinned the growth China's Communist Party relies on for political legitimacy.

ANZ researchers said China appeared to be returning "to an investment-driven growth strategy" with projects such as One Belt, One Road providing a strong infrastructure pipeline.

In the first three months of the year China expanded a better-than-expected 6.9 per cent, raising hopes the economy was stabilising after the 2016 growth rate of 6.7 per cent, which was the slowest in a quarter of a century.

Still, analysts expect further deceleration this year and the government unveiled in March a trimmed 2017 growth target of "around 6.5 per cent".

"Slowing domestic consumption growth and softer external demand appear to have driven the slowdown in China at the start of the second quarter," said Julian Evans-Pritchard from Capital Economics.

The strength in infrastructure and property investment last month were not sustainable "given that policy is being tightened and the property market is starting to cool".