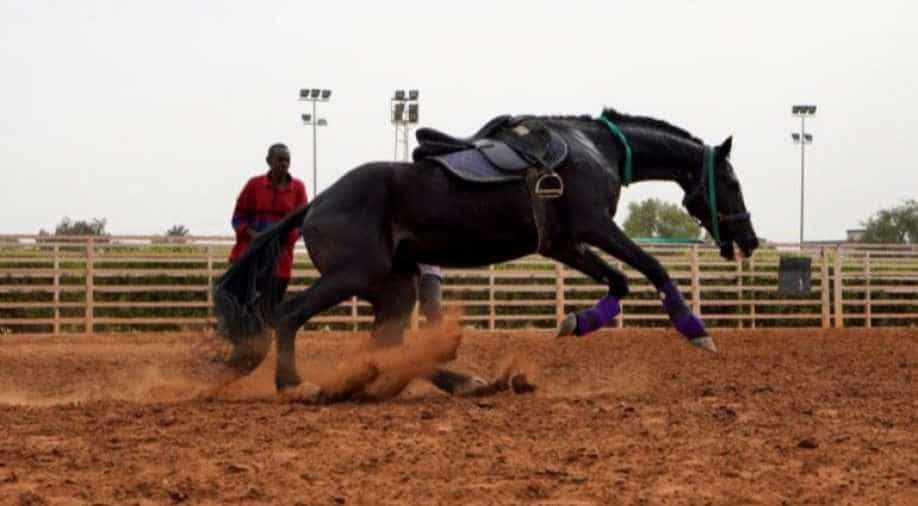 A Sudanese man trains a horse at the Equestrian Club in Khartoum, Sudan. Photograph:( Reuters )

Horse races were halted and attendance at equestrian classes dwindled after protests broke out in the dusty streets of the capital on the Nile river, with the loss of scores of lives as security forces cracked down.

For decades the Equestrian and Racing Club has given upper-crust Sudanese the chance to learn horse riding and watch horse racing in a shady compound set apart from the surrounding urban bustle of the capital Khartoum.

But the club has had to cut back activities since popular unrest erupted in December and led to the fall of autocratic President Omar al-Bashir in April, dampening higher social life.

Horse races were halted and attendance at equestrian classes dwindled after protests broke out in the dusty streets of the capital on the Nile river, with the loss of scores of lives as security forces cracked down.

"The main problem is that people don`t have enough cash (for the club), they're keeping it to live on, not to bring children to ride horses," said Rafat Awad, the club`s treasurer.

"You see the situation in our country, people dying. You can't just go and race. Some people are sad, some are angry, some still waging revolution, so we found it wasn't right to stage competitions."

The club was founded in 1908 under British colonial rule but betting on horse races ended in 1983 when sharia (Islamic law) took effect. Before being halted, horse races were run through sponsorships and some 200 horses are kept in the club's stables.

There has been a modest resurgence of visitors to the club in recent weeks as violence has eased following a political transition deal between the temporary ruling military council and opposition leaders.

Around two dozen people, including children, come for riding classes in the evenings, after the searing daytime heat eases, often watched by their families.

Lessons are offered daily except Friday, the Muslim holy day, for 1,400 Sudanese pounds (nearly $20) a month - a sum beyond the means of most Sudanese, let alone the cost of buying and keeping a horse at the club.

Some female club members describe how they`ve had to overcome the disapproval of women participating in a sport that is common in strictly Islamic Sudan.

"If your family members are interested, it's easier than if you start on your own," said Einas, 18, who has been riding for one year. Her father has racehorses and has won competitions. She said that in Sudan, however, racing was mainly a man`s sport while women often practiced show-jumping.

Twenty-four-year-old Sagada, a club member who had been riding for 11 years, said: "My mum brought me here, my family doesn't mind that I'm a woman riding.

"It can be a bit hard - some people disapprove of how we are dressed," she added, referring to tight-fitting equestrian garb.

No, 5G waves do not transmit coronavirus!