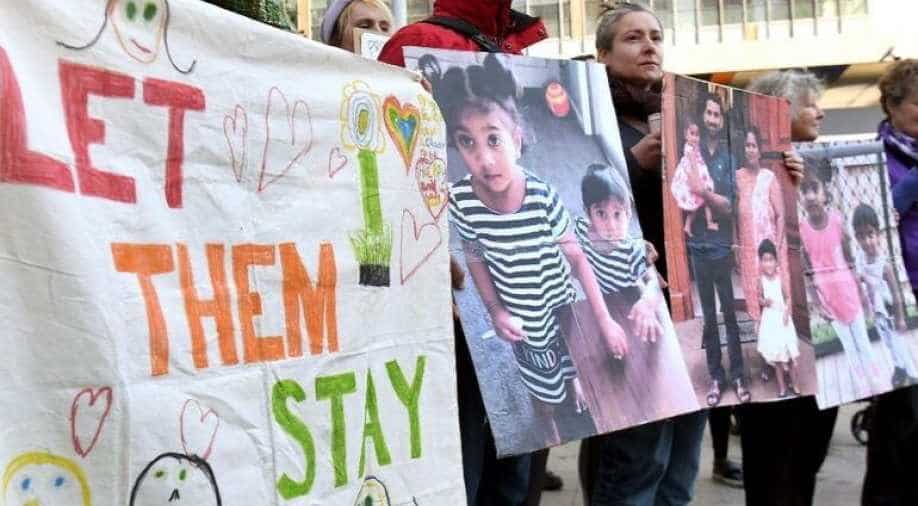 File Photo of the Protest to release Tamil family in Melbourne. Photograph:(AFP)
Follow Us

The family of four has been held at the Christmas Island detention facility for the past month while their fight to stay in the country is before the courts.

The United Nations has called on Australia's government to release a Tamil asylum seeker family from offshore detention, weighing in on a case that has galvanized huge public support.

The family of four has been held at the Christmas Island detention facility for the past month while their fight to stay in the country is before the courts.

Kokilapathmapriya Nadesalingam and Nadesalingam Murugappan, from Sri Lanka, arrived in Australia by boat separately in 2012 and 2013 seeking asylum and have not been accepted as refugees.

Their two children, Kopika and Tharunicaa, were both born in Australia and the family's legal battle hinges on the youngest daughter as her lawyer argues her claim has never been assessed.

Lawyer Carina Ford made a submission to the U.N.'s Human Rights Committee last month on the toddler's behalf.

In an October 1 letter, seen by AFP, the committee says in response that it "has requested the State party to transfer (the family) within 30 days into a community setting arrangement or to find another way to end their existing situation of detention".

The government did not immediately respond to a request for comment.

Family friend Angela Fredericks described the U.N.'s position as "a positive step forward", saying she hoped the government "would comply and take this on board".

"We do see this as confirmation of what we've always known: that detention isn't any place for children or for families," she said.

"We've seen that over the last 19 months with the emotional and physical damage that has occurred to these girls."

Australia's hardline immigration policies include turning away refugees arriving by boat and de facto offshore detention, both measures condemned by the United Nations.

The Tamil family settled in a small rural Queensland town of Biloela, where their neighbours have banded together to push for them to be allowed to remain, a campaign that has received support even from some right-wing commentators and politicians.

A Federal Court judge ruled last month there was enough evidence for the toddler's case to go to trial, though a date has not yet been set.

Both children were born in Australia but do not have citizenship. They have never been to Sri Lanka.