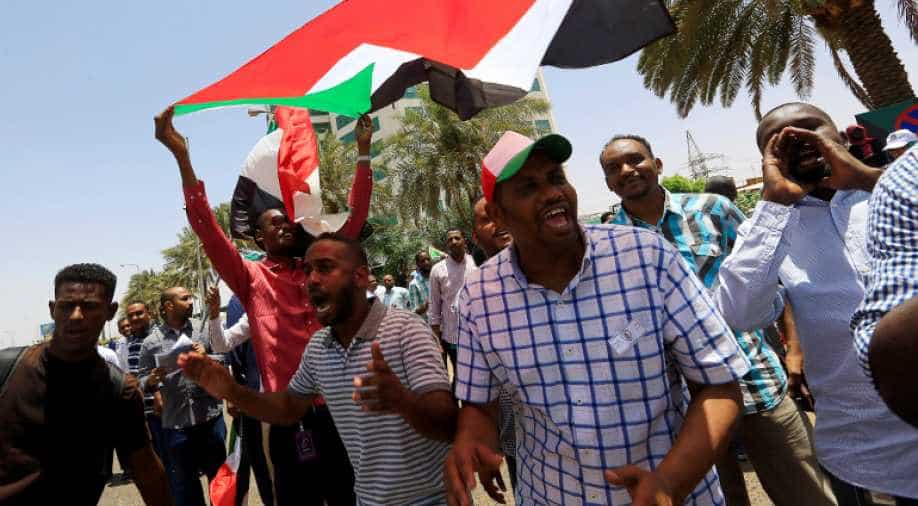 Members of Sudan's alliance of opposition and protest groups chant slogans outside Sudan's central bank during the second day of strike as tensions mounted with the country's military rulers over the transition to democracy in Khartoum, Sudan. Photograph:( Reuters )

No details were provided on the number of staffers leaving Khartoum, where there is a large UN presence of 27 entities, mostly UN aid agencies.

The United Nations is moving some of its staff from Sudan, a spokeswoman said Wednesday, as the death toll from a crackdown on protesters soared to more than 100.

No details were provided on the number of staffers leaving Khartoum, where there is a large UN presence of 27 entities, mostly UN aid agencies.

The United Nations also runs a peacekeeping mission in Darfur with the African Union, where about 7,200 troops and police are deployed.

Sudan has been engulfed in turmoil since security forces on Monday violently broke up a weeks-long sit-in by protesters demanding an end to military rule.

The Central Committee for Sudanese Doctors close to the protest movement said on Wednesday that at least 108 people had been killed in the crackdown.

Forty bodies have been recovered from the Nile river, they said.

A military council has ruled the country since the ouster of President Omar al-Bashir on April 11, following months of protests against his three-decade authoritarian rule.

Army ruler General Abdel Fattah al-Burhan announced Tuesday that he was scrapping a plan for a three-year transition period and would hold elections within nine months.

Western powers have warned that snap elections will crush hopes for a democratic transition in Sudan and have called for a return to negotiations.